‘We lay a trail of breadcrumbs to lead through the opera’ 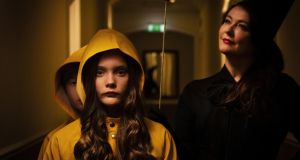 Amelie Metcalfe and Carolyn Dobbin: Hansel and Gretel is the first opera that Theatre Lovett have produced. However, they have a long history of working with music. Photograph: Ros Kavanagh

This must surely be the most festive rehearsal room in the history of opera. The conductor, Richard Peirson, is wearing a party hat, popping marshmallows into his mouth as he plays the piano. Soprano Carolyn Dobbin is pulling a series of grotesque faces, trying to figure out how far she can twist her mouth without losing the high notes. “Hocus pocus, bonus jocus,” she shrieks, getting so carried away by her own malevolence that she starts giggling. “Perhaps there are some sort of protocols we are breaking when it comes to rehearsing an opera,” laughs Muireann Ahern, co-director with Louis Lovett of a new production of Englebert Humperdinck’s opera Hansel and Gretel. “But it’s important that we are being a bit irreverent. It is important we are having fun.”

Ahern is one half of Theatre Lovett, which has been tasked by Irish National Opera with staging Humperdinck’s opera for a family-friendly production on the main stage of the Abbey Theatre. Artistic director of the INO Fergus Sheil explains how the project has evolved from the germ of an idea about collaboration to the elaborate production unfolding around us in the Artane School of Music. “There was a tradition long ago in Ireland that opera was something connected to people’s lives, along the way it became very detached. So, now, you could go through your life easily in Ireland and never see an opera, never hear opera music.” When the INO was founded in 2018, he says, “we set ourselves a challenge. How can we engage with people who might never have had the chance to see or hear opera before? Reaching out to audiences from different backgrounds is one way, so we started collaborating with people from different disciplines, having Enda Walsh or Emma Martin direct, say, plundering talent from wherever we find it so that we could give audiences who are interested in theatre or dance an opportunity to see something they might not otherwise be interested in. Or – like in this collaboration with the Abbey, or by touring to different regional venues – putting opera somewhere where people might not expect to see.”

Reaching out to young audiences, he says, “is another way of expanding our reach. Now some of these audiences may not like it, and that’s fine, but there are others who will have a window opened for them to a form they might have never considered seeing or listening to.” Last year’s production of Rossini’s La Cenerentola at the Bord Gáis Energy Theatre, which has been nominated for best production and best set design at this year’s Irish Times Theatre Awards, was a starting point. The fairytale subject matter and the sumptuous storybook set design by Nicky Shaw proved an attraction for families, as did the special half-price offer on child tickets. However, a running time of three hours and the Italian libretto meant that the material itself also presented a challenge for young audiences, both in terms of stamina and comprehensive.

With the programming of Hansel and Gretel, the INO had a young audience in mind from the very beginning. Humperdinck’s Märchenoper (fairy-tale opera) was composed at the urging of the composer’s sister, who had written a version of the Grimm fairytale for her children and was keen for her brother to animate it with music. The story is told from the perspective of the children, and features magical creatures like the Dew Fairy and the sleep-spelling Sand Fairy. The music, meanwhile, draws from the German folk repertoire and incorporates German nursery rhymes. It also includes a children’s chorus (pre-recorded with Cór na nÓg for this version), whose pure voices add an extra layer of accessibility that young ears will particularly respond to. “We are also singing it in English rather than the original German,” Sheil explains. “It’s our first time not to do something in original language and that’s a departure deliberately conceived to encourage family audiences.” The collaboration with Theatre Lovett, leaders in family theatrical entertainment, meanwhile, is another key strategy for creating a piece that will communicate with an audience not necessarily literate in opera.

Hansel and Gretel is the first opera that Theatre Lovett have produced. However, they have a long history of working with music. Indeed, their own version of the Grimm fairytale, The True Story of Hansel and Gretel, boasted an original score, its own chorus of children and an operatic flourish for a soprano voice. An Elf Stood in the Forest from Humperdinck’s score also found its way into their 2014 show Mr Foley’s Radio Opera. So, Theatre Lovett were aware of the opera before INO invited them to collaborate. Lovett describes it as “a gorgeous collection of catchy tunes and Humperdinck has them coming fast; you aren’t just hanging out waiting for [the] famous aria.” The challenge, the directors believed, then, would not be the music itself but “creating a bridge between the music and what is happening on stage”, as Ahern explains. “Opera is all well and good, but there is only so much a young audience can take if the cast is constantly singing. They need something to carry them through from one part of the story, one part of the music, to the next.” In their approach to staging the story, Lovett says, “we lay out a trail of breadcrumbs, creating moments or stepping stones to lead the audience through the opera”. Effectively, this creates “a release valve from the metronomic score through the imagery of our two young children and our Watchman”, who play out a parallel version of the story for us.

Theatre Lovett and their design team have also created a way of including the music in the stage picture by putting the players on the stage. “We like to think about the show starting before the audience has even entered,” says Ahern. “So, for the orchestra to be in the pit, tuning up, and for that not to be part of the show, just doesn’t make sense for our kind of theatre.” To that end, a reduced orchestra of seven have been cast as accomplices to the witch. “They are her sidekicks throughout, luring children into the witch’s house with their music.”

“It is a lovely thing to see the players, especially for a young audience,” Lovett acknowledges. “It makes the music real for children.”

“And of course if we say children, we actually also mean any adult,” Lovett concludes, “because what we are creating is something we want to be enjoyable for audiences of any age.” Hansel and Gretel “is a rich, musically fantastic full-on two-hour opera production. Humperdinck’s opera would not be known categorically as an ‘opera for children,’ but unlike many operas, it is an opera children can access. But that doesn’t mean it should be exclusively for younger audiences, in the same way that opera shouldn’t be exclusively for adults.”

Operas for all ages: Productions with child appeal

Where better to start than with a modern children’s classic? Long before Spike Jonze ever got his hands on the much psychoanalysed material, Maurice Sendak’s well-loved fantasy – about a young boy who embraces his wildness in a vivid imagined escape from domestic confines – was transformed into an opera. Sendak himself was involved with libretto and the incredible original production design, while Oliver Knussen’s colourful score brings just the right balance of dark and light to Max’s journey. The Wild Rumpus is a particular highlight. At 45 minutes, it is the perfect length for the first-time opera-goer.

With a cast-list composed primarily of animals, Czech composer Leos Janácek transforms the stage into a bucolic paradise, where nature thrives and a wily vixen outwits friends and foe. Based on a contemporary newspaper comic, the traditional story remains fresh, while the positive affirmation of the three-act cycle ensures sensitive young audiences get a happy ending. The folk influences of the score, meanwhile, make the music more accessible than Janácek’s earlier, experimental reputation might suggest.

French writer Collette is best known for the coming-of-age series, Claudette. Her 1925 collaboration with Ravel, blended ballet, music and storytelling, centering on a rude child who learns his lesson when the objects he abuses come to life to take their revenge. It is brilliant fantasy with characters that include a china cup and a grandfather clock, which were surely an inspiration for Disney’s Beauty and the Beast, while Ravel’s score foregrounds voice-over instrumentation, giving an opportunity for children too to sing.