Geoff Barrow of Beak: ‘We’d do an album every three months if we could’ 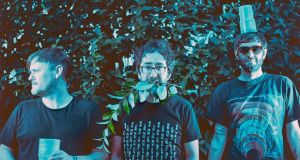 On Beak’s third album, >>>, Barrow (left) delves deeper into the role of lyricist and vocalist

“We’re big Lankum fans,” Geoff Barrow says over the phone one January evening. “To sound unique within something you think has been done so much that it can never transform into something new; that’s the most amazing thing about them,” he explains on his way home from the studio. Immediately, our conversation is steered by a shared excitement for the Dublin-based trad experimentalists who have earned widespread acclaim for their third album, The Livelong Day.

The quartet recently performed at Beak>Ender, a weekend of music curated by Barrow’s band Beak, held in Leeds last December. It’s evident the Dubliners left a lasting impression on Barrow and his bandmates. Radie Peat, multi-instrumentalist and vocalist with Lankum, will open for the Bristol-based electronic-rock trio at their forthcoming gig in Dublin’s Button Factory; bringing Beak to the end of a succinctly scheduled European tour.

Having discussed Lankum’s many attributes at length, Barrow briefly hones in on Peat. Unprompted, he describes similarities between her and a formative figure from his 30-year career in music – which has seen him evolve from founding member of 1990s trip-hop pioneers Portishead to producing music for various artists (The Horrors and Arcade Fire), setting up a record label, and composing scores for film and television; notably, Alex Garland’s independent sci-fi hit Ex-Machina.

“When I met Radie, talking to her and hearing her sing, you know, she’s the closest person I’ve ever met to Beth [Gibbons, of Portishead],” he remarks earnestly. “I felt the same way when I met Beth and heard her sing, where you say, ‘Everything else can f**k off!’ Because you’re utterly transfixed watching them perform.”

Similarly, Beak’s live shows can utterly enthrall audiences. Across three albums, the trio – multi-instrumentalists Billy Fuller and Will Young complete the set – are regarded for allowing their sound ample time and space to navigate as many tonal avenues as possible. Always achieving excellent pace and fluidity across their dynamic melodies. This embrace of musical exploration has become integral to Beak’s immersive catalogue. Primarily characterised by improvisational play (“We try to play without any kind of instruction, to begin with. Sometimes we have references – we always send tunes we’ve found to each other”), the arrangements are often anchored by Krautrock and experimental-rock motifs traced back to early German electronic champions, Can and Faust.

The spontaneity of Beak’s sound echoes their fortuitous beginning. In 2003, Barrow founded Invada Records (the band joined its roster upon formation) as a joint venture with friend, venue owner, and promoter Paul Horlick. From the offset, the label focused on music born outside the parameters of alternative music. During the festive period, the label hosts an annual party where the artists and members of the Invada team perform throughout the evening. At the 2009 seasonal soirée, Barrow jammed with Billy – who was signed to the label under his Fuzz Against Junk moniker – and Matt Williams, who left the band in 2016 to pursue other musical endeavours.

“It was massively freeing for me,” recalls Barrow of that performance. “I’d been in [Portishead] which was, through my fault, very controlled. We’d never change anything with each gig, it was always what it was. After Billy, Matt and I played together, I said, ‘That was cool. Should we do it again?’”

This promptly led the newly-formed Beak to record their self-titled debut with sessions amounting to 12 days of constant free-form playing in one room with no overdubs. “We turned up at the studio, I set up some keyboards and Billy showed up with his amp. We didn’t say anything to each other beforehand and literally, the first song we played was Blackwell, the opening song on our debut album. We didn’t play it again. What you hear on the album is just what happened. That was the most musically refreshing thing I’ve ever done. It didn’t matter whether it was good or not. I was just enjoying playing music. I felt like a teenager again,” he remembers.

I never considered singing, ever


By the time Will replaced Matt in 2016, the band had released two records (Beak> and >>) and completed the soundtrack for Tom Geens’s 2015 film, Couple In A Hole. A third album (>>>) followed in 2018, to critical acclaim. In spite of maintaining a respectable interim between records – by most bands’ standards – in the absence of strict schedules instilled by major label executives, Barrow says that Beak would put out albums constantly were they not faced with the realities of being in a band with limited resources.

“We’d do an album every three months if we could,” he proclaims. “We’d happily sit in the studio 360 days of the year and make music that makes us happy. There’s no doubt in that. It’s just that life doesn’t allow us to do it.” Life, in this instance, translates to paying the bills. Coinciding with their Beak duties, each member holds a regular stream of work to maintain a steady income.

“We’re all older and have jobs; whether that be in music or painting. Will works with his partner Penny [Mills] who’s a set designer, Billy plays guitar with Robert [Plant] and I do soundtrack stuff. Beak is never going to get to a point where we can pay our mortgages from it. Unfortunately, it has to be treated that way. But it’s not a project,” he firmly attests. “We’ve always fought with people who say: ‘It’s a musical project.’ That suggests it’s a side project to something main. But it’s not. Beak is as important as Portishead or any soundtrack I’ll ever write.”

That accomplished musicians are still faced with double-jobbing to facilitate the fulfilment of creative freedom is indicative of the long-term effects of widespread damaging habits in music consumption. Here, Barrow’s attention shifts to how, ultimately, streaming services exploit artists.

“When you self-release and get a distribution deal that puts [your music] on Spotify, people can listen to you for nothing. I know so many bands that have worked hard, self-released music, gotten a distribution deal, end up on Spotify, and then have to break up.” The antidote to this problem? “People coming to your gigs, buying merch and I always think that Bandcamp is a better [resource]. At least you can pay the bands when you listen to their music. Even if it’s 50 quid, that pays for petrol or renting a van.”

I’m going to be 50 soon and the idea that we’re playing gigs and people want to see us; I’m incredibly grateful


This mentality has inspired Barrow to delve deeper into the roles of lyricist and vocalist, as heard on >>>. Although he remains extremely modest in this pursuit. “I never considered singing, ever. On the first Beak album, there were a couple of vocals but they were weird kind of ethereal things – just me, Bill and Matt singing on top of stuff.”

He continues, “Instead of being an instrumental band, because [they] can be incredibly boring, you’re just going down these rabbit holes of indulgence – there’ve been times when we’ve written things and they felt like verses and choruses. So, I’ve chugged in a vocal on it and Billy sings a harmony. To be honest, I still don’t consider myself a singer or lyricist but there are a couple of things we’ve hit on that I’ve really enjoyed, like When We Fall,” he says.

Set against a sweet melody steadily picked on electric guitar accompanied by a stunning string arrangement, When We Fall has become an anthem at Beak live shows. As the instrumentation evolves, bringing forth electronic elements pulsating atop drums crashing like waves, a layered harmony delivers a hopeful incantation: “And we will be assured for what we believe can return to us all.”

“I’ve wanted to write a song like that all my life,” Barrow declares. “It’s an expression of how I feel about humans, the planet and things like the feudal system. It’s about how working-class people have always been used by the aristocracy, it continues to happen so my lyrics end up in that world.”

With a European tour already under their belt before the first quarter of the new decade is complete, what else is on the cards for Beak in 2020? “At the moment, we’re working on another record,” Barrow reveals. In the same breath, his excitement redirects him to the overall joy of being in the band. “We have fun playing live and recording which is something so rare and brilliant. I’m going to be 50 soon and the idea that we’re playing gigs and people want to see us; I’m incredibly grateful for that – we all are. I know that sounds very Coldplay of me, but it’s true.”

Beak will perform at The Button Factory, Dublin on February 6th.