Gig of the Week: the Spike Cello Festival 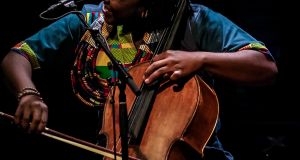 The playful provocations of the Spike Cello Festival are a joy to behold, particularly as they nudge punters through the depths of winter with their wily, waggish ways. Now in its fourth year, this boutique weekend festival has managed to lure lovers of classical, contemporary, traditional and folk music to concerts that dispense mischievously with any and all preconceptions of what this most divine of instruments can or should be, or with whom it should consort.

Following last year’s spectacular performances by Dutch cellist and master improviser, Ernst Reijseger along with traditional concertina/fiddle duo of Liam O’Connor and Cormac Begley’s collaborations with Cello Ireland, the bar was set high for all that followed. And this year’s programme doesn’t stint in either the lodger’s reach or the hairpin bend departments.

Weird, wonderful and downright wacky, this year’s piquant choices run the gamut of yoga cello (a self-care practice of yin yoga, live cello, silence and poetry jointly led by yoga teacher, Kitty Maguire and cellist Anna Marcossi) to children’s events, to an entire afternoon of cello improvisations and in there somewhere, are a select handful of concerts that will challenge and cajole listeners into spaces where it’s likely they’ve rarely, if ever, ventured before.

The lateral thinking shaping the range of events mirrors the refreshingly disparate mix of guests, from Iceland and South Africa, not to mention New Zealand, Britain, and anchored by the Renaissance woman who is Kate Ellis: a stalwart of the Irish classical and contemporary music scene, and a musician who never stints in her pursuit of adventurous collaborations.

With the festival’s new venue of Lost Lane, there’s an air of anticipation that this year’s headline concerts will encourage even closer communion between artists and audience, with the emphasis firmly focused on letting punters in on those fleeting moments that propel musicians to another plain in the midst of live performance.

Friday’s opening concert features South African cellist, Abel Selaocoe and Celtic Cello’s Clíodhna Ní Aodáin. Both use their cellos and voices in improvisation to stretch to the outer reaches of their instrument’s range, with Selaocoe using singing and body percussion to throw into sharp relief his melding of Western and non-Western musical traditions. Clíodhna Ní Aodáin performs as a soloist and chamber musician internationally, and is just as comfortable improvising, so this pairing promises not one whit of predictability in what is likely to be a very moveable feast of a repertoire.

And so it goes. Further highlights include Sunday night’s closing concert from Glasshouse, a noon concert at the Hugh Lane Gallery on Sunday from the Irish Chamber Orchestra’s principal cellist, Christian Elliot, followed by an entire afternoon of improvisation from eight cellists in the gallery foyer, aptly titled Cellinstallation.

And for the cellists, there are even more stimulating workshops with Abel Selaocoe focusing on improvisation and Clíodhna Ní Aodáin’s Music and Mindfulness Workshop exploring how breath, posture and gesture influence sound.

Spike Cello Festival can hardly lay claim to a lack of imagination or of chutzpah, and this year’s programme looks set to lure an even more diverse audience.

True History of the Kelly Gang: How an Irish bandit became Australian antihero
9