Richard Dawson: ‘I don’t want to tell people what to think’ 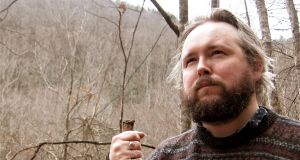 Richard Dawson is one of the most interesting and emotionally resonant musicians in the UK. On his latest record 2020, Dawson plays strangely jarring but beautiful guitar and synth motifs, over which he moves from a powerful folk baritone to a sweet, soulful falsetto, in order to tell beautifully observed stories about anxiety-prone jogging enthusiasts, flooded publicans, austerity-jaded civil servants, exhausted, ennui-filled warehouse workers and a homeless person sharing an alleyway with a dead dog.

He gets a lot of small details into his songs about the frayed but extraordinary edges of ordinary lives. In some ways, 2020 feels like a post-Brexit state of the nation address, but when I meet Dawson in the Bodega, a pub in Newcastle, the city where he lives, he says that that wasn’t his intention.

“I only wanted to try and maybe make a kind of [document of] how it really feels, what the world is like,” he says. “I don’t want to tell people what to think. I admire a lot of people who make protest art but sometimes it can be polemical and didactic . . . I didn’t want [the album] to be about my feelings on things. There is one line in The Queen’s Head which is about the ‘fatheaded butcher’ when I was thinking about those f**king fatheaded pigs Nigel Farage and Boris Johnson. Conmen. That’s the one place in the record I think the writing is not so good.”

In this song about a flooded town, he sings: “There’s a crowd gathered around the fat-headed butcher, who’s back on his soap box again, bemoaning the lack of adequate flood defences, somehow putting it down to an upsurge of benefit-scrounging immigrants.”

So does he regret the directness of that line? “No. It’s like punching a hole in it. It’s not really in keeping with what the character would say, but I think it’s good to have it. It feels worth it.”

Although Dawson sings in the first person, his recent lyrics are all written in character. This approach isn’t strange in literature or folk music but it’s not common in rock and consequently people can become confused.

A number of listeners took the story of his song Jogging – about a redundant school-councillor turned freelance graphic designer who deals with his anxiety by jogging – to be autobiographical.

“I got some emails off people after I said that I actually hate jogging, [who said] ‘that song means so much to me and I was so disappointed’. . . And loads of people were trying to sponsor us as well.” (At the end of Jogging, the character asks if the listener will sponsor him in a charity run.)

Why does he think people struggle with fiction in songs? “I think I’d say that people’s expectations have been lowered about what a song can do. I don’t know if that’s because of the way songs have been used to sell us things or what. I don’t think it’s a bad thing if someone is singing about themselves. It’s just you can do more. . . Whether it’s politics or morals or emotions, it seems like a vital thing to be able to put yourself into someone else’s shoes and see things from multiple perspectives.”

I ask him again about his relationship to the “guy in Jogging”. He laughs. “It’s not necessarily a guy,” he says. If I listen carefully, he tells me, he’s doesn’t gender the protagonists in most of his songs.

One part in 2020 that is, in fact, directly autobiographical is the opening verse of Black Triangle, in which the narrator and his friend “Neil” are returning from an “Oriental buffet” when they see a UFO. “That was real,” says Dawson, unexpectedly. “Maybe I didn’t have a Doctor Pepper with my Chinese buffet. I think that evening it was a Coke . . . And the song isn’t about me or Neil. At a point in the song it diverges.”

I do think contradiction is like a governing force

Another song on the record, Civil Servant, was also inspired by a real event in Dawson’s life. It’s about a civil servant who can’t face hearing “the strangled voices of all the people that I’ve failed”.

It’s informed by Dawson’s own experience of Britain’s social security bureaucracy. Dawson had been in receipt of the disability living allowance because he has an eye condition called juvenile retinoschisis. Under the Tories’ “reforms” the rules were changed and he lost the payment.

“Not only did I not qualify but I got zero points across the board . . . I had a kind of shit time appealing it and then took it to tribunal and won eventually. The Royal National Institute for the Blind helped us. They were totally amazing.”

How is his eye condition at the moment? “It’s a very steady decline and then it will probably hit a sharp decline at some point. It’s getting slightly worse over recent years but nothing drastic.”

He initially tried to write a song about his experience of the system, he says, documenting the ins and outs of the application process. “I just couldn’t do it. I couldn’t deal with it. I thought, next best thing, what’s the most compassionate thing you could do?”

So, he wrote about a civil servant who can’t take the coldness of the system anymore. “The song’s pretty troubling, I think, in a way the others aren’t, in that the rest of the people [in the songs] are quite hopeful and not disaffected.” He sighs. The way the Tories have dismantled the welfare system, he says, “is very considered. It’s not a ‘broken’ system. It’s working very well from a certain point of view.”

Part of the reason he’s reluctant to get into the political ramifications of his songs is that the process of their creation is increasingly mysterious to him. “Over the last few years the music becomes more like a plant. It grows and you just obey it . . . More and more I’ve come to think of it as really some kind of conscious, alive creature.”

Why with his last album, Peasant, did he set all his songs in the pre-medieval world (Peasant is set between 500and 800AD)? “It was quite a blank canvas compared to [the] period before it and what had been written was by the educated rich folk. It’s set in the old north when it was all feudal states. Yr Hen Ogledd, that’s the Welsh name for the old north [this is also the name of one of Dawson’s side projects] after the withdrawal of the Roman empire. What’s amazing is that when the Romans would go, whole towns were just empty because the Britons didn’t trust these new cities . . . It was also a point in history where a lot was up for grabs in terms of how society was going to be run.”

So there’s a parallel with today? He shrugs and laughs.

Does he worry that pinning a work’s meaning down too much might damage it? “I think you do have to be careful because you spend a lot of time designing something and you don’t want to undermine it by saying: ‘Here’s a rich three-dimensional fungi, let’s put it in a book.’” He mimes squashing it. “By the same token, I’ve definitely been guilty of not wanting to talk and not taking responsibility for ideas.” He laughs. “I do think contradiction is like a governing force . . . almost like gravity. Contradiction is a really vital energy in the world.”

Dawson is kept pretty busy. He has been collaborating with the Finnish art-metal band Circle (he insists that I’m the spit of their founder, Jussi Lehtisalo, and he shows me a picture to prove it). He’s also a member of the excellent oddball pop group Hen Ogledd with his partner Sally Pilkington as well as Rhodri Davies and Dawn Bothwell. I tell him that my seven-year-old nephew loves the Hen Ogledd song Tiny Witch Hunter. “That song has been a big hit with the kids,” he says. “We’ve got a kid’s gig in the middle of February so I’m looking forward to doing that.”

Dawson likes working with other musicians but on 2020 he played every instrument himself. “I felt it was important that I play everything, like the first Foo Fighters album . . . I wanted it to feel like a rock sound with big choruses but that there’s also something about the experience that’s hopefully awkward . . . Playing everything lends itself to that. I play the drums one at a time so it’s not going to have the same flow as a proper drummer . . . Sally, Rhodri and Nev [Clay, a friend] all join in on the last fifteen seconds of the album, so hopefully that means something.”

Community seems important to him. He buys me a pint (“You’re a guest in our town”) then invites me to join a hastily conscripted pub quiz team with Sally and Nev Clay (“The best songwriter in Newcastle”). Alone in Newcastle, I do so happily. We come sixth, faltering over a round about football anthems.