Underworld, Jorja Smith and Hot Chip among the main acts for Dublin festival 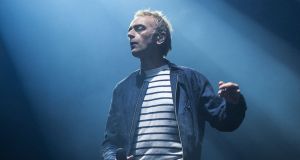 Jorja Smith, Underworld and Hot Chip are among the headline acts that have been announced for the 2020 Forbidden Fruit Festival in the ground of Royal Hospital Kilmainham, in Dublin.

Weekend tickets are already on sale for the 10th-anniversary festival, which is taking place over the bank-holiday weekend of May 30th and 31st, with Saturday-and-Sunday tickets available from €124.50. Day tickets go on sale at 9am this Friday, on ticketmaster.ie.

She will be joined by the South Korean DJ Peggy Gou, one of the UK’s hottest rappers, Loyle Garner, and the electronic dance producer Fatima Yamaha.

The 1990s underground techno pioneers Underworld will headline on Sunday, when the bill also features Hot Chip, making their Forbidden Fruit debut, and the Dublin band The Murder Capital.

Forbidden Fruit is running a pop-up on Coppinger Row, in Dublin 2, from today until Friday, offering tickets at early-bird prices.