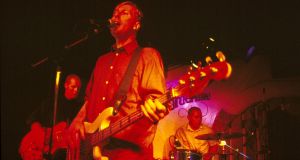 Bassist and vocalist Paul Linehan described the song as “a celebration of life and the value of relationships even when they have their ups and downs”. Photograph: Jon Lusk/Redferns

It may never actually mention Cork but The Frank and Walters’ hit single After All has been voted Cork’s Favourite Song, seeing off other famous Leeside anthems as The Banks of My Own Lovely Lee.

The competition, organised by Cork City Libraries and Creative Ireland, began last November when a total of 84 songs were nominated by Corkonians with the full list being whittled down to 10 contenders for which people could vote.

Cork City senior executive librarian Patricia Looney explained the idea for the competition came from the Cork City boundary extension in 2019, which saw the city expand into the county but not without some rumblings of discontent.

“Last year with the extension, there was a lot of talk of people not wanting to join the city and feeling they were losing something, but there is something that unites is all in Cork and it’s our shared interest in music,” she said.

“I mean the Banks of My Own Lovely Lee is as much an anthem for somebody in Ballincollig or somebody in Castletownbere as it is for some from the heart of the city so that’s where the idea for the vote came from.”

Those that made the final cut were an eclectic lot, giving Corkonians of every stripe plenty of options - from well established favourites such as The Boys of Fair Hill and An Poc Ar Buile to the more recent gem, The Langer Song.

Rory Gallagher’s homage to Cork, Going to My Home Town, also made the cut as did John Spillane’s ethereal Prince’s Street and Mick Flannery’s haunting Safety Rope and The Sultans of Ping FC’s zany Where’s me Jumper?

But, according to Ms Looney, The Frank and Walters led from the off, winning both a majority of online and physical votes handed into Cork City Libraries branches and it comfortably topped the poll of 5,215 votes.

Lord Mayor of Cork Cllr John Sheehan commended Cork City Libraries for their initiative at a ceremony at the Grand Parade Library where, after MC Trevor Welch oversaw performances of all 10 songs, the winner was announced.

The Frank and Walters were not able to make it along to see t heir hit single, which made it to No 11 in the UK charts in 1993, performed by the High Hopes Choir but they were suitably pleased when informed of the result.

Bassist and vocalist Paul Linehan, who described the song as “a celebration of life and the value of relationships even when they have their ups and downs”, admitted he was surprised but delighted at the win.

“I wrote it about the girlfriend I was going out with at the time in 1992. I was back and forth to London a lot at the time and I wrote most of it over there but I wrote the chorus back in Cork but it was just another song at the time.”

He was keen to pay tribute to The Young Offenders for giving After All a new lease of life in the episode in which hardened but hapless lag Billy Murphy, played by Shane Murphy, hijacks a bus and gets everyone on board to sing the song.

“The Young Offenders gave the song a whole new lease of life - they did an amazing job and it worked so well in the scene - we couldn’t have wished for anything better and it definitely moved the song up a notch in people’s minds.”