The Hunger: A mixed-media opera about the Famine 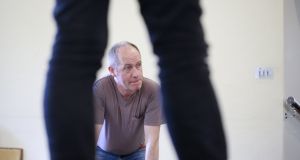 The sean-nós singer Iarla Ó Lionáird is digging a grave on a special earth-filled platform in Wesley House off Dublin’s Leeson Street. Standing near him, singing eerie melodies with a rich pure tone, is the soprano Katherine Manley. From time to time Ó Lionáird responds in his own softer, earthier, no-less beautiful voice.

It’s a rehearsal of Donnacha Dennehy’s opera, The Hunger, as produced by Tom Creed and the Abbey Theatre with music conducted by Alan Pierson and played by the Crash Ensemble, the contemporary music ensemble Dennehy established in 1997. “[Donnacha] changed Dublin,” says Ó Lionáird. “He changed me anyway.”

Ó Lionáird and Manley are enacting the story of Asenath Nicholson, represented on stage by Manley, who travelled to Ireland in the 1840s to provide famine relief and wrote about it in a book called Annals of the Famine in Ireland. That work formed the basis for Dennehy’s opera.

He and Creed didn’t stop there, however. They also went to political commentators like Noam Chomsky, economists like Paul Krugman and historians like Nicholson’s biographer Maureen Murphy to record their assessments of the Famine. These recordings have also been incorporated into the piece.

Occasionally, during rehearsal, Manley and Ó Lionáird break off from performing to ask Creed questions. At one point, Ó Lionáird’s character cowers before being given food to eat by Manley (for rehearsal purposes the food is represented by a paper bag).

“Let’s go from the beginning,” says Creed a little later.

“Just as well I’ve skill with a shovel,” says Ó Lionáird at another point. “That’s how I got this gig. I’m handy with a shovel.”

They performed a version of The Hunger before, in the Brooklyn Academy of Music with Pierson’s New York-based chamber orchestra, Alarm Will Sound. However, that was when it was more of a concert piece, not the longer operatic work it is now. And while Ó Lionáird has worked with Dennehy before on the acclaimed sean-nós-tinged Gra agus Bas, he is self-deprecating about his lack of operatic training. “I can walk and I can talk and do a small bit of singing but I’ve never had to do them all at the same time,” he says.

Manley is a bit more accustomed to such things but says she is in awe of Ó Lionáird’s technique. “Sometimes I get lost listening to him on stage and have to check back in with the conductor.”

Who was Asenath Nicholson? “She was somebody who ran a house in New York for poor people,” says Manley. “She noticed there were more poor Irish people coming in so she made the miraculous decision to take the boat over – which might have killed her – and gave famine relief and documented what she saw.”

“She felt compelled by her faith to do that,” says Ó Lionáird. “She probably wrote the best first-hand account of what was going on on the ground.”

“She came here twice,” says Creed, “once before the Famine and once during the Famine and she travelled on her own in the west of Ireland and wrote letters and newspaper articles looking for money [to help].”

For Alan Pierson the project began with Dennehy’s Gra agus Bas which he conducted. “It was the beginning of Donnacha connecting traditional Irish music and sean-nós singing through Iarla to the world of contemporary music,” he says. “Inspired by that, Alarm Will Sound wanted to do something with him. Donnacha came up with the idea of doing something on the Irish Famine based on the journals of Asenath Nicholson and bringing Iarla into that as the voice of the Irish people.”

Over the course of the show, Manley sings in her own more classical idiom and in English while Ó Lionáird sings pieces of Irish language songs from the 19th century that Dennehy has incorporated into his score. “In his own particular way,” says Ó Lionáird and everyone laughs.

All these different sonic worlds come together over the course of the piece, says Pierson. “[They] come more and more together and you begin to hear Iarla’s sean-nós inflections begin to influence Kate – these moments of connection that happen.”

Why is sean-nós important for this story? “Sean-nós is largely located in the 19th century as a compositional entity,” says Ó Lionáird. “It was everywhere . . . Collectors have written extensively about the fact that the Irish people were a bit odd. They were constantly music making, extempore versifying, dancing. Even in the midst of their dire poverty they were given to creativity in the musical form. All the poetry in the Irish language was sung. It was very unusual. [Then] there’s an era called ‘the Great Silence’. Collectors were collecting feverishl. They had a sense that things were in danger and came into Ireland in force and they notice in that period [the years of the Famine] there’s a measurable trough. The Famine signalled the manifest death of the Irish language as the language spoken by most of the people in Ireland.”

Where did the staging ideas come from? “A number of people in New York when I was working on this told me about the Famine memorial in Battery Park which is a transplanted slice of the west of Ireland,” says Creed. “I went and walked around it with Laurie Anderson. She was at the Cork Midsummer Festival in 2011 [for which Creed was artistic director]. Then I went with Jim Findlay who was the designer of the set and video for this production and we had this idea we would make a slice of landscape, so this found object would sit in the middle of an orchestra on stage. So it’s kind of like a chunk of Achill or Erris. Then Jim and I spent some days tramping around in bogs and the sides of mountains on the Erris Peninsula filming skies and sunsets and storms . . . which are images of the place where Asenath Nicholson walked around during the Famine.”

Creed and Dennehy also went to interview the aforementioned economists, historians and political theorists and Dennehy integrated these interviews into the score. Why were voices like Chomsky’s and Krugman’s important?

“One of the stories we want to tell,” says Creed, “is about the conditions that gave rise to the Famine, which are, in essence, that the industrial revolution caused growing inequality in the British empire, and just a few years before the Irish Famine the British government had adopted free market economics as their guiding principle. So, when the Famine struck, the policy was, ‘Don’t interfere with the market. Don’t subsidise food. Don’t stop exporting grain because you don’t interfere with the market.’ That sounds extremely familiar and for the economists we spoke to that struck a chord.”

Is this blend of sean-nós, new classical music, video, audio, economics, field recordings and politics something new? “In the early 17th century when Monteverdi was starting to make opera, it was also all about contemporary technology,” says Creed. “How do we make gods appear out of the sea? How do we make storms? How do we make these extraordinary baroque theatres that could do a full stage transformation by people just pulling ropes backstage? So what we’re doing is not so different from what opera has always been. Opera is a place where you bring different elements together to make something new.”