Olga Barry’s first programme was scaled down in ambition, but delivered some big moments 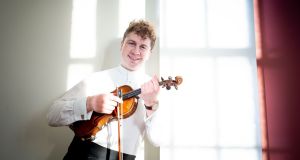 There is no escaping the fact that Kilkenny Arts Festival’s music programme has been taken in a new direction by Olga Barry, whose first festival as artistic director began last Friday.

Barry rose to the top job as an insider. She was festival producer from 2014 to 2018, years during which the then festival director Eugene Downes greatly enriched and expanded the musical offerings.

The headline-garnering appeal of Downes’s classical music programming was its monothematic emphasis. His surveys of Beethoven, Bach, Mozart, Schubert and Brahms were popular successes, though it was not at all easy to see where he might have struck out next and at the same time retained both the single-composer focus and the same breadth of appeal. Picking all the low-lying fruit at the start was always going to guarantee challenges down the line.

It is interesting to see how the achievements of the last five years are recorded in the festival’s financial statements. Downes inherited a surplus of €79,329 and in five years whittled it down to just €1,038. Three of his five festivals saw losses: €39,397 in 2014, €69,162 in 2015 and €72,542 in 2017, the year in which the artistic budget reached its peak of €660,807. That peak coincides with what I’ve calculated to be a significant spike in the use of performers based abroad, some of them Irish, most of them not.

Barry has not had the easiest start to her first festival. She was doubly unfortunate with two of her major bookings

It’s perhaps not surprising then that the ambition and reach of Barry’s first music programme are scaled back, or that the demands of this year’s foreign travel budget cover less than a quarter of the number of performers in the peak year of 2017. There can be no doubt but that Barry and the festival board would both have known what each was buying into when she was appointed.

Barry has not had the easiest start to her first festival. The bad weather created problems, though not for any classical concerts. She was, however, doubly unfortunate with two of her major bookings. The French contralto and conductor Nathalie Stutzmann’s Orfeo 55 ensemble ceased operation last April, and the concert – which will take place tomorrow night – was only rescued by having the same players sign new contracts to perform under a new name, Phoenix 55.

The biggest event of the opening weekend, a piano recital by the Ukrainian-born Australian Alexander Gavrylyuk, winner of the Arthur Rubinstein International Piano Master Competition in 2005, also ran into difficulties. Gavrylyuk had to cancel and, though his place was more than ably taken by Barry Douglas, the first half of Gavryluk’s programme had to be changed; only Mussorgsky’s Pictures at an Exhibition remained from the originally advertised programme.

Downes took very public ownership of the festival. He delivered idiosyncratic introductions from the stage at virtually every concert, codifying his speech to avoid the normal way of saying things – he referred to the priory church of St John rather than St John’s Priory, and so on – and he revelled publicly in the historical minutiae of the venues, and talked up the music and performers, too.

I found it a relief not to to have these stilted introductions repeated concert by concert. Barry has yet to stand in front of the audience at any of the events I attended, though this has also occasioned a shortage of information. There was no announcement, let alone an explanation, for the dropping of Elgar’s Serenade for strings in the opening programme by the Irish Chamber Orchestra, and no mention of Douglas replacing Gavrylyuk for anyone unfortunate enough not to have heard of the change before arriving at the concert.

Douglas, of course, would probably have been a much bigger draw than the highly regarded but much less well-known Gavrylyuk. After all, back in 1986 Douglas became the first Western pianist to win the International Tchaikovsky Piano Competition outright since Van Cliburn in 1958.

That not only sealed his international reputation, but also marked him out as a player with a special relationship to Russian music. His handling of Pictures at an Exhibition at St Canice’s Cathedral on Saturday was individual and fearless: individual without descending into quirkiness, and fearless in a way that always kept the pictorialism of the music in contact with sound musical judgement.

He began with what you could call a virtuosically measured account of Beethoven’s Appasionata Sonata, and also played the entire set of Rachmaninov’s Op 16 Moments musicaux with characteristic understanding.

Sunday afternoon brought the festival debut of Kilkenny violinist Patrick Rafter. At St John’s Priory he shared the programme with pianist Michael McHale – they each played solos as well as joining forces for sonatas by Debussy and Franck.

Rafter is one of those players whose far-sighted musical vision more than makes amends for his occasional flaws of intonation or rhythm. McHale was a wonderful partner in the Debussy and Franck, and his two Debussy solos and Rafter’s effortlessly linear account of Ysaÿe’s Third Solo Violin Sonata kept up the high standard.

The Irish Chamber Orchestra, directed by Katherine Hunka, was in mixed form in Friday’s opening concert at the Black Abbey. The players showed runaway virtuosity in Britten’s Frank Bridge Variations and Elgar’s Introduction and Allegro, but found the right expressive mode in David Fennessy’s Hirta Rounds, a force-of-nature response, birds and all, to a visit to the island of Hirta off the Scottish coast.

Mezzo-soprano Sharon Carty’s beautifully centred singing in Arvo Pärt’s Es sang vor langen Jahren was the high point of Musici Ireland’s all-Pärt programme at the Black Abbey on Saturday. None of the other performances managed to balance musical surface and content with anything like the same success.