All Together Now: The fest and the furious 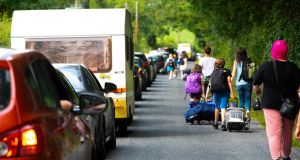 Festival-goers walking to All Together Now at Curraghmore, Co Waterford. There were hours of traffic delay getting to the venue. Photograph: Patrick Browne

Before the music began at Waterford’s All Together Now over the August Bank Holiday weekend, complaints about traffic delays filtered through social media, with some attendees reporting delays of up to nine hours. But the problems didn’t stop there.

While the line-up and atmosphere were praised by gig-goers, the breakdown in communication from festival organisers around traffic, overcrowding in the campsites and poor waste management were the main talking points following the festival.

In addition, heavy rain forced the Belonging Bandstand to close temporarily on Saturday and Sunday afternoon as it was “unsafe” for performers.

Many attendees were disappointed with the number of bins across the site. One Twitter user posted a video of waste from black bins and greens bins in the campsite being emptied into the same truck.

There were also reports of overcrowding in the This Must Be the Place campsite, with campers claiming that stewards failed to mention that there was an overflow campsite called Both Sides Now.

In its second year, with ticket prices from €180, the POD-run festival in Curraghmore Estate increased its capacity from 15,000 to 22,500, and many attendees feel like the organisers failed to manage this shift in numbers, which was evident with the gridlock on Friday afternoon.

The general feeling among gig-goers interviewed by The Irish Times is that the organisers increased the capacity without solving the teething problems that they experienced around traffic, communication and waste last year.

A tweet from Aideen Blackwood reads: “I had a fun time at ATN but its main problems can be summed up by saying it Electric Picniced itself without thinking of the consequences that would have on its primary audience of people who are looking for something that isn’t Electric Picnic”.

“The traffic that lots of people experienced on Friday was too long. People expect traffic in some shape or form travelling to concerts and festivals, but what happened Friday was out of the ordinary,” he says in a statement.

With a lack of communication from festival organisers, people were relying on updates from Twitter users to plan their journey. One tweeter likened “the waiting, the uncertainty and the unknown” of the traffic to what a hard Brexit might be like on Border counties.

When asked why they didn’t alert people about the traffic delays through push notifications on the official festival app, Jenny Headen, the festival’s public relations officer, admits that they should have done just that.

“We hold our hands up and say that on the Friday of the festival we were caught between a rock and a hard place. We wanted to communicate with people already at the festival with what was happening – but we should also have addressed the people spending so long en route to the site,” says Headen.

“Over the course of the weekend we focused on responding to onsite queries, scheduling changes and informing people of the different offerings the festival had.”

Rolfe adds that the app proved vital across the weekend.

“It’s the first time the festival has had an app and the feedback was extremely positive, with over 95 per cent of the audience downloading it and the majority actively using it. It proved vital in keeping people informed on scheduling changes.”

In relation to the closure of the Belonging Bandstand, Rolfe says that all cancelled acts were rescheduled, and this was announced via the app and social media.

“The majority of the ... performances which were affected were accommodated on other stages at short notice, which included Jurassic 5’s Soup, Galway Street Club and King Lagoon’s Flying Swordfish Dance Band.

“The bands which weren’t able to perform on the bandstand did get to on other days of the festival, including Booka Brass, Maroon Town and London Astrobeat Orchestra, so there wasn’t one band on the bandstand line up that didn’t perform at the festival across the weekend at some point.”

He added that Icelandic composer Ólafur Arnalds “personally informed the awaiting audience of the delay over the PA” when he faced a 15-minute delay due to water leaking into the Something Kind of Wonderful tent. This problem was solved by erecting a gazebo over a portion of the stage, and any further acts delayed on that stage were announced through the app and social media.

In relation to the reports of overcrowding in the This Must Be the Place campsite, aerial photographs on the festival’s social media show that there was more camping space available in Both Sides Now.

“We work hard to brief all of the teams working at the festival. It is a big site and sometimes people working there are not as familiar with the layout and facilities as they should be,” says head of security Diane Vesey. “We take the feedback on board regarding teams communicating to festival-goers and will work to improve it next year.”

Festival-goer David Atkinson, who attended last year’s festival, says that the walk from the blue car park to the This Must Be the Place campsite was much longer, with no one really knowing where they were going.

“Whose idea was it to make everyone walk uphill with all their drink, tents and food from the car park? It felt a little like we were in a budget edition of Ireland’s Fittest Family.”

While the festival app had a detailed map, phone batteries run low at festivals so the lack of clear signage across the festival site added to the frustration. Paula Lyne says it was impossible to find water refill stations on site. “They had signs up everywhere telling people to stay hydrated but it was pretty tricky to find any water refill areas.”

Headen explains that while it was difficult to maintain full service all weekend, people were generally tidying up after themselves.

“Waste management from the All Together Now community was extremely good this year. Bin signage and messaging was being followed, which meant compost and recycling bins in the Main Arena required regular servicing,” she says. “There were times when this wasn’t possible, but as soon as it was possible to we dealt with it immediately.”

Many Irish music festival-goers want to move away from the big, commercial-style festival but they still want to see big-name acts. All Together Now felt like the solution to that – and it still could be – but in the case of this year’s event bigger does not mean better, and the organisers need to win back the trust of their audience before expanding again.

As of Tuesday night a large number of the POD team were still on site in Curraghmore, and Headen says that they are going through every comment on Facebook, Instagram and Twitter so that they can fix what went wrong.

“We reassure you that we are listening and we are taking on the feedback so that can work to improve it next year.”