Leonard Cohen and me: How a Jewish Buddhist and an agnostic became creative partners

I wanted to create a new ‘requiem Mass’. Leonard’s words and music were perfect 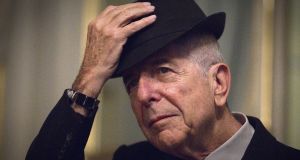 Canadian singer and poet Leonard Cohen: Leonard’s music and words were ideal for these subjects – his work is littered with religious and spiritual imagery; with hope and sanguinity, and yet it’s also strewn with doubt, human weakness and uncertainty. Photograph: Joel Saget/AFP/Getty Images

Word came on a morning in early May 2016. The third such morning in two years. A young man had died, another sudden, tragic death. A week later, once my own anger and frustration had lessened, a thought crossed my mind. In the wake of these deaths, not only had life changed irrevocably for the families of the young men, but the familiar pattern of confusion, anger, pain and fear would lie ahead until some light got through.

The procession of young deaths, and the heroic efforts of those left behind, set me thinking about how to respond and, eventually, about the possibility of creating a work for stage that would reflect the bewilderment and anguish felt by family and friends. A requiem seemed the obvious answer, a requiem Mass. But where and how to start?

Around that time, too, I had a conversation with a friend who had recently resigned from the priesthood. He spoke of the previous three years: of the weddings, christenings and funerals at which he’d officiated; the sick calls in the small hours; the last rites whispered on roadsides; the words of attempted consolation to families who needed to hear something that might make some sense of the senseless. All of this while living in the darkness of a complete loss of faith. This coincidence seemed more than happenstance. The weariness and exhaustion of this man needed to be recognised, and the falling together of the two events drew an even clearer picture of where the stories might lead.

By now, it was late May 2016. I emailed Leonard Cohen, a friend of 30 years, and asked whether, together, we might create such a work. The reply came within an hour: I’m a Jewish Buddhist, you’re an agnostic Quaker, where do we begin?

Over the following weeks, I outlined my idea in greater detail: a requiem for stage, shaped on the liturgy of the Mass but using only Leonard’s words and music to create that liturgy. I had spent days and nights listening and re-listening to his songs and reading through his poetry collections – in particular, Book of Mercy. I sent him an outline of what I had in mind and, over the following months, the emails came and went with suggestions and recommendations. Leonard sent me a poem I hadn’t seen before. The text began to take shape, as did the central roles of the mother and father of the dead child and the celebrant who, in spite of his loss of faith, must celebrate this final, heartbreakingly important Mass.

It seemed to me that Leonard’s music and words were ideal for these subjects: his work is littered with religious and spiritual imagery; with hope and sanguinity, and yet it’s also strewn with doubt, human weakness and uncertainty.

By mid-October 2016, the work was complete. On October 23rd an email arrived from Leonard: Anything of mine you wish to use, feel free to use it. I knew Leonard was ill but not how ill. That solitary one-liner didn’t raise any questions; I read it as an encouragement. From time to time one-liners would arrive. On my 60th birthday the message had said simply: I warned you this would happen.

One morning, two weeks later, my wife, Angela, woke me before six. “Leonard is gone,” she said. She had heard the news on the radio. I turned on my phone. Already there were texts from my friends Joe Taylor and Rob Canning.

Suddenly, the importance of staging the requiem took on a new urgency. What had been a requiem by Leonard became also, in an unexpected way, a requiem for Leonard.

I talked to my long-time friend and collaborator, Aisling Carter, about the requiem. We discussed the musical requirements; the size and composition of the band. She began work on the musical arrangements. Early in 2017 we booked a number of theatres. I approached the theatre manager in VISUAL, Carlow, and, again, there was an enthusiasm about premiering the requiem there in June of that year.

Drawing together a group of musicians and singers to perform the requiem proved easier than I had imagined. I wanted a team from the immediate area and, with the help of Mary Amond O’Brien and Majella Swan, directors of music schools in Carlow, and with recommendations from Aisling Carter, we assembled a cast: three lead singers, two cellists, a violinist, a percussion player and a pianist, all under Aisling’s musical direction. The addition of two actors completed the onstage crew and rehearsals began that spring. Meanwhile, lighting technician Tom Kennedy set about designing a lighting plan that would create the onstage atmosphere for the requiem.

The stage set was simplicity itself: a rough kitchen table (made by our drummer, David Day, from old boards and the remnants of a timber ladder) was reflective of the table at which the couple sit in their suddenly silent house and of the altar table at which the requiem Mass will be sung. A kitchen chair on each side, some flowers, a teapot, two cups (one of which doubles as a chalice), a book and a bunch of wild flowers complete the table setting. The starkness of the story, the beauty of the music and the power of the singing tell the rest.

The closing of the requiem was the most challenging part: how to leave the audience with a sense of the depth of the suffering endured by families, while, at the same time, lifting the spirit to a sense of hope, a reminder that life continues – radically altered but even more important now – for those who remain. In the end we settled on one of Leonard’s lesser-known songs, You Got Me Singing. The lyrics seemed particularly apposite: “You got me singing even though the world is gone,/ you got me thinking I’d like to carry on./You got me singing even though it all looks grim,/ you got me singing the Hallelujah hymn.” (We had purposely avoided using Hallelujah in the Mass, as Leonard said: “There ought to be a 10-year moratorium on that song.”)

On June 15th 2016, Between Your Love and Mine was premiered at VISUAL, Carlow. President Michael D Higgins, a long-time Leonard Cohen admirer, attended, as did the Canadian ambassador, Kevin Michael Vickers. The morning after the premiere, a call came from Áras an Uachtaráin, inviting us to stage the requiem there on Culture Night 2016, which we gladly did.

The sadness, love, hurt, compassion, uncertainty and redemptive power of Leonard’s words and music struck a communal chord with audiences across the country. And then the short tour ended, but the work remained.

Late last year, I contacted Leonard’s family and his manager, Robert Kory, and suggested a restaging of the work on Leonard’s 85th birthday, September 21st, 2019. It seemed an appropriate celebration of the occasion and the man. They agreed and the National Concert Hall was booked. The Dublin performance will be one of six across the country.

In revisiting the script, I added a short prelude, drawing further on Leonard’s work, amplifying the sense of agnosticism in the character of the celebrant and “the panic of loss” in the figures of the bereaved parents. In doing that, I became conscious of the shadows of my own parents in the wings – they lost four children to stillbirth, and, given the mores of the time, the babies were buried at the bottom of our garden, the gates of Christian cemeteries being closed to unbaptised children.

To my delight, all of the original cast and crew are available for the NCH staging and the other five performances, and we have added three further singers, deepening the sense of community in the requiem. Artist Siobhán Jordan has created a tapestry for the lectern used on stage, based on a design by Leonard.

But, most of all, this work is about three things: reflecting on the loss of parents whose children have accidentally or intentionally stepped out of this life; facing the loss of faith many people experience, even those tasked with supporting communities who, in a time of crisis, seek the succour of belief; and, now, remembering the man who created this beautiful music and these beautiful words and whose generosity made the requiem possible.