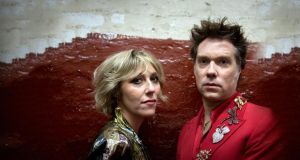 Rufus Wainwright: ‘This tenth anniversary monument is, in many ways, a testimony to my mother and her love of the holiday season.’

Rufus Wainwright has many memories of his family’s Christmas concerts from down through the years, but one stands out for obvious reasons. “I’ll never forget singing ‘Blue Christmas’ with Lou Reed at Carnegie Hall years ago – because of how wonderful it was, but also how frightening,” he laughs.

“He was always ready to turn on a dime, whether it was in the rehearsal or on the stage, but we got through it; me, him and Anohni.”

The family tradition has been inherited and wholeheartedly embraced by the next generation. As youngsters, Rufus and his sister Martha participated in the McGarrigle family’s festive concerts, but since the death of their mother, folk icon Kate McGarrigle in early 2010, they have acquired a deeper meaning.

Their ‘A Not So Silent Night’ concerts, which have taken place in various cities across the past decade, now raise money for cancer research in their mum’s name.

“It was really my mother’s baby for a long time,” he explains. “She would nag about doing a Christmas show in the middle of August, and drive us all nuts with her propositions – but we would always acquiesce.

“And once she got sick, it became much more of a vehicle for both hope and solace – but also for raising money for cancer research. So we all really embraced it fully, then. This tenth anniversary monument is, in many ways, a testimony to my mother and her love of the holiday season.”

This year, the Wainwrights are bringing their travelling musical circus to Dublin for the first time.

“I’ve played Dublin all my life, really,” he says. “Especially considering I used to go there as a kid with my mom, occasionally, and sing with the McGarrigle Sisters. And of late, I’ve developed a real empathetic relationship with the National Concert Hall; there’s something about that room that really speaks to me. So we’re going to the source, in a sense, of at least one of the branches of the Wainwright/McGarrigle situation.”

This year also marks the 10th anniversary of Kate’s last concert. She died of clear-cell sarcoma just weeks after her final gig – a Christmas concert with family at London’s Royal Albert Hall. Rufus says that he’s unsure whether that milestone anniversary will make this year’s shows more difficult.

“Oh, well, we’ll see,” he murmurs. “Another thing about Dublin is that there’s a high frequency of emotional power in that city. And so I wouldn’t be surprised if she visits us periodically throughout the evening. So we’ll see.”

Martha, meanwhile, says that the Christmas shows have aided her grieving process over the years. “It definitely helped,” she agrees.

“Singing Christmas songs together with friends and family is a gift – and it reminds us, as well, of the continuation of life and the natural cycle of the seasons, and these are concepts that can help in grieving.

“Rufus and I still cry from time to time because we miss our mum and wish she were here to enjoy the grandkids and help out, but the Christmas show is a way to conjure her and have her back with us, if only in an ethereal way.”

She cites previous concerts featuring Carrie Fisher and Renee Fleming as personal highlights, but has particularly fond memories of that aforementioned final London concert with her mother, which saw Kate debut the poignant Proserpina – a song based on the Greek myth of Persephone that tied into her own personal situation.

One of the add-on ticket packages available to fans attending the Dublin gigs allows them to come on stage and join in the chorus of the song. The song was also the launchpad for a new brand of the Kate McGarrigle Foundation which launches this Christmas and will provide musical therapy for artists with cancer. Half of all money raised by the foundation will continue to go to research.

“The process of writing Proserpina was extremely moving and important to her, as well as those around her,” Martha explains. “Her existence as an artist and musician in the face of her illness and death was crucial to her experience of it. Music and being able to write, produce, and share her song with the public was very important to her.

“Music and art can help us to make sense and live through very difficult times. I hope that the money we raise, and get into the hands of artists to create a song, will help them in their difficult journey through cancer.”

The importance of family, she says, is brought into stark contrast with these gigs each year. “Since we’ve been making music – even as children – Rufus and I have been connected through singing together,” she agrees. “It is our field and singing, organising, rehearsing and experiencing these Christmas shows has become a big part of our relationship.”

Now that both she and Rufus are parents themselves, they both say they are looking forward to potentially passing on the baton to the next generation. Rufus’s 8-year-old daughter Viva, whose mother is Lorca (daughter of Leonard) Cohen, certainly has music in her blood.

“She’s very musical,” he confirms. “As my aunt Anna said, ‘That girl can sing anything’. She has an amazing voice, so we’ll see what she wants to do. She won’t be coming to Ireland, because it’s a little far; we’re based in LA. But this Irish show is a chance for me and my sister to catch up, and well . . . we are now the old people, us and our cousins,” he laughs. “We’ll see if some aunts come or not, but it’s really about this generation and of course, there’ll be a lot of guests from Dublin [Paul Brady, Conor O’Brien, Lisa O’Neill and Loah] to come up and join us, as well.”

Once Christmas is over, both he and Martha will return to their own material. Martha says that her time and energy have been depleted by “kids and a new art space/venue called Ursa in Montreal that I’ve opened”, but that “songs are coming” and she hopes to have new material out by the summer.

Rufus, meanwhile, releases his eighth studio album in April, having spent the last five years working on his second opera Hadrian and various other non-pop pursuits.

The new material, he says, harkens back to his early work. “It’s kind of a return to my early stuff – in terms of when I was living in LA and working in these incredible studios with these great sessions players,” he says. “Now that I’ve been in LA for a couple of years, to be with our daughter, I wanted to make a record that reflected my early career, as a kind of bookend to this period of my life. In the future I’d like to go out on a few more tangents – whether it’s opera, or French records, or Judy Garland; I still love going on these trips.

“But I felt it was important for this record, to return to the source and make something pretty solid and something that my fans will really appreciate. So it’s a real ‘songwriter’ record.”

He would like to write another opera at some point, he says, and a “really wacky French record that’s totally different from anything I’ve ever done”. And there is always the hope that this new album will finally bring him the recognition he deserves on a wider scale.

“In terms of this tier of great singer-songwriters we all admire so much, like Randy Newman or Tom Petty, or Bruce Springsteen; I mean, I’m not saying that I am them,” he says.

“But nonetheless, there’s a new generation of statesmen graduating into that realm, and I think I deserve a little space there. So we’ll see. Basically, I want a Grammy,” he decides suddenly, only half-joking. “Okay, I’m sorry – I want a Grammy at some point!”

For now, he will settle for making a success of these Christmas concerts.

“There were years when I was more reserved about the whole concept,” he laughs. “But I am now amazed at how fantastic Christmas music is. I mean, there are certain guests we ask and they’re like ‘Oh, I hate Christmas music’ and we kind of let it go.

“And there are others that really get into it. But the more I do it, the more I’m kind of just blown away by the amount of Christmas music there is, how much of it is really good . . . and other songs that you can incorporate with that same spirit. So I’m pro-Christmas, believe it or not.”