Eight great jazz gigs to go to this week 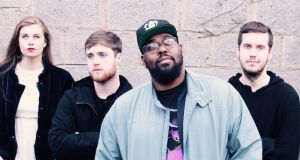 Zandra, Queen of Jazz
Smock Alley, Dublin, darnskippy.com (also DLR Lexicon, Dun Laoghaire, December 6th, 7th)
Josephine Alexandra Mitchell – known as Zandra to her fans – was Ireland’s first jazz musician of international repute. Born in Dublin in 1903, she gave her first public performance at the age of 11, and by her early 20s, was touring Europe, eventually settling in Berlin where she led her own band, Baby Mitchell and her Original Queens of Jazz, to great acclaim during the 1930s. When she died in obscurity in Donegal 50 years later, all but forgotten by Irish jazz fans, her few personal effects included a mouthpiece given to her by the great Coleman Hawkins. Zandra, Queen of Jazz, described as “a play with original music”, is a new work from Darn Skippy theatre company celebrating Ireland’s first international jazz star, written and performed by Roseanne Lynch, with music by Richard Lennon. November 23rd is the last chance to catch their run at Smock Alley before the production moves to the Lexicon in Dún Laoghaire for two shows in December.

JazzGate: The Music of Carla Bley
Black Gate, Francis Street, Galway, aengushackett.com/jazzgate
In the tragically masculine world of jazz in the 20th century, composer and pianist Carla Bley was one of the few outliers, a fiercely independent and iconoclastic voice who followed her own muse and won the admiration of her peers for her highly original compositions, many of which have become jazz standards. Japanese-born, Dublin-based pianist Izumi Kimura, herself one of the outliers in Irish jazz, is the special guest for this latest edition of guitarist Aengus Hackett’s JazzGate series with respected Galway saxophonist Matthew Berrill completing a pared-back chamber trio exploring Bley’s quirky sound world.

Richard Nelson Sextet
Arthur’s, Thomas Street, Dublin, arthurspub.ie
It may be the rarest of instruments in jazz, but Irish musician Richard Nelson has form in bringing the gorgeous twang of the pedal steel guitar into a jazz context. Born in Singapore and raised in the glens of Antrim, Nelson has been the go-to pedal steel guy in Irish country music for decades, and has been particularly associated with singer Daniel O’Donnell, but he has also released two excellent jazz records under his own name. His current sextet includes saxophonist Ciarán Wilde, pianist Myles Drennan, guitarist Lee Meehan, bassist Dave Fleming and drummer John Philip Murray.

Sheryl Bailey & Peter Moc Group
Arthur’s, Dublin, arthurspub.ie
Czech-born guitarist Peter Moc first presented his tribute to the music of guitarist Emily Remler in 2015 in collaboration with the great fusion guitarist Larry Coryell. Since Coryell’s death in 2017, the annual event has become a dual celebration, with high-profile guests joining Moc’s group to remember both Remler and Coryell, including guitarist Nir Felder and saxophonist Grace Kelly. This year, Moc has invited respected US guitarist and pedagogue Sheryl Bailey, who holds the prestigious assistant chair at the guitar department at Berklee College of Music in Boston, to join a group that also includes violinist Klara Janu, bassist Andrew Csibi and drummer Kevin Brady

Plaza Real play the music of Weather Report
Arthur’s, Thomas Steet, Dublin, arthurspub.ie
Bassist Barry Donohue’s father gave him a copy of Weather Report’s masterpiece Heavy Weather when he was thirteen and thus another young life was diverted from the path of ordinary music. Now one of the most respected young jazz musicians on the Dublin scene, Donohue may not be the only bassist to be captivated by the sound of the great Jaco Patorious, or the era-defining music of Joe Zawinul and Wayne Shorter, but his talent-rich Plaza Real band – with saxophonist Chris Engel, keyboardist Darragh O’Kelly and drummer Shane O’Donovan – is one of the gutsiest and most authentic homages to Weather Report you’re ever likely to hear on a Dublin stage.