Rosetta Cucchi, who brings an open-hearted warmth to her task, has chosen ‘Shakespeare’ for 2020 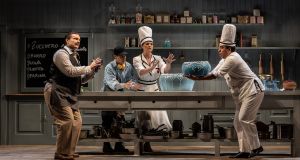 Wexford Festival Opera’s new artistic director, Rosetta Cucchi, took to the stage herself at the Jerome Hynes Theatre one morning during the festival. She announced her programme for next year and unveiled a range of changes and innovations she has planned.   Her first innovation, of course, was to present herself and her ideas to a hundred or so people and to make an open invitation for questions or queries. David Agler’s long term as artistic director – his first festival was in the old Theatre Royal in 2005 – was marked by a media-shy, clammed-up uncommunicativeness when it came to his artistic choices and thought. His repertoire choices revealed just one big theme – new and newish operas in English, with a strong bias towards American or US-based composers.   Cucchi’s plan is to have a theme for every festival. Next year, when the festival will run from Tuesday, October 20th, to Sunday, November 1st, the theme is Shakespeare.   The festival will open with Hungarian composer Karl Goldmark’s last stage work Ein Wintermärchen (A Winter’s Tale), a 1908 opera based on A Winter’s Tale. Goldmark’s first and best-known opera, Die Königin von Saba (The Queen of Sheba) was staged at Wexford in 1999.  French composer Ambroise Thomas featured in 1986 (Mignon) and 2011 (La Cour de Célimène). Cucchi’s choice of his 1850 Le Songe d’une nuit d’été (A Midsummer Night’s Dream) is not actually what you might expect. It’s not a setting of Shakespeare but an opera in which Shakespeare appears as a character, as does one his greatest creations, Falstaff.  Alfredo Catalani aria Ebben? . . . ne andrò lontana became a cult hit after its use in Jean-Jacques Beineix’s 1981 film, Diva. Wexford produced the opera it comes from – La Wally – in 1985. And Cucchi’s third 2020 choice is the composer’s Edmea of 1886, included not because it’s based on Shakespeare or about Shakespeare, but because she finds it so Shakespearean.

The day-time ShortWorks productions are being rebranded as Pocket Operas/Opera Beag, one of which will be a version of Verdi’s Falstaff. The Falstaff production will involve the new Wexford Factory, which is to be an “intensive academy” offering “professional and financial support to 15 young Irish or Irish-based singers in the early stages of their careers”.   Cucchi is working with the conservatory of the Technological University Dublin (the former DIT), the Royal Irish Academy of Music, the CIT Cork School of Music, the Bolshoi Theatre in Moscow, The Rossini Opera Festival in her home town, Pesaro, and Opera for Peace. Graduating students of the academy who will have tutoring from, among others, the tenor Juan Diego-Flórez (who appeared in Meyerbeer’s L’étoile du nord in Wexford in 1996) before they take part in Falstaff.   SinfoNua, the National Concert Hall’s orchestra of emerging professional musicians, will play in Falstaff and will be tutored by members of the Wexford Festival Orchestra. The Pocket Opera productions will take place in the National Opera House’s O’Reilly and Jerome Hynes theatres, as well as in the Wexford Arts Centre.  Andrew Synnott is to become the festival’s first-ever artist-in-residence, and will also take charge of the festival’s chorus. Italian conductor Francesco Cilluffo becomes the festival’s first principal guest conductor. He made his Wexford debut in the acclaimed production of Mascagni’s Guglielmo Ratcliffe in 2015, which was subsequently released on the RTÉ lyric fm label. Cilluffo will also make his debut with the RTÉ Concert Orchestra in an all-Russian programme on Wednesday, January 15th.

Cucchi is a networker, the kind of person who is always making or working on deals

There are to be four late-night Cabaret des Artistes shows, a series of pop-up performances around Wexford town (branded W F O 2.0), and a special concert appearance by the American soprano Lisette Oropesa, who sang Gretel to Dundalk mezzo-soprano Tara Erraught’s Hansel in Humperdinck’s Hansel and Gretel at the Metropolitan Opera in New York a few years ago.

Erraught herself is about to star in Irish National Opera’s production of Rossini’s La Cenerentola at the Bord Gáis Energy Theatre (from Sunday) and will also sing the role at the Met next spring.

Cucchi is setting out to be as open as Agler was closed. His repertoire innovations alienated a significant segment of the festival’s audience base and resulted in substantial box office issues over the years. The opening of the National Opera House in 2008 was planned to increase the festival’s capacity by around 50 per cent. Despite repeated attempts, the festival has failed to grow its audience and, by curtailing the number of main opera performances from 18 to 12, seems to have accepted that no short-term turnaround is likely. Cucchi is bringing an open-hearted, Mediterranean warmth to her task. Agler showed no interest in Irish opera productions beyond Wexford. Cucchi is a networker, the kind of person who is always making or working on deals. Her first season fully restores Wexford to its core repertoire values in the realm of neglected opera.

And she clearly wants to broaden the festival’s offering and grow its relationship not only with younger Irish performers and listeners, but also with the non opera-loving public.   She’s hardly likely to take the festival as far away from opera as it used to go. This paper reported on the announcement of the 1965 festival programme: “It was stated that a considerable number of fringe events, such as cycle races, hurling, recitals, beagling and bingo, would be held in connection with the festival.”