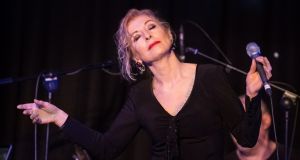 Jonathan Kreisberg Quartet
Arthur’s, 28 Thomas Street, Dublin 8, arthurspub.ie (also Sunday 10th)
New York guitarist Jonathan Kreisberg is one of the rising stars of the US scene, a brilliant melodicist with an ear to the past, an eye on the future, and playing credits that include Dr Lonnie Smith, Lee Konitz and Ari Hoenig. The 47-year-old arrives in Dublin for a two-night run at Arthurs with his own top-flight quartet, including young Cuban-American pianist Martin Bejerano, a member of legendary drummer Roy Haynes’ band, and the senior New York rhythm-section of bassist Matt Clohessy and drummer Colin Stranahan.

John Donegan
Hugh Lane Gallery, Dublin, hughlane.ie
Irish pianist John Donegan is UK-based these days, but his musical heart is still tuned in to his homeland. His album, Siamsa Vol. 1, recorded in France in 2018 and released earlier this year, is a collection of the pianist’s own compositions which blend jazz and Irish traditional flavours, some of which are bound to turn up on the programme for this free lunchtime solo concert in the wonderful acoustic of the Sculpture Gallery at the Hugh Lane gallery.

Sounding Seams II
Irish National Heritage Park, Wexford, irishheritage.ie
Last year, Wexford musician and artist Laura Hyland collaborated with blacksmith Guy Urbin and percussionist Matthew Jacobson on a unique site-specific performance in the Crannóg at the Irish National Heritage Park, exploring the resonances, literal and figurative, of tuned metal. Now she has turned that idea into a permanent installation, a musical sculpture of seven giant chimes, erected on the hill of Carrick overlooking the River Slaney. They’ll be there for visitors to play with all year round, but for their unveiling, Hyland – a fascinating musician and composer whose Clang Sayne group weaves vivid folk with visceral improvisation – is joined by spoken-word artist Peter Murphy and classical percussionist Alex Petcu.

Snarky Puppy
Ulster Hall, Belfast (also Olympia Theatre, Dublin, Tuesday 12th), snarkypuppy.com
Snarky Puppy founder and bassist Michael League told The Irish Times back in 2015 that Ireland was his “favourite place to play in the world, to be honest, and I’m happy to see that printed anywhere”. The funky New York-based collective – a shifting “family” of drummers, guitarists, horn players and keyboardists – have won audiences far beyond the jazz ghetto with their feel-good vibe and deep grooves, and they’re back in their favourite place for dates in Belfast and Dublin this week that are sure to draw the sort of crowds that turn other jazz musicians chartreuse with envy.

Mary Coughlan sings Billie Holiday
Arthur’s, Dublin, arthurspub.ie (also Wednesday 20th)
There can be few singers better suited to conjuring the spirit of Billie Holiday than the great Mary Coughlan. Like Holiday, Coughlan’s art has been forged in the crucible of personal tragedy and the Galway vocalist shares Holiday’s ability to invest a standard song with searingly authentic emotion. Tickets for Coughlan’s two dates at Arthur’s this month flew out the door long ago, so when the much-loved singer takes the Arthur’s stage with a first-rate band including pianist Johnny Taylor, bassist Cormac O’Brien and drummer Dominic Mullen, she will be greeted by an audience that knows exactly how special this tribute to one of the founding mothers of the art of jazz singing is likely to be.

Zrazy
Bewley’s Café, Dublin, bewleyscafetheatre.com
Pioneering pop-jazz duo Zrazy have been blazing their own breezy trail through Irish jazz since their debut album Give It All Up won the 1992 Music Critic’s Award for best new band. Five albums and numerous international tours later, pianist and saxophonist Carole Nelson and vocalist Maria Walsh are still turning out their own unique brand of music, blending jazz, Latin and pop influences with feel-good grooves, thoughtful lyrics and an edge of gender politics.

Christian Scott
Sugar Club, Dublin, thesugarclub.com
Christian Scott aTunde Adjuah, to give the muscular New Orleans trumpeter his full honorific, doesn’t pull his punches, musically or politically. His “stretch music”, though obviously rooted in the sound of Miles Davis’s electric period, seeks to expand the jazz envelope, explicitly addressing issues around race and identity, in his own words “to de-colonialise sound, to challenge previously held misconceptions about some cultures of music, and to codify a new folkloric tradition and begin the work of creating a national set of rhythms”. If the results are, at times, a little on the bombastic side, there is no denying the passion and conviction Scott and his band bring to their live performances.

Honor Heffernan Quartet
Arthur’s, 28 Thomas Street, Dublin, arthurspub.ie
Though fully deserving of her reputation as Ireland’s pre-eminent jazz singer, Dublin vocalist and actor Honor Heffernan has spent recent years exploring the theatrical side of her talent, winning international acclaim for Whistling Girl, her show based on the writings of Dorothy Parker, and guesting with pianist Trevor Knight’s wild-west-inspired Devil’s Spine Band. Fans of Heffernan’s jazz singing will be delighted therefore to see her return to her roots this week with a powerful quartet featuring pianist Phil Ware, bassist Damien Evans and drummer Kevin Brady.

JazzGate: The Music of Joni Mitchell feat Suzanne Savage
Black Gate, Galway, aengushackett.com/jazzgate
Illness, not to mention a deep distrust of the music industry, may have forced her to withdraw from public performance in recent years, but Joni Mitchell’s stature as a songwriter, musician, and innovator, continues to grow. Her particular prestige amongst jazz musicians is due not only to her fruitful collaborations with giants of the music such as Charles Mingus, Jaco Pastorius and Herbie Hancock, but above all to the extraordinary originality and musical complexity of her tunes, which crop up increasingly in the jazz repertoire. Talented Belfast vocalist Suzanne Savage, herself a songwriter of growing assurance, headlines this latest in Galway guitarist Aengus Hackett’s ongoing JazzGate series at the Black Gate, celebrating some of the icons of jazz.