Patrick Rafter: ‘I was too chilled out to be a violin prodigy’

The gifted Kilkenny violinist plays from the heart, but keeps a strong head on his shoulders 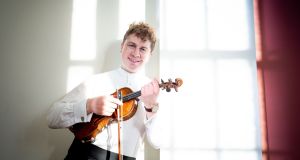 Patrick Rafter: “I thought, if I want to do what Nigel Kennedy does, I need to pull myself together.” Photograph: Tom Honan for The Irish Times

You wouldn’t think it when you hear him play, but the violinist Patrick Rafter is a highly analytical thinker, with a minute grasp of detail. When he plays, the music flows out of him as if by instinct alone, as if his heart and not his head is his guide.

When I ask him about his background– he comes from a musical family in Co Kilkenny – he talks of the individuals and circumstances, his parents, his siblings, with an almost Balzacian level of detail. Every reference leads to further information and assessments: the size of the family (which once performed as The Rafter Family), who is the oldest and youngest, which instruments they played, how well they did it, and what their other strengths in life are.

It must be a family trait. When he talks about his older brother (“not the greatest clarinettist in the world” but “A great thinker, a very smart guy”), he says “the way he analysed a concert I did or somebody else did was quite incredible for somebody who doesn’t have huge musical training”.

His own interest in the violin was sparked by seeing Nigel Kennedy playing Monti’s Csárdás on TV. “He was literally having a geg on stage, as the Northerners would say. He was very happy. People were just smiling. For me it was everything music should be.”

Was he a prodigy? “I don’t think so. I was too chilled out. I had very good facility, so I found things quite easy. I got away with very little practice. Reality struck when I was 14 or 15. I went across to Milan or somewhere on an international masterclass. I was just smacked in the face by the standard, and realised I was five years, maybe 10 years behind. I was gifted with a very natural way of playing, but not in a technically very advanced manner.”

Initially he thought, “Shit. I need to get my act together. If I want to do what Nigel Kennedy does, I need to pull myself together. But then I realised I had a lot of things these technicians hadn’t. I spotted that quite young.”

He was lucky that Vanessa Sweeney responded to his talent in one of the competitions at the Kilkenny Music Festival. She organised a scholarship to study with Eyal Kless at the Royal Irish Academy of Music in Dublin.

“He was the first person who opened a doorway to different ways of violin-playing, the whole idea of sound. This was alien to me. I had some lessons with him from the age of 12.  When he left, I moved on to Fionnuala Hunt, who had been artistic director of the Irish Chamber Orchestra. In hindsight I can see she was an incredible teacher, because she was very committed to me and my endeavours. Anything I needed in terms of encouragement and support she was there with at the drop of a hat.”

A really eye-opening masterclass was with the Russian violinist Sergej Krylov, whose recordings include the Paganini Caprices for Deutsche Grammophon. “I remember there was a girl playing Paganini’s 24th Caprice. It was first thing in the morning, and Sergej hadn’t picked up the violin yet. She was playing, like, perfect. I remember thinking, let’s see what he can do, now! He picked up the violin and made her sound like a mouse, with this vroom sound. Such power! Suddenly you were driving a Bentley rather than a Morris Minor.”

Learning what you need to know from the short exposure afforded by masterclasses is something of an art. At one class, “There was a girl playing, I think it was the Bruch Violin Concerto. She had huge problems with her right hand [the hand that holds the bow]. I was young. I knew very little about bowing, the mechanics of each finger, things like this. But I could see straight away that she had major problems.

“There was a famous professor giving the lesson; I was having one subsequently. He superficially spoke about some things which pointed to the issue. But never said anything to her that had to do with the fact that something was completely wrong.”

The conclusion was obvious. “It’s often what’s not said that you have to really address and really figure out. I recorded the master classes. When you watch them and you’re not involved you can often see things from a far more objective point of view. I looked back and saw there were so many things he didn’t reference purposefully, because they were so evident. He just pointed to them.

“I tried to start thinking about those things. One of them was shifting [the structured way string players move their left hands up and down the fingerboard]. When you to break it down it’s incredibly complex, how the individual movements work. One teacher, Yossi Zivoni, pointed me in that direction and said, ‘This is a whole world you can explore.’

“There’s no right answer. If you watch Maxim Vengerov, or great violinists from the past – Oistrakh, Kreisler, Ida Haendel – they each have their own way of doing it. There’s no right way, no wrong way. You have to do what works for your body. It opened my head, my mind, to the idea that this is a Pandora’s Box. There’s no straightforward way to find your way that works.”

Some of the paths of inquiry that opened up were really fundamental. Such as how you hold the violin. Most violinists have a small chin rest which is kept permanently attached to the instrument, and a much larger shoulder rest clamped to the back, to raise the instrument and make it easier to grip between shoulder and chin. With the chin and shoulder rests in place, the instrument can be firmly held without any hand support.

“I remember Yossi said, take away your shoulder rest. I took it off, and he said, I know it feels terrible now, just bear with me for half an hour. At the end of the lesson I noticed my sound was so much more resonant, because the clamp of the shoulder rest was removed. I went back to my teacher and wanted to know, do I hold the violin or do I not hold the violin? And I’d been playing the violin already for 10 years. Is the violin held from here, or from here? What holds it up?”

He came to realise that “there’s not just one way to the top of the mountain. You have to figure out what works. It’s good that you understand each of them and not turn a blind eye. Try them all. Take the positives and leave the negatives.”

He went with the shoulder rest. Until he met the towering musical figure of Maxim Vengerov. “He didn’t address it in a masterclass, But later he said, ‘I don’t like the way you hold the violin, because your sound is weak and thin. The violin needs to be part of you, to be an extension of you. You hold it. Get your hand stuck into it.’ I was 21.”

You need so many more assets than just your playing

It took a while for him to feel comfortable letting the violin rest on and be moved by his left hand. “After the first month of trial and error, I’ve stuck with it ever since. I completely changed the way I shifted, my vibrato, everything, even my phrasing, as a result. You have to be open to new ideas. I feel a thousand times better for doing it.”

Musical education, of course, is mostly about music rather than managing a professional career and negotiating your way through the world of promoters, managers and agents. At 27 Rafter seems keenly aware of the fact that he’s in the foothills of another mountain he’s going to have to climb.

“You need so many more assets than just your playing.” He talks of “presentation skills, how to relate to an audience, social media, business skills, getting to know people in important positions, networking, your sociability in general, being personable, being able to meet someone and not be afraid to put yourself out there, programming,” most of which are not much addressed in music college.

His appearance in Bach’s Double Violin Concerto with Vengerov and the RTÉ National Symphony Orchestra came about through Vengerov’s suggestion. The idea has all the hallmarks of a great master trying out a protege, putting both their names on the line in a real-life setting. Who knows what success in such a test might lead to?