Drake in Dublin review: In seconds, he goes from zero to wreck-the-gaff

A sportscar spins through the air at the 3Arena (that’s no metaphor, it happened) 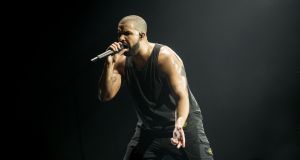 Drake arrives to Dublin too big to fail. While his peer and sometime collaborator Nicki Minaj suffered a tour disaster en route to the 3Arena recently – with what promoter MCD said was the result of some of her production set-up prevented from travelling due to terrible weather – Drake has better luck.

It’s a mild day in the capital, but this is no calm setting. Things are about to get wild.

When he was here in 2017, he was at the helm of one of the greatest pop concert productions of all time, a stunning masterclass that could have been housed at a contemporary art museum as much as an arena.

The Canadian’s cultural force is so dominant that he acts as both a transmitter and vacuum, sucking up influences and disseminating them Drake-ified, in meme-friendly, Spotify-conquering, headphone-dominating glory, languid classic after classic, an artist whose only real competitor in pop colossus terms is Beyoncé.

While the cynical may bash his tropes and magpie-like behaviour, like Madonna before him, Drake doesn’t do pop, he is pop.

He comes to Ireland in the midst of the country’s burgeoning hip-hop boom, at one of the most exciting time for music here in a generation. Rap fans here have always been emphatic in the display of their passion, and now they have homegrown acts to go to when the superstars aren’t in town.

So, what happens next? The UV fringes of Drake’s giant screen-stage-structure glow, as Drake’s tour DJ, the excellent Tiffany Calver feeds the crowd tunes with a heavy dose of Migos and Cardi B to ease them into the madness about to descend.

Drake hadn’t even hit the floor when the crowd-surfing started and stage security was already handing out pints of water.

In seconds, Drake goes from zero to wreck-the-gaff. The first slice of the show is not so much concert as montage, Drake flicking through hits like an addled guest at a house party grabbing the aux cable.

Started From The Bottom announces intention, then a flying sportscar spins around in the atmosphere (not a metaphor, that actually happened), YOLO gets thrown out like loose skins, dancers emerge raucous, the stage becomes a tricolour and Jump Around plays as Drake disappears.

In fairness he reminded us at the start of the show that this isn’t about him, it’s about the crowd. A camera spans the audience and zooms in. This is selfie as spectacle. The lens may focus on Drake, but he taps the Insta story and turns it on to the next one – you.

The overall tone is frenetic and so energy-focused, cohesion falls by the wayside. It’s almost as if he’s representing a generation for whom distraction is a default. “I don’t mean to be a repetitive person,” he says, “but every time I’ve come here there’s been a new level of energy.” And then he takes a shot.

Drake lauds Dublin throughout, and the crowd is immense, a coral reef of hyped up generosity and brilliance.

By the time Hotline Bling comes around – and is cut short – the screen descends into a digital swimming pool, and one wonders what Drake could do live if he stopped trying to entertain for a second. The foundations of the show are about crowd-pleasing, but what about the artist?

Wait, then it switches up again. A laser light show cuts out a basketball court, a net emerges, a competition transpires, and then we’re off again. The latter part of the show settles, and as the tunes and truly epic visuals conspire, the crowd and artist merge, as if on a timeline.

And Drake has thought of that too. Our sentiments become visualised when the screen turns into an iPhone. Post-post-modern in full effect.

This is Drake at his finest, tuned in to the attention economy. But he should also know that it doesn’t need to be about anyone else. He is more than enough, Yet how rare to have an artist so low in ego at his level.

Next time, he should own it, not share it.