Wedding singer to represent Ireland at Eurovision in Tel Aviv

RTÉ producer says Sarah McTernan, who appeared on The Voice of Ireland, has ‘star quality’ 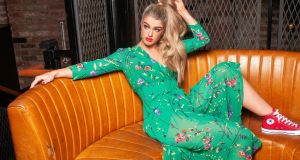 Singer-songwriter Sarah McTernan has been chosen to represent Ireland in the Eurovision Song Contest, which takes place in Tel Aviv, Israel in May. Photograph: Lili Forberg

Singer-songwriter Sarah McTernan has been chosen to represent Ireland in the Eurovision Song Contest, which takes place in Tel Aviv, Israel in May.

McTernan (24) will perform 22, which was co-written by Dutch songwriters Janieck, Roulsen and Marcia "Misha" Sondeijker.

A Co Clare native, McTernan is best known for coming third in the TV series The Voice of Ireland in 2015. Since then she has worked as a make-up artist in Limerick, given birth to a daughter, Mia, two and a half years ago, and formed a wedding band, The Jeds. She unsuccessfully competed to represent San Marino in last year’s Eurovision.

McTernan told RTÉ that a psychic had predicted years ago that she would appear on a big television show, have a daughter and a spike in her career when she was 24. All three have now come to pass.

She and two Swedish songwriters submitted one of the 430 entries to represent Ireland in this year’s competition.

The producers liked her voice, but not her song, and they liked the song 22 but not the singer. When they discovered McTernan was Irish, they decided to pair her with the song.

“After I got the call, I was dancing around the place. I was so excited. As a singer, of course you want to represent your country,” McTernan said.

RTÉ’s Eurovision producer Michael Kealy said there was “no question she has got star quality” and a “very distinctive voice”.

“When you listen to 430 voices, trust me, you know a memorable voice. We asked her to audition to sing the song. We were blown away a bit,” he said. “Outside the wedding circuit in Ennis and Clare where she lives, most people wouldn’t be familiar with her. We brought her in for camera tests. She is a very confident performer.”

The host of this year’s Eurovision - decided when Israel won last year’s contest - has been a source of criticism. Palestinian human-rights campaigners intend to stage a protest outside RTÉ on Friday and a petition calling for a boycott of the competition has gathered more than 21,000 signatures. Protesters say the song contest will be used by Israel as a propaganda tool to whitewash their treatment of the Palestinians and will feature illegal Israeli settlements in the Occupied Territories.

Mr Kealy said all 41 countries will participate in the Eurovision. “We are a public-service broadcaster. We are not in the business of taking political stands against countries. We are going over to take part in a song contest. It never occurred to us to back out,” he said.

“People are perfectly entitled to have a view on this and to protest against it, but it is misguided. This is a song contest. We are not there to make statements or to solve the Middle Eastern conflict.”

A spokesman for the Israeli embassy said the protesters wished to “promote a cynical, politicised hate campaign against the world’s only Jewish state”.

“Their motives are rooted in support for Palestinian terrorism in Gaza, and are part of the effort to delegitimise Israel as a state and disassociate the Jewish people from their history, heritage and birthplace.”