In advance of St Patrick’s Day, we celebrate some of Ireland’s leading creative lights 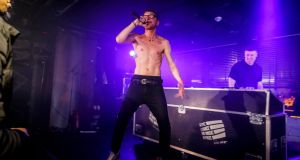 All week, in celebration of St Patrick’s Day, our writers and correspondents are bringing you the best of Irish talent in the arts and other fields. Today, Una Mullally looks at 10 great Irish talents in music.

Beyond the label’s breakout act and co-founder, Kojaque, Soft Boy has constructed an ecosystem out of necessity and ended up as one of the most exciting thing in Irish music right now. What the label lacks in a demographic diversity of artists (the roster is overwhelmingly young, male and white) it makes up for in quality tunes, sophisticated music videos, on point design, and great merch. 2019 is definitely Soft Boy season.

Queer women are often the canaries in the mine of music fandom, cottoning on to interesting acts before they break. That’s certainly the case with Pillow Queens, who have developed a dedicated bunch of followers in thrall to their fuzzy guitar pop melodies, chilled-out stage charm, and delightful music videos.

With some of the best Irish DJs playing right now including Cáit and Saoirse, it makes sense that one of the most intriguing electronic music collectives has a feminist and LGBTQ+ slant. Frequently appearing at Electric in Galway, and with the excellent ELLLL at its core, GC provides not just a platform but a real sense of excitement and difference.

Every now and then a band comes along and makes what seems so conventional exciting again. Fontaines D.C. are that band, with a thundering, energetic, spiky collection of wonderful tracks and live bombast to boot.

Local heroes of the Dublin scene, MxM’s debut album Casual Work is one of the most anticipated Irish releases of the year. Emanating humour, heart and humanity, they have a city willing them on.

All uncharted waters need a decent navigator, and District Magazine has emerged as the capital’s captain. Like many entities on this list, the central component of District is community, be that championing local acts, putting on parties to showcase emerging talent, or hosting conversations online and off. Their all-encompassing analogue, real-life, and digital approach places them at the centre of contemporary Irish cultural discourse.

It’s as much about the talent that orbits this production collective as it is about those in charge. With Jafaris and Soulé as part of their constellation, Diffusion as a hub has the potential to both mould and platform the stunning and relentless amount of hiphop, rap and RnB emerging from Ireland. There are too many acts to mention that could be on this list, but suffice to say this scene is on fire, and Diffusion is part of that.

With nightclubs falling victim to late-stage gentrification, and woeful licensing laws not for budging, the hardy and smart have to be nimble. Come autumn, Hidden Agenda will surely shift some of their bookings to Bodytonic’s big move to Swords at Jam Park, but it’s the creation of their grown-up audiophile bar The Big Romance that has really hit the mark, proving that what people really want is a chilled out place to hang out, with good people, great music, and a sense of community.

The latest breakout star of Irish electronic music, Dec Lennon’s ability to create smooth and fun dancefloor monsters is intoxicating. When he’s not on the road, Lennon spends a chunk of time in New York, but isn’t immune to bringing the party back to his hometown, as his upcoming residency at Wigwam in Dublin in April demonstrates.

The wild card on the list is an unpredictable and brilliant occasional party where music and spoken word acts traverse genre and intention, but there’s always a vibe, one which welcomes all kinds of punters. Subversive, surprising and driven by the Fried Plantains Collective, Black Jam’s sporadic brilliance has a tendency to grab your attention in ways you never expected.

Where do love and hope ultimately come from?
6