Celine Byrne is Madama Butterfly: the best classical and opera shows this week 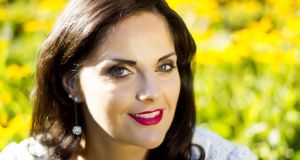 The Orchestra of the Age of Enlightenment keeps good company on its visits to Dublin. These period-instruments players have appeared with mezzo-soprano Cecilia Bartoli, and twice with Simon Rattle. They’re back now with a 19th-century programme with pianist András Schiff playing and directing. It’s an unusually structured evening, with what would normally be regarded as a closing work – Schumann’s Fourth Symphony – in the middle. Before that is Schumann’s notoriously challenging Konzertstück for four horns and orchestra, played on replicas of 19th-century valve horns. And Schiff will direct the final work, Brahms’s First Piano Concerto, from the keyboard. He’ll be playing his own 1867 Blüthner piano, which has been restored by Edwin Beunk.

Ireland’s most popular soprano, Celine Byrne, makes her Irish National Opera debut in the title role of Puccini’s Madama Butterfly. The cast includes Julian Hubbard as Pinkerton, Brett Polegato as Sharpless, and Doreen Curran as Suzuki. The new production, which will also travel to Cork for two performances at the Cork Opera House, is the company’s first Puccini opera. It’s directed by Ben Barnes, with sets by Todd Rosenthal and costumes by Joan O’Clery. Timothy Redmond conducts the Irish National Opera Chorus and the RTÉ Concert Orchestra.

Maxim Vengerov is one of the ever-expanding list of leading instrumentalists to have turned his hand to conducting. He’s appeared in both roles with the RTÉ National Symphony Orchestra in recent years, and is back now for a concert that ups the degree of his partnership with Irish players. He’s playing Bach’s Double Violin Concerto with Kilkenny violinist Patrick Rafter, who he has been mentoring, and the Concerto for violin and oboe with the orchestra’s principal oboist, Matthew Manning. Vengerov abandons the fiddle for the second half, in which he will conduct Dvorak’s New World Symphony.