Picture This win Song of the Year for One Drink 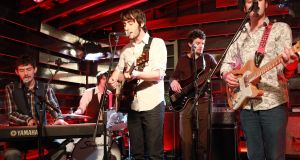 O Emperor: winners of the 2018 Irish album of the year

Waterford band O Emperor have won this year’s RTÉ Choice Music Prize Irish Album of the Year. Their self-released album, Jason, beat off competition from Villagers, Kojaque and Delorentos at a live event in Dublin’s Vicar Street on Thursday night. The band received a cheque for €10,000 and a specially commissioned award.

The Choice Music Prize has been running since 2005 to highlight the musical works of Irish artists. A shortlist of 10 contenders is drawn up each year with a panel of judges drawn from the music media tasked with selecting an overall winner.

O Emperor were a surprise winner on the night but they are a band that have always impressed with their musical ecleticism and idiosyncratic approach. They were pushed all the way on the night by the favourite for this year’s award, Dublin hip-hopper Kojaque.

Despite winning the award, O Emperor had already decided to break up as a band, so whether the exposure they receive from winning this year’s prize changes that decision remains to be seen.

Like many an Irish band O Emperor just found it a financial struggle to keep afloat in a radically different music world to the one they first entered when they began some 10 years ago.

The Irish Times review of Jason when it was released last October said that the band’s farewell record “masterfully captures the true essence of music with 16 spectacular compositions conceived with unfiltered imagination and extraordinary musicianship”.

Prior to the winning album being announced, Kildare band Picture This won the Song of the Year award for their track, One Drink

RTÉ2 will broadcast a one-hour TV highlights programme of the this year’s Choice Music Prize featuring performances from this year’s shortlisted acts and band interviews on Sunday, March 17th, at 11.15pm.

Album of the year shortlist

Song of the year shortlist