Come Out Ye Black and Tans: Think you know what it’s about? You probably don’t

It has been on Alan Partridge and a Brady’s ham ad. So what does the rebel song mean? 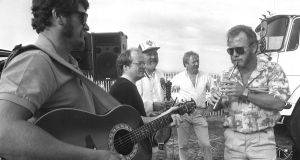 Come Out Ye Black and Tans: the rabble-rouser was sung by The Wolfe Tones. Photograph: Terry Thorp

It has been swirling around the head for nearly a week. After decades of never hearing Come Out Ye Black and Tans, I’m going around humming it to myself.

But we’re not back in rebel territory: after popping up in the new Brady’s Family Ham ad the other day, The Wolfe Tones’ 1970s rabble-rouser may have passed into postmodern comedy with Steve Coogan’s performance of it on Monday’s This Time with Alan Partridge. So what is it about Come Out Ye Black and Tans, and what is the song, anyway?

The Black and Tans were the Royal Irish Constabulary Special Reserve, a notorious temporary police force that Winston Churchill sent to Ireland in 1920 to quell the natives as the republican movement was growing.

Their nickname comes from their mixture of dark-green Royal Irish Constabulary and khaki British army uniforms (alluding also to the Scarteen hunt’s Black and Tans pack of foxhounds).

Bizarrely, the song is actually about a row between republican and loyalist neighbours in inner-city Dublin in the 1920s

The song was apparently written by Dominic Behan, brother of Brendan, as a tribute to their father, Stephen, although authorship of the song is often attributed to Stephen.

The melody was adapted from an old air, Rosc Catha na Mumhan (Battle Cry of Munster), by the 18th-century poet Piaras Mac Gearailt – which is also, in a twist, used in the loyalist song The Boyne Water. The Wolfe Tones version also credits the songwriters Joe Giltrap and Wes McGhee.

The song links the Irish experience with other peoples’ struggles against the British Empire, from the Zulus to the Middle East.

And, bizarrely, the song is actually about a row between republican and loyalist neighbours in inner-city Dublin in the 1920s. The song confronts the pro-British working class, both Protestant and Catholic, in the Dublin of Behan and Seán O’Casey; think of Bessie Burgess in O’Casey’s The Plough and the Stars.

The song is textured by the Behans’ bitterness about the way the Free State treated them after Irish freedom, and also the lingering acrimony of the War of Independence in Dublin. So Come Out Ye Black and Tans begins:

I was born on a Dublin street where the royal drums did beat,
And those loving English feet they tramped all over us,
And each and every night when me father came home tight
He’d invite the neighbours outside with this chorus:
Come out ye Black and Tans, come out and fight me like a man,
Show your wife how you won medals down in Flanders,
Tell them how the IRA made you run like hell away
From the green and lovely lanes of Killeshandra.

(In the Brady’s ham ad the butchers belt this out as “Oh, Brady Family Ham, well it is your only man. Cured for three full days and there’s no added wa-aa-ter. Sure, it’s cooked from one pork joint, unlike others – that’s the point! It tastes just like the ham baked by your mo-oo-ther. Come out you other hams, come and face me, ham to ham...”)

There’s a soccer connection, too. Stereotypically, at least, supporters of Celtic, the Glasgow club, sing Come Out Ye Black and Tans at Old Firm derbies or have it as a ringtone.

And, oddly, there is footage of what appear to be East German soldiers singing what sounds like Come Out Ye Black and Tans on manoeuvres in the USSR in the 1980s. Maybe this shouldn’t be too surprising, as there are German-language versions of Irish melodies (and Hitler was fond of the odd Irish folk tune).

Which roughly means (thank you, Google Translate): “The sons go off, are not even really tall, were born long after the last war. But the man surely knows how the bread of the war smelled, maybe he lost his father there.”

Oh, and a black and tan is also a beer cocktail, made by layering a stout or other dark beer with a pale ale or lager.

There you have it.