‘Oasis distorted the idea of what the Manchester scene was’ 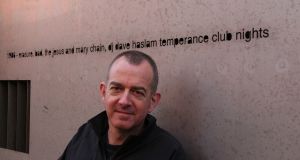 Dave Haslam: 'Mark E Smith always seemed to symbolise something beyond himself'

Studio 54, Cream, CBGBs – some places have delicious mythology battered into their very foundations. The Hacienda, likewise, was ground zero for a Manchester music scene that shapeshifted from its early punk beginnings into the epicentre of acid house, Baggy and Madchester.

And as its resident DJ, Dave Haslam, had a more interesting vantage than most. In a literal sense he presided the changing fashions, homespun dance moves and communal bliss. Even as an insider, he remained an observer of the explosion of the Manchester scene, watching as pals such as Morrissey, Tony Wilson and Mark E Smith built mythologies of their own.

It’s a view that offers much of the heft of his latest book, Sonic Youth Slept on My Floor. Hacienda hagiography is easy to come by, but Haslam’s book – an affectionate look back at his career as a sometime event organiser, fanzine creator and DJ – offers an entirely different perspective.

The book is stuffed to the corners with ticklish celebrity encounters, for a start. Early on, he invites Morrissey to tea: panicked when he realises the Smiths frontman is a vegetarian, he cooks up a batch of cauliflower cheese (Morrissey declines, having had tea at his mum’s). Haslam takes Sonic Youth to a Pizza Hut in Leeds, attempting to bond with Kim Gordon over the salad bar (they did later sleep on his floor, as did the Butthole Surfers). There’s the time he sort of falls in love with Tracey Thorn. The time he encounters Steve Albini, DJs at Eamonn Holmes’s birthday, and buys David Byrne biscuits.

The mundaneness of the encounters are often the most thrilling bits, not least because they involve artists who have been deified.

“I wanted to really celebrate that,” notes Haslam. “People have this idea that success in music involved five-star hotels and it was anything but. Likewise, being a DJ was more about spending more time in record shops in the daytime than being in nightclubs.”

Already the author of four pop culture books – he found fame, perhaps predictably, as a talking head in the days after the Hacienda’s demise – Haslam decided to write a more personal, “emotionally invested” account after reading Viv Albertine’s 2014 memoir.

“I really related to her,” says Haslam. “She was at the centre of punk, and I’m not making claim to being an integral figure [of the Manchester scene], but like her, I contributed. I participated.”

Among his most treasured encounters was the more recent time he introduced Nile Rodgers to Johnny Marr.

“[Nile’s] an amazing guy, very generous, and halfway through, Marr appears and arrives into this funny little dressing room,” recalls Haslam. “I thought they knew each other [as they’d played guitar on a track for Bryan Ferry]. They talked, really boringly, about guitar strings for five minutes, then Johnny says, ‘You do know I named my son after you?’ I thought to myself, This is why I’m on God’s green earth.”

In the opening chapters, Haslam recalls how, as a youngster in working-class Birmingham, he was in thrall to Blondie, Andy Warhol, and the Velvet Underground. Opened to a world of culture and ideas, he became aware of how a solid sense of place could be found between the grooves.

“In the early 1980s, no one expected to be rich and famous,” he says. “We wanted to get away from that Thatcher, conformist, consumerist Britain and find an alternative. I used to follow weirdly dressed people around town in the hopes they would lead me to something more interesting than Saturday night TV. And so it happened.”

Asked why he believed the Manchester music scene went global the way it did in the 1990s, Haslam adds: “I think it was all very authentic. I realised when writing the book that no one was jumping on a bandwagon, or faking anything. The scene was built by people who absolutely loved music.”

There was the inevitable ‘peak Manchester’ moment.

“We had a couple of years in the Hacienda before anyone was really that interested,” says Haslam. “Journos from London would never come 200 miles up the road to see what we were doing. But then Oasis put the scene into areas that we hadn’t. They distorted the idea of what the Manchester scene was. They had such strong personalities and a strong look that the scene became too much about lads in bands.”

The Hacienda’s enduring legend, meanwhile, can be attributed to one simple truth: it’s not open anymore.

“It’s more famous now than when it was open,” laughs Haslam. “No one knew how to take the music we were playing. Clubs like Cream and Ministry built on what he had done, but we had to create the blueprint for that. But look at Robert de Niro. If he, god forbid, had been knocked down or killed, or retired at 30, he would be far more legendary now than he might be having made Meet the Fockers. We fell under the bus at exactly the right time.”

In the end, the demise of the Hacienda was swift, and to Haslam’s mind, unexpected. By June 1997, the city was plagued with criminal activity. Haslam, more used to women propositioning him in the DJ box, opened the door of the box one night to a punter pointing a gun at him.

“We struggled to keep the badness out of the clubs,” he recalls. “We know how wonderful those clubs were for people, but there was a sense that if the gangsters didn’t close the club, the police would. I think when the Hacienda did close, there was a degree of relief that those pressures had been lifted.”

Some years ago Haslam sold his sizeable record collection to DJ Seth Troxler, a passing of the baton: “It was a symbolic act, too, to lighten my load,” he admits. “The spirit of the Hacienda and Manchester was not to look back and be predictable. Pretty soon, the perception of Manchester was that it was backward-looking, obvious and predictable.”

Some elements of the scene have remained more unpredictable than others. Few could have predicted Morrissey’s descent into full-blown curmudgeon. Even Haslam is confused by the singer’s recent proclamations; among them, that Hitler was “left wing” and that multiculturalism leaves places “with no culture”.

“I just don’t recognise the Morrissey of today,” sighs Haslam. “The Morrissey I hung out with from ’83 to ’85 was a genuinely informed, charming, interested young man. The bitterness and hate he seems to have now … The lack of charm is mind-boggling. I don’t think it helps when you live abroad surrounded by sycophants. There should be a helpline set up for fans dealing with the 21st-century version of Morrissey.”

Haslam remembers Mark E Smith, who died in January, with no end of affection. “He was such a funny man,” he enthuses. “One of the things I wanted to do with this book was paint a slightly more 3D version of him. There was that stereotypical idea of him being a hopeless drunkard, but he was very creative and avant-garde. I was pleased his death was marked so hugely. To me, he always seemed to symbolise something beyond himself.”

With Haslam affording Smith and the wider scene from which he was born a huge amount of affection, one question looms large. Given that he writes of the power that music has to change lives, does he feel that today’s younger music listeners, with an entire universe of music readily at their fingertips, missed out on the time-honoured magic of finding new music the old way?

“I don’t feel they’ve missed out at all,” says Haslam. “I talk about how the generation before mine would bore us to tears about coming of age in the era of the Beatles, Woodstock and the Rolling Stones, and by implication, that we’d never enjoy anything as remarkable as they had. But we made our own culture. I feel like the lesson I’ve learnt is not to look down on any of the generations that have come after ours by saying the options aren’t there any more and the doors are closed.”

He pauses for a moment before adding: “Course, if you’d asked me that 15 years ago, I’d probably have been a little less positive.”

Battle of Cable Street: when the Irish helped beat back the fascists
Real news has value SUBSCRIBE