The groundbreaking 22-year-old from South Korea picks up €15,000 prize 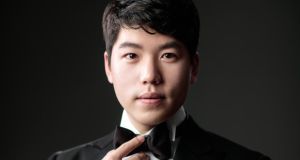 The triennial Dublin International Piano Competition is catching up. Last time around, in 2015, it chose its first ever female winner, France’s Nathalia Milstein. This week, 30 years on from the first competition in 1988, it chose its first Asian winner when it awarded its €15,000 first prize to 22-year-old Sae Yoon Chon from South Korea.

The groundbreaking Chon, a pupil in Toronto of the competition’s artistic director and jury chairman, John O’Conor, not only took the top prize but was also awarded the €1,000 Mai Hannon Prize for the best performance of a work by Liszt.

The second prize went to 19-year-old Evren Ozel from the United States (who also won prizes for his playing of Mozart and Chopin), the third to Alexey Sychev (29), a Russian pupil of jury member Jan Jiracek von Arnim, and the fourth to Aristo Sham (22) from Hong Kong.

Sham also won the RTÉ NSO Prize, judged by the members of the orchestra, for the best performance by a finalist other than the prizewinner. For my money, his handling of Prokofiev’s Third Concerto with the NSO under Andrew Mogrelia also outclassed the winner’s playing of Prokofiev’s Second.

The batch of prizes for the highest-placed Irish competitor went to Eoin Fleming (20), another O’Conor pupil, who also took the prize for the best performance of one of the specially-commissioned test pieces, Deirdre Gribbin’s Unseen. I found myself more taken by the musical balance that Kazakh Alim Beisembayev (20) brought to Conor Linehan’s Intermezzo.

Winning an international piano competition is no longer the sure route to fame that popular imagination still seems to assume it is. In their heyday the Chopin in Warsaw, the Tchaikovsky in Moscow, the Van Cliburn in Fort Worth and the Leeds had the apparent ability to create stars overnight.

They were operating in a world where the total number of international piano competitions held each year was still below 50. By the time Dublin arrived on the scene in 1988 it had risen to about 100.

Today the annual number is pushing 350 and the grand total of such competitions is about 900 – the disparity is explained by the fact that most of them are triennial or quadrennial. In other words, new first prizewinners are being crowned at the rate of nearly one a day.

Winning is a personal triumph and a genuine career boost for the lucky player. Competition organisers can bask in the glory of the career boost they provide to their winners. And the work of competitions serves other laudable goals, too.  But no normal individual in their right mind is going to try to track the artistic and career achievements of so many winners. The sad fact is that the proliferation of competitions has long been inimical to the kind of high public that made competitions so attractive in the first place.

Crunch the numbers for a moment. The Dublin competition allows about 60 players into its first round and has multiple applicants for each of those places. The overall pool of wannabe competitors runs well into the thousands and most of those who fail to win a prize face career prospects as performers that are not exactly enticing.

This is the unromantic reality of the world which both the competitors and the competitions themselves have to negotiate. The competitions compete among themselves, too, in the business of attracting the best competitors. It’s all not a million miles away from the cliché of the aspiring Hollywood actors who spend their lives waiting tables in Los Angeles. And the same rules about good luck and the indefinable X-factor definitely apply.

The jury voting system in Dublin involves no ranking of individual players by individual jurors during the first three rounds. The results can be as crude as you would expect from the first past the post system that is involved. Both the enthusiasm and distaste any juror may feel for any particular player is ignored.

The outcomes predictably tend to be weighted against individuality and imagination in favour of the safer centre ground. Because the voting in Dublin is not made public, there’s a tendency for people to think of the jury as a homogenous entity. The truth is different.

At Tuesday’s final, O’Conor revealed that eight of the 11 jury members had placed Chon first, the highest number since Antti Siirala’s unanimous win in 2003. You can extrapolate from this that dissent within the jury about the winners in 2006, 2009, 2012 and 2015 was at the very least about 35 per cent.

From the point of view of technical delivery, the level at this year’s competition was probably the highest ever. Musically, it was less interesting.  There were only a few players I would have wanted to hear a full recital from. Neither of the two who made it to the semi-finals, Anna Geniushene and Aris Blettenberg, survived beyond that point. Both are players with an extremist streak, as is Tomer Gewirtzman, who exited after the second round.

Though I found myself willing to overlook these players’ miscalculations, I can see why others might respond differently.   The immediate and future reputation of the competition – and O’Conor confirmed that funding for 2021 is already in place – now rests in the sure and safe hands of Sae Yoon Chon.