Ruban Nielson: ‘I don’t want to be using my life for clickbait’ 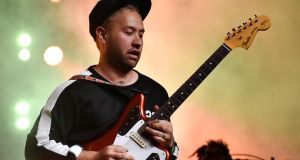 Ruban Neilson of Unknown Mortal Orchestra: “I don’t wanna be the sort of person who is just using their life to give people clickbait.” Photograph: Mike Windle/Getty Images for Coachella

Ruban Nielson is sitting outside a cafe in Paris when he suddenly pauses mid-sentence, somewhat perplexed. A number of deafening police and ambulance sirens have momentarily halted our conversation with the Unknown Mortal Orchestra frontman, who apologises for the disruption.

“It’d be the most UMO thing ever if I got stuck in a terrorist attack, or something,” he says, laughing.

While Nielson may make light of such a situation, he is no stranger to drama – as the past few years, and particularly the making of his band’s new album, Sex & Food, have demonstrated.

In search of a new direction after three critically acclaimed psychedelic indie rock records, the 38-year-old New Zealander took to to the road to write and record album No 4 in various locations around the world with his portable studio and bandmates (including brother Kody) in tow.

In Mexico City, he was caught in the midst of the catastrophic earthquake that struck in September 2017. He travelled to the demilitarised zone between North and South Korea (later spending some time recording in the nearest studio, which was in Seoul) and then there was the trip to Hanoi, Vietnam, where he was briefly detained by police for attending a gig that was “kind of like a protest thing”. “That was a very interesting experience for me to go through at the time,” he says. “It didn’t give me any answers to anything. It just helped to make everything more ambiguous than ever. But on the way back, I started writing on the plane and I had most of the lyrics that I needed for the rest of the album by the time I landed.”

One thing’s for certain; he never would have thought that he’d be here, figuratively and literally, eight years after he anonymously uploaded Unknown Mortal Orchestra’s first song to Bandcamp.

“We joke about it all the time, Jake [Portrait, bassist] and I,” he chuckles. “When the band started, we had funny dreams about what might happen – but we kind of passed those dreams quite a long time ago. At some point we sort of felt like we were just kind of making the whole thing up as we go along.”

Unknown Mortal Orchestra’s output has been both critically acclaimed and hailed for its eclecticism from the very beginning, but 2015’s Multi-Love proved to be their biggest release to date. It also drew a lot of attention to the band, after a Pitchfork profile documented Nielson’s nontraditional relationship set-up (he and his wife were in a relationship with another woman at the time). Looking back on the kerfuffle that followed, he says that a lot of it was out of his control.

“I don’t really feel like I had a choice at the time, so I don’t really feel like I can ‘regret’ it,” he shrugs, referring to his openness with the journalist in question. “But I think when I was going into this record, I made sure that I wasn’t going to be specific about the experiences that inspired it. So it was two things, really; the first was trying to make sure that I keep some of my life to myself, and the second was that it’s a little bit counterproductive to dominate the reading of the songs by telling everybody what experiences influenced it.

“But I feel like it’s actually really easy to decode the record; it’s just whether people are willing to do it. Then again, who cares? At the end of the day, they’re just supposed to be jams for people to listen to on the train to work and stuff like that, so I don’t think what happens in my life is particularly that important. If I wanted to, I could weave a story around this one, but I’m just not ready for that to happen to my life again. And also, I don’t wanna be the sort of person who is just using their life to give people clickbait,” he laughs. “So I just want to emphasise the music a bit more for a while. That was part of the reason we travelled around so much; to create an alternative story and lots of other things to talk about.”

That said, some of the tracks on Sex & Food – such as Hunnybee, a sweet love song written for his young daughter, or American Guilt, which tackles his conflicting feelings about living in the US for the past decade and becoming “more American” – are undoubtedly more on the nose.

“When I first moved to America I was kind of bemused by everything, and I felt very much like a lot of the crazier things that happened, I could kind of shrug off as ‘Those crazy Americans’,” he says of the latter track. “But after living there for a while and understanding it more, it gets harder for me to be the Kiwi who always says ‘Those crazy Americans’; to have some sort of intuitive feel for the country and also become more Americanised myself. It wasn’t really this thing of pointing the finger at other people, more like it was something like a disease that I was catching or contracting. You know, a lot of friends in New Zealand like to listen to it when they’re driving around and thinking how much they hate America,” he laughs. “I think the song probably functions that way, too, which is fine – but I’m not really the kind of person who wants to be writing songs about what’s wrong with other people. I prefer to kind of just criticise myself or make jokes at my own expense.”

Whatever the lyrical context of the album, the piecemeal manner in which it was recorded gave the band licence to make a record that is arguably less structured than its predecessors, but no less engaging.

“I kind of felt like I wanted to try and play the game a little bit differently, I suppose,” agrees Nielson. “I really felt like the music industry changed a lot between Multi-Love and this record, and everything’s kind of shifted to streaming. So the whole approach – even with the record being as eclectic as it is – comes a lot from thinking about the way records are issued now. I thought about the way albums are kind of torn apart by playlisting anyway; so it didn’t feel like it had to be as cohesive as I used to believe it did. I did want the album to make sense from beginning to end – and I think that it does – but it gave me permission to almost make three different records and sort of mash them all together.”

Eight years after first forming Unknown Mortal Orchestra, Nielson has had to revise that bucket list first dreamed up in Auckland. He claims not to be one for looking too far ahead, but as far as he’s concerned, UMO will keep making music for as long as they possibly can.

“I hope it’s not finite,” he says, as the faint echo of yet another police siren echoes in the distance. “It feels like something I would always have something to contribute to ... so I do feel like I could make another four albums. I feel like I haven’t had to compromise anything; I have a group of people around me who seem to believe in what I do. With every record, I think that I might have gone too far – like, ‘How much longer can I be this personal and still make a living?’ but it’s still going. So I think we’re just still kind of making it up as we go along... but that’s okay.”

The Forbidden Fruit carnival pitches up at the Royal Hospital, Kilmainham for three days of music (June 2nd-4th), with the 2018 programme offering something to suit most music fans’ tastes. The first two days heavily favour the dance/electronica audience, with the likes of Justice, Glass Animals, Richie Hawtin, Stephan Bodzin, Alex Boman playing on Saturday, and Bonobo, FourTet, Floating Points, Ben UFO, Bicep and more on Sunday. Beastie Boys man Mike D and actor Idris Elba will even be on hand to perform DJ sets on Saturday.

Monday’s line-up caters largely for the indie and rock crowd, with headliners The War on Drugs being joined by Grizzly Bear, Spoon, Unknown Mortal Orchestra, Warpaint and the inimitable Thundercat, among others. There’s also a healthy Irish contingent across the weekend, from David Kitt to David Keenan, and Booka Brass to hip-hop artists Paul Alwright and Mango & MathMan.

When the lights go out at the Royal Hospital each night, the Forbidden Fruit By Night programme keeps the party going in various city centre venues, with after-parties featuring a number of acts, from the aforementioned FourTet, Bonobo, Tensnake and more – playing the comparatively closer confines of Tengu, Opium, Hangar, The Button Factory and others.