‘The The is like a brotherhood or sisterhood. The door is never closed’

The The are back after a 17-year break. Matt Johnson reflects on a life in music, fighting gentrification, modern politics and the transformative power of music 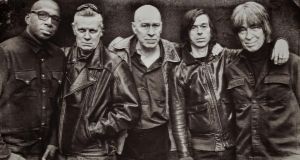 During the 1980s, The The worked with enough guests to give supergroup behemoths like Massive Attack or Gorillaz a run for their money. Despite the involvement of Johnny Marr, Sinéad O’Connor, Neneh Cherry, Jools Holland and numerous others, The The is Matt Johnson, an east Londoner who has anchored this beguiling British group since 1979 and written some of the most distinctive and textured music of the post-punk era. Albums such as Soul Mining (1983), Infected (1986) and Mind Bomb (1989) positioned them as an outsider group with a social conscience, but who could still gatecrash the mainstream and appear on Top of the Pops. In his memoir, Set the Boy Free, Johnny Marr says of Johnson: “Spiritually and mentally, Matt is one of the bravest people I’ve ever known.”

Johnson steps back in the live arena after a 17-year hiatus this summer. The response has been ecstatic, with shows in the Royal Albert Hall and two other large London venues selling out instantly. The The will also visit Dublin and Belfast in July.

“There has been an enormous amount of goodwill, which has been really lovely,” Johnson enthuses. “The last time I performed on a stage was David Bowie’s Meltdown in 2002. Since then, I’ve removed myself from the music industry, so I’m not conceited enough to think there’s a big audience out there waiting to see me.”

This tour isn’t specifically promoting an album or record, although Johnson is putting out a new triple-vinyl limited-edition boxset, Radio Cineola: Trilogy, and publishing an authorised biography. His touring band will feature members from all different eras of the collective over the last 39 years.

“The line-up is kaleidoscopic,” Johnson maintains. “People come and go but they might come back. I like it like that because there is nothing worse than these bands who hate each other’s guts for decades. The The is like a brotherhood or sisterhood. The door is never closed. It’s always nice to reconnect with people again.”

Johnson recently reconnected with Johnny Marr, who he has known since their teens. “Johnny did the guitars for the new single, Can’t Stop What’s Coming,” he reveals. “It was an absolute pleasure. He’s a good friend and a lovely guy.”

Like the former Smiths guitarist, Matt has enjoyed a long and chequered career. “I started off as an independent artist with labels like 4AD, Cherry Red and Some Bizarre,” he says. “I had a long stint with CBS/Sony for 18 years and Universal for a year or two. Then, I took time off from music. When I came back, I wanted to own my own copyright, so I built my own company from the ground up. The workload is much greater, particularly in self-management, which is kind of like being a goalkeeper and a centre-forward all at the same time.”

Songs such as Heartland, Sweet Bird of Truth and The Beat(en) Generation delved into the dark heart of Thatcher’s Britain. The lyrics of Heartland could equally apply to modern times.

“Heartland was written more than 30 years ago, but it seems we’ve come full circle again, especially considering what’s happening in Britain and America,” Johnson agrees. “Back in those days, we had Ronald Reagan, an actor propped up by the ideology from the Chicago School of Economics that inspired the neo-Conservative movement. Problems go in cycles, so it’s no great surprise to find ourselves talking about the same sort of issues again. This time we have Trump and Brexit in the current round of chaos. And what’s going to happen in Ireland with the Border? Chaos has been unleashed and nobody seems to know what to do about it.”

Another cause close to Johnson’s heart is trying to slow the relentless march of gentrification in his native east London. He is the eldest of four brothers, and his father ran a pub in Stratford called the Two Puddings.

“We’re fighting against the over-development of London, but it is a losing battle,” Johnson says. “It’s not just east London, but all over. There’s so much money at stake. A perfect storm has occurred with low interest rates and cheap immigrant labour. The relaxation of planning laws has occurred while funding for groups like English Heritage are getting cut.”

Johnson also recalls when Dublin was battleground for conservation. “When I was in Dublin in the 1980s a lot of young people were complaining about the destruction going on,” he says. “I think most of the cranes in Europe back then were split between Dublin and Berlin.”

Matt finds conservation work difficult and time-consuming. “There’s not enough people fighting for it so it becomes draining,” he says. “At a certain point you have to let it go, be philosophical and adopt a Buddhist approach. Everything is temporary in this world. Even the sun will burn itself out, so a long-term view is much easier on the stress levels.”

As a landlord’s son, Johnson hates the decimation of London’s pub culture. “I liked the fact that there were pubs where your grandfather might have drank in and still be called the same name,” he says. “Local landmarks and some form of continuity is important, especially when we’re in the grip of so much massive change. Humans like a bit of continuity so we can orientate ourselves.”

Music is a primary means for Johnson to orientate through life. When his brother Eugene died, he penned the powerful single Love Is Stronger Than Death. Countless people have told him over the years how his songs have helped them through tough times.

“When people have been touched or moved by the songs it is better than any review,” Johnson says. “To become a part of somebody’s life is a massive honour as far as I’m concerned, particularly in those big moments of people’s lives, such as bereavement or marriage. So many people have written to tell me they buried a family member, or conceived children, to one of my songs. One woman said her husband had it specifically written in his will to be buried to one of my songs. It’s the highest compliment a songwriter can have. It’s intense, but it is what you hope to achieve.”

Ultimately, Johnson sees himself as foremost an artist and musician. “It’s the only thing I can do,” he says. “I got very involved in local politics, but I was out my comfort zone. I was dealing with developers and local authorities who know the game inside out and play dirty, so I was in a disadvantaged position on someone else’s playing field. But when it comes to writing and performing songs, it’s what I was born to do and the only thing I’m really good at. It’s very empowering on a personal level. If it can inspire other people in some small way, then that’s the most I can hope for.”

The The play Mandela Hall, Belfast on July 6th and Iveagh Gardens, Dublin on July 7th

Orchestral Manoeuvres in the Dark
Formed in Wirral, Merseyside in 1978, OMD became immensely popular from 1980 after the release of the anti-war single Enola Gay. Singer Andy McCluskey later came up with the concept for pop girl band Atomic Kitten on the advice of Karl Bartos of Kraftwerk.

Yazoo
Between stints as a member of Depeche Mode and Erasure, Vince Clarke made synthpop with Alison Moyet, who also rose to prominence after the duo split acrimoniously. Their debut album, Upstairs At Eric’s, is one of the genre’s best.

Soft Cell
Best-known for their 1981 cover version of Tainted Love, which was a hit on both sides of the Atlantic, Marc Almond and David Ball also penned Say Hello, Wave Goodbye, an emotional synthpop classic, which was played at the cremation of the late Irish music journalist George Byrne.

Ultravox
Their calling card hit, Vienna, spent four weeks at number 2 in the UK singles chart. John Lennon’s Woman and Joe Dolce’s Shaddup You Face kept it off the top spot, even though it sold more copies than both records.