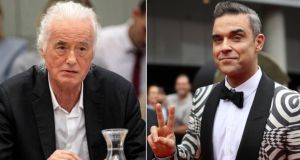 The Led Zeppelin guitarist Jimmy Page has pleaded with planners not to allow the singer Robbie Williams, his next-door neighbour, to build an underground swimming pool in the latest skirmish in the long-running planning battle between the two musicians.

The pair have been involved in a dispute for about five years, since Williams bought his €20 million mansion, the former home of the late film director Michael Winner, in the Kensington district of west London. He wanted to make an extensive list of changes to the house, but Page objected and has kept up his opposition ever since. He fears the construction work will damage his listed mansion, Tower House.

Page appeared at a planning committee meeting at Kensington town hall on Tuesday to tell councillors: “I’m here to plead that you take all necessary measures to protect the Tower House from the threat of harm it faces.”

A decision over granting planning permission to Williams was deferred; speaking afterwards, Page said he was very pleased by the decision. “I think the deferment was a very good conclusion.”

Representatives for Williams gave assurances that any construction work would fall within stringent regulations.

The postponement involves councillors seeking legal assurances about independent monitoring of vibration levels and ground movement from any construction work, as well as the consideration of extra conditions, such as the possibility of workers using only hand tools.

Builders working for Williams have previously been ordered to pay almost €5,500 for breaching noise regulations during their work at his home.

After Tuesday’s committee meeting Page added: “I’m really pleased at the outcome, in so much that the council showed so much consideration to Tower House.”

The guitarist, who has lived at the turreted red-brick property since 1972, said: “There were many things that were said that I found really encouraging. I have been the custodian of the house, and on my watch I feel that I have got to do everything with all these sorts of haphazard things . . . that really it’s my duty while it’s my watch. I’m only the custodian, to pass it on to the next person in the same way I bought it from Richard Harris.” – Guardian