Sarah McBriar started AVA after a trip to Glastonbury. It began as a one-day event, but now she has a four-day party on her hands 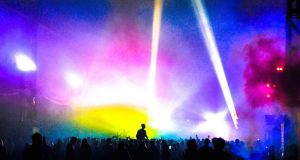 Sarah McBriar is optimistic about this year’s AVA Festival in Belfast, having just emerged from a long meeting on the show’s visual elements. “We’re planning a really special AV show,” she says, with an excited zeal that’s something of a trademark.

AVA, which is abbreviated from “audio visual arts”, seems to be leaning heavily on that middle initial this time around, and McBriar (30) is typically emphatic about both the potential of these plans and the level of graft they’ll need to achieve them.

“We’re doing it all ourselves, pulling from old footage and using different textures and colour palettes. It’s going to be amazing,” she trills before adding, with only a single-digit drop in enthusiasm, “but, yeah, there’ll be a lot of work in it”.

Entering its fourth year in 2018, AVA is now one of the UK and Ireland’s premier dance music events, and the only major combined festival and conference in either country. Begun as a one-day event in 2014, it now takes place over a long weekend, with gigs on four days, a full suite of talks and lectures, and an entire channel with online gig-streaming behemoth Boiler Room, which has gathered more than 12 million views on YouTube.

Not bad for a festival that began as an idle dream of a 24-year-old from Belfast, standing in a muddy English field.

“I came away from a trip to Glastonbury, just blown away by the whole experience,” says McBriar. “I’d met so many amazing people, seen so many amazing artists. I walked away from that thinking, ‘that’s what I want to do.’”

Unlike many people who’ve had that exact same thought and then got right back to binge-watching Family Guy, McBriar took steps to realise this dream immediately. “I worked on lots of different festivals over the next few years, did a master’s in creative producing and actually ended up working at Glastonbury for six months. Ironically, it was there that I found out I’d got the first piece of funding that would become AVA. There I was, stood in a field receiving the email saying I’d gotten the funding back home, so it was a weird full loop – four, five years later to have been back where the whole thing had started.”

Not that this was instantaneously a joyous feeling. “Well, there was a really mixed feeling of this is incredible news and then a feeling of ‘s**t, can I actually do this?’ Also, you get awarded funding, you can’t backtrack, you’ve won it against loads of other people so you have to go through with it.”

In other words, she was terrified. “Absolutely bricking it!” she laughs.

The AVA she’d pitched had been slightly smaller in scope, but it still bore traces of its current form. “We’d pitched it as what it is,” she recalls, “an audiovisual arts festival, and a creative platform for artists in Belfast. When we started, we built it up from a small one-day event to [where] now it runs a full suite of AVA-related things from Thursday to Monday: opening show Thursday night, conference on Friday, concerts Friday and Saturday and then closing gig on Sunday. It was always the same, though, and with the talks very much part of it.”

This year’s conference has discussion from Bicep, Mano Le Tough, Saoirse and house music legend Larry Heard, fresh from releasing his first album in 25 years. In a medium not necessarily regarded as one for speechifying, how do you curate an entire day’s talks with DJs, producers and artists?

“It’s important they’re comfortable talking in public and want to do it,” McBriar says. “We don’t want it to feel forced or for anyone to feel uncomfortable because someone can’t speak. And we’ve always had great luck with them. I think audiences get a lot out of it, it’s so inspiring. I love hearing people’s stories, be it advice or little anecdotal nuggets.”

Artists love coming to Belfast and all they talk about is the crowd –they’re just electric. It’s completely unpretentious

Previous years have featured Juan Atkins telling the tale of how he bought his 808 off Frankie Knuckles, Jeff Mills talking about his thoughts on space exploration, and R&S Records’ Renaat Vandepapeliere tearing strips off Jeff Mills for talking too much about space exploration.

“I think the combination with the conference gives us an edge – in the UK and Ireland, no one else is doing it. There’s Sonar in Barcelona and there’s ADE in Amsterdam, but we work probably more grassroots. Other festivals are about booking the biggest names or a beautiful venue, but we have those elements.”

Long held in the shadow of Belfast’s iconic Harland and Wolff cranes, Samson and Goliath, the festival has itself now moved to a new, equally industrial location, although McBriar insists neither choice was for aesthetic reasons.

“Since Belfast, and Ireland generally, has such bad weather,” she explains, “it worked that our space was very industrial. We were in an old shipping warehouse for three years, now we’re in an old B&Q warehouse. A lot of festivals are set in a beautiful stately home or field, and that’s cool, that’s their thing, but with ours it was never about that.”

Emerging talent has been something of a watchword for the festival which also operates a talent programme for up-and-coming artists, across the island. “We’re very much North and South, we’ve got a really good wealth of talent from both, and another thing that’s really come through is female talent since we started. There’s been such a growth in female artists.”

“We do emerging talent platforms, three actually: DJ, producer and visual talent. They open around February and you apply, we announce the winners a few weeks before the festival. The producers submit a track and get feedback at the conference, and then the winner will be released on Timmy Stewart’s label, Extended Play. The DJ wins a slot at the festival, and the visual artist is projected on the courtyard and outside of the Bullitt Hotel, as well as featuring in the festival.”

Belfast is itself having something of a moment, described more and more as a rising dance music powerhouse, with recent editorials from Clash and Resident Advisor declaring it among the best places in the world for club culture. McBriar thinks the city’s attractions are simple. “Artists love coming to Belfast and all they talk about is the crowd –they’re just electric. It’s completely unpretentious – everyone’s welcome, any tourist or someone coming in feels welcome and at home, and we have people coming to the festival who don’t know anyone before they do so.”

This year’s line-up should have a few treats for them when they do, with live sets from Kink and Larry Heard, as well as local heroes Bicep performing material from their first album live, as well as sets from Mano Le Tough, Denis Sulta and Holly Lester. I ask McBriar to take a breath just long enough to tell me her own personal highlights of this year’s festival. With an enthusiasm to which I’m now well accustomed, she dutifully names the entire line-up, before apologising through laughter. On further prodding, she does admit to one or two core favourites.

“Well, one thing I’m excited about personally,” she says, as I envisage a conspiratorial tap on the nose, “is Helena Hauff. I saw her at Dekmantel last year and as soon as I got home I booked her that Monday. She blew my mind, she’s incredible.

“That and Bicep. Bicep? Live? In Belfast? That alone is going to be crazy.”