Nick Cave: ‘Perhaps rock music needs to die for a while’ 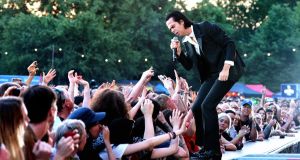 Nick Cave: ‘Art must be wrestled from the hands of the pious.’ Photograph: Gus Stewart/Redferns/Getty

He is seen as one of rock’n’roll’s last defenders: showman, icon, innovator. But the musician Nick Cave has cast aspersions on the beleaguered genre’s future as it faces a post-#MeToo reckoning with its legacy of bad behaviour.

A fan wrote to Cave’s website, the Red Hand Files, to ask how he felt about “the current trend of connecting the shortcomings of an artist’s personal conduct and the art they create and using that criteria to determine if said works are corrupted and therefore to be relegated to the dustbins or not?”

What did it mean for art’s future, they wrote, “if we expect our artists, those that help us collectively explore and understand the human experience, to be morally perfect and beyond reproach?”

In this present form perhaps rock music isn’t worth saving. The permafrost of puritanism could be the antidote for the weariness and nostalgia that grips it

Cave, describing modern rock music as “afflicted with a kind of tiredness and confusion and faint-heartedness”, suggested that “the new moral zealotry that is descending upon our culture could actually be a good thing”.

He continued: “Contemporary rock music no longer seems to have the fortitude to contend with these enemies of the imagination, these enemies of art – and in this present form perhaps rock music isn’t worth saving. The permafrost of puritanism could be the antidote for the weariness and nostalgia that grips it.”

In time, he wrote, he hoped that this “moralism”-induced cull might mean that a “wild, dangerous and radical form of music can tear its way through the ice, teeth bared, and rock’n’roll can get back to the business of transgression”, a force he described as “fundamental to the artistic imagination, because the imagination deals with the forbidden”.

In the wake of allegations being made against Ryan Adams, the posthumous cultural reckoning with Michael Jackson’s alleged paedophilia and the ongoing trials of the R&B singer R Kelly, accused of abusing dozens of women over several decades (allegations he has denied), fans and critics have been reckoning with the debate about whether one can separate the art from the artist, and whether bad behaviour is integral to artistic talent.

In his letter, Cave wrote: “It is the artist who steps beyond the accepted social boundaries who will bring back ideas that shed new light on what it means to be alive. This is, in fact, the artist’s duty – and sometimes this journey is accompanied by a certain dissolute behaviour, especially in rock’n’roll. In fact, the nature of rock’n’roll is dissolute.”

Cave has never prevaricated about the darker elements of his own background. At age 19, he found out about his father’s death while his mother was bailing him out of jail on a burglary charge. He has been open about his former heroin use, and made his name by writing lyrics that explore sex, violence and damnation with a cartoonish, excessive edge.

He added a caveat: “Sometimes an individual’s behaviour is purely malevolent, and this surely needs to be exposed for what it is – and we must make a personal choice as to whether or not we engage with their work.”

Perhaps rock music needs to die for a while, so that something powerful and subversive and truly monumental can rise up out of it

Figures that Cave identified as “intent on murdering creativity” might “serve a purpose” at what he has described as “this depressing time in rock’n’roll”, he wrote. “Perhaps rock music needs to die for a while, so that something powerful and subversive and truly monumental can rise up out of it.”

In January 2018 the consumer-insights company Nielsen announced that hip hop had surpassed rock as the most popular genre of music in the US for the first time in music history. Seven of the top 10 most popular albums of 2017 were rap records.

In November, another of Cave’s Red Hand Files letters went viral, in which he responded to a fan asking about Cave’s experiences with grief following the death of his 15-year-old son, Arthur, in 2015. “Grief is the terrible reminder of the depths of our love and, like love, grief is non-negotiable.” – Guardian