The best jazz gigs in Ireland this week 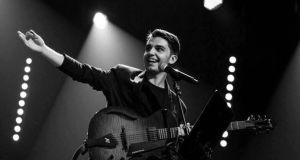 Wunderkind guitarist Andreas Varady doesn’t appear in his adopted homeland too often these days. Since emerging as a busking prodigy on the streets of Limerick at the age of nine, the Slovakian-born virtuoso of Romani extraction has ascended to the starriest heights in the jazz firmament, drawing praise from guitarists like Louis Stewart, George Benson and Lee Ritenour along the way and signing to Quincy Jones’ management company after the legendary producer spotted him at the Montreux Jazz Festival. A naturally gifted guitarist, with a deep understanding of the history of his instrument in jazz, what is perhaps most to Varady’s credit is that, despite all the plaudits and the starry company, he has kept faith with his longstanding trio with his father Bandi on bass and his younger brother Adrian on drums.

Keyboardist and composer Trevor Knight’s Devil’s Spine Band references one of the more unlikely events in the life of Oscar Wilde – a lecture tour of the Wild West in 1882, and in particular the day the great dramatist rode into Leadville, Colorado to speak to, and drink whiskey with, the miners there. Wilde later recalled a sign he saw in a local saloon: “Please do not shoot the pianist. He is doing his best.” Knight’s best, as fans of Auto Da Fe will know, is pretty damn good, and his Wilde West show features long-time collaborators guitarist Ed Deane, bassist Garvan Gallagher and drummer Tom Jamieson, plus a special appearance by Ireland’s leading jazz vocalist, Honor Heffernan.

The Dublin Jazz Co-Op series, currently curated by vocalist and pedagogue Jenna Harris, continues to explore the cutting edge of music making in Ireland and is an important showcase for a new wave of creative musicians who are cheerfully abandoning all notions of genre. This week, it’s a duo performance gently pushing on the post-rock envelope from Inni-K drummer Brian Walsh and guitarist Shane Holly, who composed the music for the multi-award winning animated film Coda.

Naples guitarist Mino Lanzieri is one of the rising voices of Italian jazz and his 2017 release, Endless, featured the front rank US rhythm section of bassist Reuben Rogers and drummer Gene Jackson. He flies into Dublin this week to hook up with guitarist Hugh Buckley and his own front rank rhythm section of bassist Dave Redmond and drummer Dominic Mullan.

The regular jazz improv slot at Crane Lane – run by leading Cork musician and impresario Paul Dunlea and always a must for the Leeside jazz-inclined – takes things up a notch or two this week with a special showcase from the Cork School of Music Big Band. Directed by rising Cork pianist and composer Cormac McCarthy, the ensemble, which performed at the legendary Jazz Standard club in New York in 2017, will be playing contemporary and classic big band charts, including music by McCarthy and CSM students and alumni.

Following the release of her excellent self-titled EP last year, Dublin-based Romanian vocalist Aleka launches her first full length album this week with a heavyweight band that features the hugely respected Dutch drummer Eric Ineke. Person I Knew is an atmospheric set of jazz standards, including Wayne Shorter’s Iris and Thelonious Monk’s Round Midnight, played by a powerful, multi-generational group that includes bassist Ronan Guilfoyle and his son Chris on guitar. Making a rare appearance on home ground, the elder Guilfoyle in particular will revel in the deep swing purveyed by a legend of European jazz drumming whose credits include appearances with giants of the music like Dexter Gordon, Hank Mobley and Don Byas.