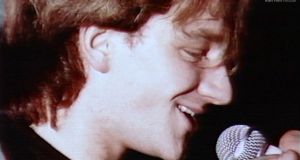 Bono in a still from the film U2: An Cat Dubh. Photograph: IFI/Merry Doyle

For the first time in nearly 40 years, extended footage of U2 shot when they played the roof of an inner-city Dublin community centre in 1982 is to be released.

There is hardly a more scrutinised or well-documented band in the history of rock music than U2 and footage, especially rare footage from the early years of the band, is prized.

Taken in Sheriff Street, the footage was shot by Dublin filmmaker Sé Merry Doyle on Saturday, July 17th, 1982, a month before singer Bono married Alison Stewart. The band, at that point, were between their second album, October, released in 1981, and War, which propelled them into the mainstream in 1983.

Doyle filmed the band’s concert while making a documentary about the demolition of tenement housing in the Gardiner Street/Summerhill area and during the Inner City Looking On community festival.

U2’s appearance had been kept secret, so only a small number of the 300 or so people who saw them perform were followers of the band – the rest were locals. It was a chaotic scene, with local youths clambering up on to the roof of the community centre and grabbing at the band’s equipment.

Twice during the band’s 45-minute set a swarthy local man stumbled on stage looking to sing, taking the microphone from Bono before a crew member recovered it. The man wanted to sing a Chubby Checker song, Let’s Twist Again, so Bono calmed the situation by singing it a-capella before the band started into An Cat Dubh from their debut album, Boy.

Bono even managed to fit in a brief homily about the underprivileged area before the band, three of whom were born-again Christians, played Rejoice from the October album – when the buildings around them come crumbling down, the singer told the crowd, one word could save them: rejoice.

Mr Doyle included 45 seconds of the footage in his 1982 documentary Looking On, and a short excerpt in his 1997 follow-up documentary Alive Alive O.

“It was an amazing gig. There was one journalist there, Bill Graham from Hot Press, who often wondered would they ever get back to [the level of] that gig on Sheriff Street.

“It really is the beginning of the U2 sound. They are raw and they are rough and they are dangerous. It was a great night. I was lucky to catch it.”

Mr Doyle said he kept the footage under lock and key since 1982. “A couple of private collectors tried to buy it off me but because they can’t control the music, the natural home for it is the U2 organisation,” he said.

“Bono is aware of the footage and loves it. Aside from the little fragment that was in the actual film, it has not been shown before.”

The footage is being made available to the public online through the Irish Film Institute (IFI), which has digitised the material from Mr Doyle’s Loopline Collection.

The other documentaries which are digitised include Alive Alive O, which examines a time when street traders were coming under increased pressure from legislators.

Essie’s Last Stand, perhaps the most timely piece in the collection, examines an elderly woman’s fight to stay in her home as it is earmarked for development.

In addition there are 30-minute interviews with writers including Margaret Atwood, Richard Ford, Gore Vidal, Colm Tóibín and Doris Lessing.