Leaving Neverland: Did the whole world lose its mind about Michael Jackson? 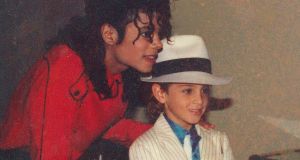 Leaving Neverland: Wade Robson said Michael Jackson was one of the ‘most gentle, loving, caring people’ he knew

Almost 30 years ago, a mother in Australia prepared to board a plane for Los Angeles with her young son and daughter, a move that would decisively break up their family for the chance to live in a fantasy. Her father asked her a direct and simple question: “Have you lost your mind?”

Joy Robson was moving for a few reasons, among them the opportunities it would bring her young son Wade, a dance prodigy. But high among them was to be closer to Michael Jackson, the biggest pop star in the world, who had come to seem like a close family friend. How does anyone trust such a man, who by that time had already begun sharing his bedroom with her son? Or had Robson lost her mind? “Yes, I think I had,” she says today.

Both Robson and Safechuck make compelling subjects, interviewed at unflinching length, and each emotionally conflicted

One unasked question in Leaving Neverland: Michael Jackson and Me (Channel 4, Wednesday, 9pm) – a documentary that, over the span of two parts and almost four hours, leaves very few stones unturned – is whether or not we had lost our minds as well? How else could a man who preferred the company of children, on stage, in private or in the vast Versailles of his giddying, dream-like home, be excused as a harmless eccentric, no more than a child himself?

Director Dan Reed’s film is a gruelling watch, a steady dismantling of the intoxicating aura that Jackson created, a sustained assault on innocence: on that of his alleged victims, James Safechuck and Wade Robson, their beguiled families and any fans who would still rather have their pleasures free from contamination.

“He was one of the kindest, most gentle, loving, caring people I knew...” begins Wade Robson, “and he also sexually abused me, for seven years.”

Both he and Safechuck make compelling subjects, interviewed at unflinching length, and each emotionally conflicted. Separately they unravel similar stories about their earliest awed encounters with an idol who indulged them lavishly (“It was like I’d been anointed in some kind of way,” says Robson), whisked their families away on tours, holidays, spending sprees and retreats to Neverland, gained their confidence, and then sexually corrupted them.

At the same time, he pushed their families away, both figuratively and literally: “Our rooms got further and further away from Michael’s room,” remembers Stephanie Safechuck, who remonstrated with Jackson’s people. (If there’s one unfortunate absence in the documentary, it is of those people, Jackson’s enablers and protectors, whose innocence is harder to credit.)

That it should take this long for Safechuck and Robson to come forward is something that has been seized on by those who would prefer not to believe their stories. (Both testified, as children, in support of Jackson during another case of child sex abuse.) But the pain and anger they display now as they unravel the illusions and coercions of a practiced manipulator are harder to dismiss.

Their awakenings come late, when they can finally appreciate the difference between the king of pop and the abuser beneath. It seems beyond time that we do too.

Yungblud: ‘My generation is over being divided’
9