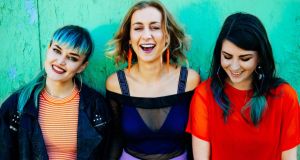 How awash I felt with patriotism the first time I spun Wyvern Lingo’s smoothly bumpin’ self-titled debut record. The Bray band unleash a sleek and scintillating sound that recalls Destiny’s Child, Toni Braxton, En Vogue, Maxwell and a few dozen other contemporary R&B acts from the 1990s and 2000s – the artists that people of my generation absorbed everyday after school on MTV Base, a channel that at the time felt like a gift from the gods of new-age digital television.

The Co Wicklow trio – Karen Cowley (keyboards/vocals), Saoirse Duane (guitar/vocals) and Caoimhe Barry (drums/vocals) – parade the sounds, attitude and fashion of that period in a manner that tickles your id in irresistible ways. Yet, you can trace the genesis of their sound all the way back to Aretha Franklin via Van Morrison with a shot of indie pop too. Funk, soul: these are both musical genres and undeniable truths of humanity. George Clinton once demanded of his listeners: “Tear the roof off, we’re gonna tear the roof off the mothersucker.” If these three ever ask the same, they might never be allowed to play an indoor venue again.

“Lately, we’ve been embracing the fact that we love ’90s R&B and 2000s R&B and hip-hop,” says drummer and vocalist Caoimhe Barry. “What I find to be the tastiest kind of drumming is R&B and hip-hop drumming. A lot of the times you [Cowley] might show me something and I’ll start playing the beat and you’ll be like, ‘Oooh, I wouldn’t of thought of it like that.’ So I feel sometimes that can steer it into having that kind of sound.”

“I remember all of the songs that were on the radio and I’d sing along to, top of my lungs – Destiny’s Child, Mary J Blige,” adds Cowley. She struggles to remember one particular track so I’m treated to an impromptu a cappella performance: “Take my shackles off my feet so can dance,” she sings. Ah, that’s Shackles (Praise You) by Mary Mary, a swinging gospel pop record from 1999. “That was the radio,” smiles Cowley. “That was the calibre of pop music, it was so good.”

We’re sitting in a Dublin pool hall, a setting loaded with retro video games and other Americana from an altogether different time than the Napster-era grooves that Wyvern Lingo grew up on.

We’re not long into an interview – which ostensibly is happening to promote the band’s new record. But they don’t want to speak about that right now. When not caressing the piano, Cowley is involved in activism that advocates for refugee rights in Ireland. When I mention that my own father came to this country as a refugee in 1979, I’m not allowed get away from laying out half my family history.

Cowley’s interest – which includes work with organisations 10,000 Missing Children and Not on Our Watch – is crystallised on the single Out of My Hands. Performed from the perspective of a person who is indifferent to social activism, it was inspired by a person she spoke to at a homeless demonstration.

“I find that Irish people are generally very welcoming but can be quite apathetic if it’s not in front of their face,” says Cowley. “And the refugee crisis is one of those where I’ve seen the comments online and it’s outrageous, whereas most people when you talk to them are pretty good, and when it’s in their town they’re pretty good. They will step up.”

“We’re so saturated with images now. The opening line [of Out of My Hands] is a play on your Facebook feed: ‘My morning feed can’t take the gravity.’ I just can’t look at my phone and see another bomb. I do feel like sometimes people’s attitude is like, ‘Aw, I just don’t want to look at this right now.’”

“Don’t you feel like that?” Barry asks her bandmate.

“Absolutely,” Cowley responds. “You can’t wake up everyday and feel that level of energy. People who try to do things get really burned out as well. It can be tiring.”

“I do think we try to talk about the times,” adds Duane, who, in an interview setting anyway, seems like the quiet one of the group. “We’re very sincere in how we write in our lyrics. If they relate to somebody, great.”

Wyvern Lingo’s first album represents the next stop in their stylistic odyssey. The band’s 2014 debut EP, The Widow Knows, had more of a folk bent – all acoustic guitar strums, delicate fingerpicks and gentle violin sections. Yet tracks such as Fairytale had more of a Fiona Apple meets Floetry vibe. In these moments, you could tell there was an indie-soul group in there just waiting to be turned loose.

We’ve been building up to making this album for a while. When I imagined what I wanted Wyvern Lingo to sound like years ago, this is it. This is what it sounds like

“We were testing out loads of different things,” says Cowley, looking back. “If we knew a mate that played the violin [we’d say], ‘Yeah, let’s write a violin part.’ It was very organic at the start. We were testing and trying but not really looking at what we actually wanted to do. We were nowhere near figuring out what our sound wanted to be like.”

That’s optimum, though, right? A band working out their sound through rehearsing, live shows and recording, with all sonic experiments leading to album number one. The Widow Knows was followed by last year’s Letter to Willow, a four-song release that connects the dots between the band’s origins and this self-titled LP.

“We’ve been building up to making this album for a while,” says Cowley. “Anyone who has known about us for a while will think it’s long overdue. If we’d done it any earlier, it wouldn’t have been right. When I imagined what I wanted Wyvern Lingo to sound like years ago, this is it. This is what it sounds like.”

The album runs a broad thematic gamut. Take I Love You, Sadie, one of the singles. The track, as Barry describes it, is “a love song to the female qualities of a man” and “how attractive it is when someone isn’t held back in the way that they behave because of what’s expected of them and their gender”.

“It’s about me and my boyfriend,” Barry admits after struggling to define the song without admitting it’s heavily personalised. “And it’s about how he likes me because I’m a little bit boyish and I like him because he’s probably a little bit feminine. We just like that about each other. It’s just about that dynamic.”

I’m quite partial to Tell Him. Over a tragic, quiet-storm ballad for doomed lovers to sip over iced bourbon, Cowley’s open-book narrative of a fracturing human connection is delivered by a vocal that’s deep, rich and immaculate.

“Musically, we would have had a real D’Angelo vibe when it kicks in,” says Cowley. “That real ’90s R&B vibe. I actually wrote the very start of the first verse in the morning before band practice and I came down like, ‘I have this song’, and it was quite emotional. It’s a sincere moment. It’s about the pain of having to cut contact with somebody for everyone’s own good.”

It adds up to an album as narratively deep as it is musically chunky. How often does a new artist surface with a collection of tracks that would sound comfortable on a throwback cassette tape mix while still sounding fresh-to-death? The band are now gearing up for a tour of Ireland and Europe to further proliferate their clutch of retro-tinted new-age hits.

The interview is almost over now but Duane, mostly silent, gets the last and maybe most important word: “Pre-order the album.”

Subside: Featured on their second EP, Letter to Willow, and now dusted off for the album too, Subside boats a beastly rhythm section and a hook that ignites like wildfire as the band probe an ill-omened relationship.

Maybe It’s My Nature: Cowley tunes her voice to its lowest and meanest as though she’s about to unbreak Toni Braxton’s heart. Underneath, a prominent bassline leads the band through the suave, ornate beauty of this doomed ballad.