Sit back and let this indie wunderkind from Leesburg, Virginia do the driving. Plus: Tracks you have to hear from The Gloaming and Mix & Fairbanks 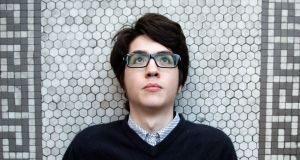 Who: Car Seat Headrest
What: Indie wunderkind
Where: Virginia, US
Why: It’s a long time since Jay-Z and Beyoncé were spotted at an indie-rock concert. That is to say that the cultural cachet of US indie rarely stretches beyond the confines of its own lanes. While its progenitors of the period – Grizzly Bear, The National, Bon Iver and Vampire Weekend – have established global fanbases, the next generation has had a tougher time standing out and has stuck to the margins, which has allowed for more wilfully distinctive music to thrive.

That may suit Will Toledo, whose idiosyncratic lo-fi rock music under the name Car Seat Headrest has been steadily and independently picking up fans, releasing 12 albums on DIY retailer Bandcamp before signing to Matador Records in 2015. 2016’s Teens of Denial album, with its sprawling, unconventional track structure and jutting dynamics that nodded to Pavement and Nirvana, landed him on many end-of-year lists.

At 25 years old, the Virginian songwriter has shrugged off any pressure that could have mounted and, rather than write a new album to capitalise on his critical acclaim, he has re-recorded Twin Fantasy, one of those albums originally released on Bandcamp in 2011. He explained to Rolling Stone: “the old one is by a different artist that I don’t necessarily like as much as the one I’ve turned into.”

Toledo isn’t afraid to burn bridges, but one listen to Twin Fantasy suggests that there’s an onslaught of fans coming his way. Just don’t expect to see Queen Bey at his shows, which include a Dublin date at Olympia Theatre, Dublin on May 16th.

There’s a plethora of Irish duos making music that mixes disco rhythms and sonics with a house sensibility, and they include Long Island Sound, Boots & Kats and Kildare duo Rob Smyth and Gary O’Reilly, who take their name from two cowboy actors of yore, Tom Mix and Douglas Fairbanks. The pair have been studiously and frequently releasing dancefloor edits of old disco tracks over the last two years, along with some sharply constructed originals. Notions is their latest and updates the French Touch sound that spawned Daft Punk with a sample that nods to the Irish usage of the song title.

The Gloaming – The Booley House

Since The Gloaming began their tradition of playing the National Concert Hall, it’s become a requirement that you must bring at least one living relative along with you, for family bonding reasons. But if you and your relatives are among the remaining handful left in the country not to attend such a show, an upcoming album of live recordings from the band’s gigs at the venue over the years will do nicely.