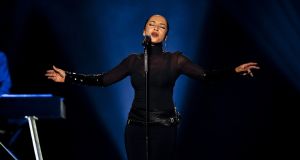 Pop singer Sade has recorded a new original song for the upcoming film adaptation of A Wrinkle in Time. Director Ava DuVernay announced the news on her Twitter account: “I never thought she’d say yes, but asked anyway. She was kind + giving. A goddess. We began a journey together that I’ll never forget.”

Titled Flower of the Universe, the song will be the first new music from Sade since her eponymous band’s 2010 album Soldier of Love, their sixth. The soundtrack to A Wrinkle in Time will also feature music from artists including DJ Khaled and Demi Lovato, Sia, Kehlani and Beyoncé proteges Chloe x Halle. Iranian-German composer Ramin Djawadi – best known for writing the score to Game of Thrones – will provide original composition.

I never thought she’d say yes, but asked anyway. She was kind + giving. A goddess. We began a journey together that I’ll never forget. Proud to announce that Sade has created an original song for WRINKLE IN TIME. It’s entitled “Flower of the Universe.” And it’s a dream come true. pic.twitter.com/FdXrZ1MFMO

Sade (59), was born Helen Folasade Adu in Ibadan, Nigeria. In 1983, she left the band Pride, in which she was a backing singer, to form her own band with guitarist and saxophone player Stuart Matthewman, keyboardist Andrew Hale, bassist Paul Denman and drummer Paul Anthony Cook.

Their debut single, Your Love Is King, was released in February 1984, followed by their debut album, Diamond Life, that July and hits includinf Smooth Operator. The album has been certified four times platinum. In the Queen’s 2017 birthday honours list, Sade was awarded a CBE for services to music.

A Wrinkle in Time is released on 9 March, and stars Oprah Winfrey, Reese Witherspoon, Mindy Kaling and Gugu Mbatha-Raw. DuVernay was announced as director of the film in February 2016, making her the first woman of colour to direct a live-action film with a production budget of more than $100m. – Guardian Service