‘If you want the sound of a nervous breakdown, what do you do?’ 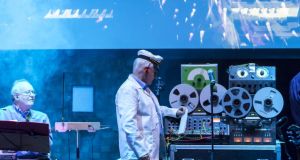 If this dilemma hasn’t cropped up much in your own career, it’s unlikely you were employed by the BBC’s Radiophonic Workshop. Begun 60 years ago, it is one of the planet’s most seminal breeding grounds of sound effects, brand new instruments, and entire genres of electronic music.

The group created everything from the Doctor Who theme to the sound-effect records so adored by Dougal in Father Ted. Their explorations into tape and synthesizer music inspired The Beatles and Pink Floyd, and arguably gave rise to the UK’s flourishing electronic music scene, for which reason Mixmag cited them as “the unsung heroes of British electronica”.

Not that they felt particularly heroic when they were first formed.

“The workshop was set up as a radio department,” says Dick Mills, one of the group’s founder members. “I joined the BBC in 1956 after I finished my national service, back when all effects for radio plays were inserted in live using pre-recorded gramophone records.

“Every studio had about eight gramophone records, and the engineer raced around playing them all in turn. If you had a scene that was longer than two minutes, you’d need two copies and go from one to the other. It was a lot of leg work.”

Now 82 years old, Mills is still infectiously enthusiastic about every aspect of the craft, delighting in recalling every little trick and technique you can ask for.

“We started using tape recorders instead, and discovered that it gave us a feedback effect, making the actor sound a bit spooky. Someone said “ooh, that’s good – when we do a ghost scene, we could use that!”

“People quickly realised it wasn’t just a preservative medium,” says Ayres. “It was highly creative. You could speed it up, slow it down, reverse it, stretch it, overdub, echo. All of this creative sound work became possible because of tape.”

The boffins were entranced, intoxicated with the power of their new tools, and the power it gave them to make increasingly weird and wonderful sounds. Eventually, the BBC got all the enthusiasts together and shipped them to their iconic headquarters in Maida Vale. This detachment, far away from BBC HQ, was primarily so they’d have sufficient space for their giant tape machines, but it had other benefits.

“There were no managers stalking the corridors,” says Ayres, “no one poking their heads in to see if they were earning their keep. So they were able to get away with doing stuff on their own terms.” It also didn’t hurt they got the keys to the storage department, meaning they got everyone else’s discarded and broken gear, to add to their already-growing retinue of bespoke noise-making devices.

“There was a guy who took apart a piano that he’d gotten from his tennis club,” remembers Mills with the sort of winsome delight others might recall a holiday romance. “Eventually, it was just strings on an iron frame. You could twang them, scrape them or – better still – lay it down and chuck ping pongs ball at it. It was marvellous. If you recorded that and played it back to a producer, they’d say ‘that’s way out, man!’”

Rubbing a set of house keys against the exposed strings of this contraption created one cosmic sound effect still heard on millions of TV sets 60 years later; the weird, otherworldly engine noise of Doctor Who’s Tardis.

“Doctor WHO came along, and the rest was history,” recalls Mills of the landmark sci-fi institution, whose famous theme he helped compose.

“We put that theme together from Ron Grainer’s original manuscript in about two weeks maximum. No musical instruments at all; just oscillators and twanging and banging and that sort of thing.”

The partner he’s referring to is Delia Derbyshire, arguably the workshop’s most famous member, and a trailblazing figure in electronic music. Both she and founder member Daphne Oram hold a particular significance for their position as women at the epicentre of British electronic music, an industry still lamented as a boys’ club to this day.

Derbyshire, most famously associated with Doctor Who’s astonishing theme music, joined the workshop in 1960, and would work on hundreds of commissions for them and others while there.

Daphne Oram’s time at the workshop was rather more short-lived, however.

“Daphne wanted the workshop to be a place where they could research sound design and create electronic music,” says Mills of his former colleague, “whereas the BBC just wanted a sound-effects factory.”

Oram was looking to the electronic music laboratories being set up on the continent, and the growing movement for its appreciating as art.

“In France, they were doing musique concrete, found sound, collage art,” says Ayres. “In Cologne, they were exploring purely electronic sounds through tape. But in the UK and everywhere else, the idea that electronic music was even music was anathema.”

In some cases, this was literally the case. When the groundbreaking electronic score for 1956 sci-fi classic Forbidden Planet was given a mention in its opening titles, its composers were given the rather mouth-bending credit “Electronic Tonalities by Louis and Bebe Barron”, rather than allow their contributions to be labelled “music” at all.

Facing pressure to compromise her art, Oram left the workshop to pursue her own idea of the craft, just a few weeks into its formation.

“It saddens me that Oram left,” says Ayres. “If she’d just held on, a few years later, throughout the sixties, people realised that this was music. Even the Beatles were using the same techniques on Sergeant Pepper”.

With the spirit of these forebears in mind, Ayres is hopeful that future generations might find a path to electronic music as an artform, as he did.

“We’re trustees of a charity named Delia Derbyshire Day, which is purely about outreach work. We want to encourage young people, particularly school-age young women, to take an interest in electronic music.”

Ayres was himself one of those kids entranced by the workshop’s work as a child, one who ended up working with them as an adult. “I met Dick at a Doctor Who convention. I’d done music for plays in school and that kind of thing, but he showed me around the workshop and I’d realised that this was a life for people. At the end of the 1980s I was commissioned to do music for Doctor Who as a freelance composer, so I was working with him after that.”

Then, when the unit was later disbanded, Ayres was given the task of going through acres of their old material.

“I was asked to go in and look at the archives, because it was about to go in a skip. Then, in the early 2000s we were asked to do a concert and we enjoyed it. We’re still enjoying it and we’re not dead yet, so that’s why we still do concerts.”

The live shows have also never lost their appeal. “Even though we’re up to our eyes in digital formats and synthesizers” says Mills, “people still want to know how the hell we did it!

“There will be a time when we leave this earthly plane,” says Ayres. “We want to leave something behind. We want more people making more sounds out of more weird stuff.”

Doctor’s Notes: The Story Behind The Greatest Theme Of All Time

What can be said about this piece of music that hasn’t already been said about custard or nationalised healthcare? Put simply, the Doctor Who theme isn’t just the Radiophonic Workshop’s crowning glory, it may well be one of Britain’s greatest contributions to the world. As thrilling and odd as it sounds now, one wonders just how unaccountably wondrous it must have been in 1963; that pulsing bass, those cosmic trills, creeping into the nation’s sitting rooms like some alien emissary from an unimaginable future, at a time when one fifth of British households hadn’t yet an indoor toilet.

The music itself was put down by Ron Grainer, who composed it on paper and handed it to Delia Derbyshire to adapt, with Dick Mills as her technical assistant. Without using a single traditional “instrument”, they converted Grainer’s piece into the spectacular work we know today, by cutting tape recordings of plucked strings looped over and over in bafflingly labyrinthine sequences. The “bubbles” and “cloud” effects were generated by doing the same for white noise. Grainer, astonished upon hearing the near unrecognisable music Derbyshire turned in, is said to have asked with confused awe, “Did I write this?” “Most of it,” replied Derbyshire, with a little too much modesty.

Unfortunately, this modesty prefigured the official undervaluing of her work, and the BBC denied Derbyshire a proper attribution for her work for decades, citing Grainer as its sole composer. Despite his strenuous attempts to get her listed as a co-writer, she didn’t got an on-screen credit until 2013 when, after 50 years of blowing minds, the BBC finally recognised just who made Who.

Ellie Goulding: ‘I was made to feel like a sexual object’
7

The power of literature in a time of plague
9