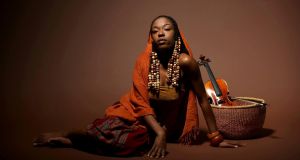 What: Electrifying experimental violinist
Where: USA
Why: Brittney Denise Parks is an LA-based musician, producer and singer who has cultivated her own sonic landscape that delightfully falls between the cracks of classical, experimental, R&B, pop and folk.

The violin is this polymath’s primary instrument and she takes her autodidactic inspiration for how she plays the stringed instrument from Sudanese fiddle music. The style imbues her modern songs with an ancient wisdom and reaches into the past to show her present. Her enigmatic project name is clearly well-chosen.

Parks released her debut EP on the ultra-cool hip-hop, soul and R&B label Stones Throw and of the seven tracks she’s released into the word so far, the majority are stunning in their resonance.

Come Meh Way was her introduction – a song built on a beguiling violin line and handclap percussion, that draws a line between African folk and zeitgeist-friendly R&B. Newest track Water goes on a more avant-garde and fuzzy rhythmic route while on Oatmeal, she uses her chosen instrument for a discombobulated looped melody that sounds like it’s tripping over itself with lyrics that read like homespun folk lines: “Bake up, when I wake up, make you oatmeal, hope you stay.”

Sudan Archives is currently touring with Merrill Garbus, aka Tune-Yards, another American musician who has found in kinship in loopstations and the exalted music of Kenyan folk and Congolese pop.

Cian Sweeney is a freelance musician, pianist and producer who has recently worked with The RTÉ Concert Orchestra and Phil Coulter. Last year, he kicked off his 1000 Beasts project with a modus operandi of featuring different singers on each release. His first track of 2018 calls on Janet Grogan, a former contestant on The Voice, for a confident slice of Irish electronic pop. Listen here

You have to hear this... Young Fathers – In My View

The Scottish trio haven’t let the curse of the Mercury Prize winner fall upon them. They were blind to the critics from the offset, operating as a gang who were more interested in offering genuine healing through music that crosses rap, gospel and lo-fi sonics. In My View is another idiosyncratic uplifting gem from these outliers. Their new album Cocoa Sugar is out in March. Listen here