New Artist of the Week: Half Waif 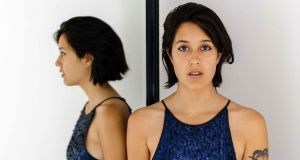 Half Waif: she wants her album to be a “totem for healing and a nudge of encouragement to be alive”

What Thread-pulling singer-songwriter.
Where Massachusetts, US.
Why Half Waif, aka Nandi Rose Plunkett, is the daughter of an Indian-refugee mother and an American father of Irish-Swiss descent – a background that the Massachusetts musician says has often made her search for a sense of home.

The artist’s new album, Lavender, due in April, takes its title from the plant that her 95-year-old grandmother would boil in her English home; the album is largely inspired by witnessing her relative’s life draw to a peaceful close.

“It is an elegy to time, the pilgrimages we take, and the ultimate slow plod towards our end,” Plunkett says. “It is an examination of the way we fracture, inside ourselves and inside our relationships – the fissures that creep along the structures we build, the tendency towards disintegration.”

In doing so, Plunkett says, the album is a talisman to ward off the feeling of decay, a totem for healing and a nudge of encouragement to be alive.

The album’s first single, Keep It Out, has a slow-burning atmosphere inspired, like her own background, by music of disparate sources – specifically, Celtic singing and “sad chord changes” of music from the 19th century.

Fever Ray: Wanna Sip
Karin Dreijer spends much of Plunge, the Swedish artist’s first album in eight years, exploring love in its personal and political forms and the decisions and feelings around plunging into it. On the dystopian electro centrepiece of the album, My Country, Dreijer wrestles with finding a place for a gender-neutral artist who values self-expression in a heteronormative society. The chorus of “this country makes it hard to f**k” is at once a rallying cry and a claustrophobic plea. Fever Ray plays the Body&Soul festival this summer, also curating the festival’s Friday lineup. Listen here.

AE Mak: Glow
AE Mak began as the duo of Ellie McMahon and Aoife McCann; together they cultivated a harmonic-driven art-pop project that suggested more ambition to come. McMahon has since left the project, leaving McCann to channel a new vision with Daniel McIntyre, Dylan Povey and Peter Kelly. Glow, the first song from the project since then, is a song born of an argument with a friend. McCann channels that frustration into a dynamic electronic-pop gem that paves a way forward for the AE Mak project. Listen here.

Careless whispers: how the German public used and abused the Gestapo
3

Mild-mannered he may be, but Matt Cooper will go 10 rounds with anyone
10

How to Learn Irish in Seventeen Steps, by Roisín O’Donnell
Real news has value SUBSCRIBE