Plus songs you have to hear from Geowulf and Pillow Queens 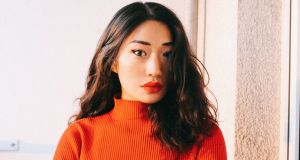 Peggy Gou: the Korean-born, Berlin-based artist has spent much of her time DJing in clubs around the world, quietly growing her reputation in the flesh and through a series of mixes

What: Producer and DJ gaining a foothold
Where: Korea via Berlin
Why: At Glastonbury Festival last summer, Peggy Gou looked up from the decks while DJing to see a crowd of people in front of her chanting “Peggy Shoe” and holding their footwear aloft in her honour and possibly, Buddy Holly’s too.

That’s festival shenanigans certainly but it’s a demonstration of Gou’s current status that the gesture has followed her all over the world since.

Gou first made waves as a producer with her track Gou Talk, which melds a beating-heart rhythm with twisting synth lines and mechanical percussion to create a standout track of 2016.

Since then, the Korean-born, Berlin-based artist has spent much of her time DJing in clubs around the world, quietly growing her reputation in the flesh and through a series of mixes for dance music portals like Resident Advisor, FACT and Stamp The Wax.

A recording of her set at the Amsterdam dance festival Dekmantel is evidence of her eclectic style as a DJ, moving from acid to techno to space electro to disco-funk with ease, keeping the dancefloor guessing while satisfying the throng in the open-air and watching online from home.

This year, Gou is focusing on her own material and a new EP out in March on the Ninja Tune label is already turning heads with a track called It Makes You Forget (Itgehane). It’s a tonic for the cold days and nights that brings to mind a tropical sojourn to come with its air-filled rhythm, Korean vocals and brightly-coloured melodies. 2018 is Gou’s for the taking. Shoes off please.

You have to hear this... Pillow Queens - Favourite
Sarah Corcoran, Pamela Connolly, Cathy McGuinness and Rachel Lyons are a fast-rising Dublin foursome who trade in indie and slacker-pop. Favourite is the lead track from their forthcoming EP State Of The State on Bristol label Specialist Subject and it has old-school rock charm with influences apparently drawn from the likes of Yuck and Weezer among others.

You have to hear this... Geowulf - Sunday
The Velvet Underground’s woozy Sunday Morning perfectly encapsulates the morning after the night before but it’s also an effective cocoon to ease the thoughts of whatever week lies ahead. The Australian duo Geowulf take a similar tack with their dreamy guitar pop song that practically begs you to stay in bed.

The war against women
9