‘Powder Her Face’, New Music Festival: the best in opera and classical music this week 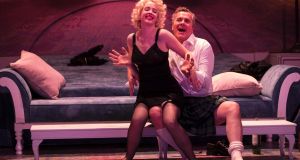 Powder Her Face launched the opera career of the 24-year old Thomas Adès in 1995. The libretto by Philip Hensher is based on the scandalous life of the Duchess of Argyll and features what has been described as “the world’s most notoriously explicit aria”. Google “headless man”  and you’ll see how, decades after her death, the duchess is still generating headlines. Adès’s super-clever music hops with delight through 20th-century styles both popular and high-brow, and is a model of imaginative scoring for an ensemble of just 15 players. Irish National Opera’s production by Antony McDonald, already much praised when seen in Belfast, features Mary Plazas as the duchess. The other cast members including Daire Halpin, Adrian Dwyer and Stephen Richardson, cover a large bundle of roles. Timothy Redmond conducts, and he will do a pre-performance interview with the composer before the performance in Tralee on Friday, March 9th.

If you’re a classical music-lover with fairly standard tastes you’ll probably not know very much about musical life in 18th-century Ireland beyond the fact that Handel’s Messiah was premiered in Dublin in 1742. Peter Whelan, the new artistic director of the Irish Baroque Orchestra, wants to change that. His first concert in his new role is focusing on virtuoso violinists in 18th-century Dublin – the great Italian master Francesco Geminiani, his student Matthew Dubourg and a young Irish prodigy, Jackie Clegg. Geminiani and Dubourg feature as composers in a line-up that also includes Pasquali, Corelli, Viner, Bocchi, Castrucci, Handel and Vivaldi.

NCH and other Dublin spaces, until Sunday. newmusicdublin.ie The 2018 New Music Dublin festival is the largest ever. It starts with Crash Ensemble giving the first performances of Gráinne Mulvey’s e-Greeting on the steps of the National Concert Hall at sunset (6.03pm) and ends on Sunday at 9pm in the NCH Studio with Crash and guest musicians in Louis Andriessen’s confrontational 1975 noise-fest, Worker’s Union (“for any loud-sounding group of instruments”). The big presence, as composer and conductor, is Scotland’s James MacMillan, and there are also major works by Deirdre Gribbin, Unsuk Chin, Kevin Volans, Karlheinz Stockhausen, Donnacha Dennehy, Gérard Grisey and David Fennessy. The genre-crossing programme also includes films, talks and walking tours. Festival curator and chief executive John Harris says, “New Music Dublin is all about escaping boundaries, whether boundaries set by musical genres, or boundaries set by bricks and mortar, or the boundaries of our own musical expectations.”

Milkman by Anna Burns: putting Ardoyne on the literary map
2

Domhnall Gleeson, locked down in Dublin: ‘Oh s**t, this is embarrassing’
6