John Godfrey: pushing boundaries at the extreme ends of the musical spectrum 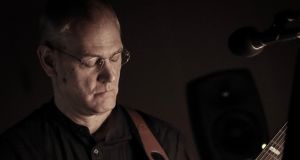 John Godfrey: “So, really, the primary, core thinking behind quiet music is that this is a music you choose to engage with, and if you don’t want to it’s not going to shout at you.”

John Godfrey arrived at the University of York as what he calls “a very strait-laced classical musician”.

Wilfrid Mellers was still in charge of the music department, and Richard Orton, who had founded the university’s electronic music studio in 1968, was Godfrey’s main composition teacher.

It was, says Godfrey, a “very mixed” environment, and when he arrived there he was “incredibly conservative”.

“For me, at school, Khachaturian – composer of the incredibly popular Sabre Dance – was a step too far. Stockhausen was the guy I loved to hate.”

He was, however, interested in early music, and was a harpsichordist.

So how did he get corrupted?

“Weird friends. I had friends at school who were into some very weird music. So alongside the very conventional classical music I was interested in quite avant-garde pop and rock. Groups like The Residents, the far-flung ends of punk and post-punk. There were some very strange forms of dance music around at that time. And the hard-core end of groups like The Stranglers. But mainly The Residents.”

The Residents are notorious for hiding their identities, appearing with large eyeball masks over the heads, or bandaged as mummies.

“One of the interesting rumours was that they were influenced by Harry Partch, and had actually studied with him.”

Partch was such an individualist that he devised his own musical scales and invented instruments on which they could be played. He lived the life of a hobo during the Great Depression, and once listed some of his influences as “Yaqui Indians, Chinese lullabies, Hebrew chants for the dead, Christian hymns, Congo puberty rites, Chinese music halls (San Francisco), lumber yards, and junk shops”.

There are, says Godfrey, some things in the work of The Residents, which are “so like Harry Partch’s music” – he instances Six Things to a Cycle, the longest track from the 1977 album Fingerprince.

“So there you were with my love for Bach and Beethoven, and The Residents, side by side. I think the corruption really happened there, and it moved across to art-music while I was studying for my degree.”

One of the keys to the shift was the discovery that he really loved performing new music.

“I really started to enjoy sonorities, and got over the whole issue of dissonance. I realised that dissonance isn’t an issue at all.”

The upshot was the group Icebreaker, which Godfrey founded with James Poke in 1989. Icebreaker, still going strong, with a Brian Eno gig at the National Concert Hall as recently as last month, “grew out of the discontentment of a number of students with the new music scene as it was in Britain at that time. For figures like composer George Benjamin the buzz word was subtlety. The whole thing was about being very fine and delicate and understated. Terribly British. We wanted a music that expressed itself very forcefully.”

The influences were American minimalism and the work of Dutch composer Louis Andriessen, which “seemed to be the music we had been looking for, especially for its referencing of rock and jazz. That spoke a great deal to the need for an accessible contemporary music which a lot of people felt at that time”.

The simple matter of performing Louis Andriessen was what led to the formation of Icebreaker. For Godfrey, “the idea really just grew out of the zeitgeist. It just needed somebody to take hold of it”.

Godfrey, who has long since parted ways with Icebreaker, has been with another amplified, rock-influence ensemble, Ireland’s Crash Ensemble, since its inception in 1997. But his own ensemble, which he founded in 2008, is at the opposite end of the dynamic spectrum.

The Quiet Music Ensemble, which was launched at a Quiet Music Festival in Cork, where Godfrey is a lecturer in UCC, is exactly the kind of ensemble that its name suggests.

Part of the background to the ensemble is the world of Icebreaker and rock music.

“When I founded Icebreaker I was very young. That’s a really important point. It is a young person’s music. I’m not afraid to say that. It has the kind of energy and enthusiasm that you need from a rock concert. The volume is about a sensuous pleasure of being immersed in this enormous sound.

I tell him of my own first experience of Icebreaker at the Sonorities Festival in Belfast. The played a number of concerts, and after the first I went out and bought earplugs.

“If you’re buying yourself earplugs,” he says, “one wonders what is being communicated to you in that interaction.

“Loud music is a very interesting and complex subject. In the case of a rock concert the volume is a quintessential part of the experience. Rock music without volume doesn’t quite work. You also have other musics, like Phill Niblock’s, which require volume in order to create certain psychoacoustic and even physical acoustic effects. That’s fine.”

In the same year that Godfrey founded the Quiet Music Ensemble, Crash Ensemble took over the Temple Bar Gallery for a two-and-a-half hour immersion in Niblock’s world of steady-state sound and video.

“But,” explains Godfrey, “to a very large extent I began to find so much music attempting to force an opinion on you. Sometimes it can feel like you’re being hectored. This is not just a pop and rock thing. I began to notice that in fact the idea of being forceful was such an integral part of the musical environment in which we live in the West, that we are unaware of what we’re doing. Even classical musicians are forceful.

“I remember talking to a cellist one time about this intense training she’d had, to produce what she called ‘power vibrato’. It was a very particular technique that allows you to sound even louder and even bigger and all the rest of it. We look at our history, and what has essentially been happening is that things have been ballooning in size, in volume, and in the aggressiveness by which they grab your attention.”

Philosophically, he says, this started to worry him.

“I started to think about the idea, really, that art might not be something that is attempting to communicate to you by shouting at you, or even that it’s communicating at all. But that art might be an opportunity to engage in a conversation, in a negotiation of understanding, which is invitational, not forceful.

“So, really, the primary, core thinking behind quiet music is that this is a music you choose to engage with, and if you don’t want to it’s not going to shout at you. You’re not going to be any more interested if it did shout. And the thing about extreme quietness, as most good rhetorical speakers know, is that you can call somebody’s attention in with it. And if they are willing to give themselves to the process, then somebody can be brought into a very particular state of attention by employing that kind of quietness.”

Invitational is a word that crops up again and again as Godfrey talks about quiet music. And though it might seem counterintuitive at first, part of the spur towards quietness came from Crash Ensemble, whose founding artistic director, Donnacha Dennehy, has a strong interest in the explorations of timbre of the French spectralist school.

Another influence was the “very, very interesting sound-art and improvisation scene in Cork, which has been going on an awfully long time, and most people still don’t realise it’s going on. But it is one of the most interesting things that’s happening in this country, and has been for 30 years. There is a very sonority-focused, gentle exploration of sound. That really started to get under my skin. That is how the quiet music aesthetic started to develop.”

Not all of the scores that the Quiet Music Ensemble performs are conventionally notated. And improvisation plays an important role, too.

But Godfrey is adamant that any score, whether it’s Bach or Beethoven or Gerald Barry, has what he calls an invitational component – “take this that I’m giving you, and shape it. The interpreter of Beethoven is not playing exactly what’s on the page. He’s taking what Beethoven has given, shaping it in particular ways that are also shaped by the tradition of interpretation. There is an interaction and a negotiation between score, interpreter and listener. And none of this could work if any of those were missing.”

The Quiet Music Ensemble’s Deep Listening Sunday’s programme at Kilkenny Arts Festival is at the Parade Tower of Kilkenny Castle from 2pm to 5pm on Sunday, August 18th. The free event will include world premieres of works by Marianthi Papalexandri-Alexandri and Heather Frasch. kilkennyarts.ie