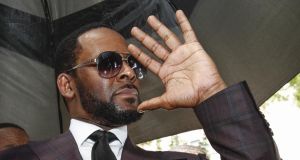 R Kelly offered an underage autograph seeker $200 to take off her clothes and dance with him in his hotel room, then touched her sexually, according to officials who announced new sexual-misconduct charges against the singer on Monday.

The 52-year-old, who already faces sexual-assault, child-pornography and obstruction-of-justice charges in Illinois and New York, was charged in Minneapolis with two counts of engaging in prostitution with a minor, said Mike Freeman, the Hennepin County attorney, at a news conference.

At a promotional event in the city in 2001, the girl, who was 17, approached Kelly for his autograph, Freeman said. When he handed it back to her she saw that next to his name was a phone number. She called, and was invited to his hotel, where a member of his staff escorted her to Kelly’s suite.

He then offered her $200 to dance for him, Freeman said. She accepted. According to the criminal complaint, the girl, who is now a woman in her mid-30s, told investigators this year that Kelly helped remove her clothing, then took off his own clothes, and they danced.

Re: New charges @RKelly give me a break. This is beyond absurd

She said Kelly lay on the bed and that she climbed on top of him. Kelly then touched her all over her body, including her vagina and breasts, she told investigators. Kelly also offered the girl free VIP seating at his concert, which was restricted to adults.

In January the woman contacted a tip line that had been set up after the airing of Surviving R Kelly, a TV documentary about the singer’s treatment of women. In bringing the charges, investigators interviewed the girl and her brother, who Freeman said had become suspicious when he saw that his sister had a front-row view of Kelly’s concert. Freeman said both were embarrassed about the incident at the time and were not willing to come forward until the outpouring of allegations against Kelly this year.

Through years of allegations and rumours, and even a previous trial on charges of child pornography – he was acquitted on all counts in 2008 when the girl and her parents refused to testify – Kelly, whose full name is Robert S Kelly, seemed largely impervious to prosecution. But since January, when Surviving R Kelly aired, the accusations appear to have caught up to him.

In February he was charged with sexual abuse of four women, three of whom were underage at the time. Then, last month, he was indicted on federal charges in Brooklyn and Chicago, on counts including producing child pornography and conspiracy to obstruct justice. Crucially, the girl at the centre of his 2008 trial, who refused to testify then, is now co-operating with federal investigators.

“Some might say, ‘Aren’t you piling on?’” Freeman said at the news conference. “He’s got federal charges in New York, he’s got state charges in Cook County,” he said, “Well, frankly, Minnesota victims deserve their day in court.”

Kelly’s lawyer, Steve Greenberg, dismissed the new charges on Monday. “Re: New charges @RKelly give me a break,” he wrote on Twitter. “This is beyond absurd.” Last week another lawyer for Kelly characterised the accusations as “groupie remorse”.

Freeman, the county attorney, said that after the two met in the hotel room, the girl called the phone number R Kelly gave to her again and spoke with him briefly. Eventually the phone number was changed. That was the extent of their contact, Freeman said. – New York Times