All Together Now festival: ‘It took us two hours to cover 2km’ 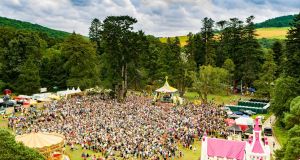 Sunday brunch time saw a special live recording of The Blindboy Podcast at All Together Now. Photograph: Aerial.ie

Back and bigger than before, Waterford’s All Together Now made its return for a second year, with most concert-goers losing up to half a day to traffic no matter which part of the country they were travelling from.

“How long did it take you?” is the most asked question in queues for bars, toilets and food, with someone offering a horror story worse than the last.

“It took us two hours to cover 2km,” offered one traffic survivor, hoping to win the title of The Worst Journey, but a nine-hour commute from Dublin takes the biscuit for officially being The Worst.

Electro synth dreamboats Ships made it on site just in time for their set, powering through a speedy soundcheck, to deliver a perfect set that ironically finished with a cover of Prince’s Controversy.

When people finally decompressed after their sweat-filled drive, hair was let down and cans were cracked open. Catered for the over 21s, conversations of mortgages and poké bowls filtered through the campsites as the under 12s, who got in for free, in their oversized protective headphones pleaded with their parents for a go on the ferris wheel in exchange for sitting through Neneh Cherry’s practically religious set.

“She’s Mabel’s mam, don’t you know,” they said, hoping to provide some context for the Buffalo Stance legend.

Once conversations around travel woes were finally exhausted, the sprawling grounds of Curraghmore Estate, decorated with 10-foot tall tulips and giant installations of three-eyed stags, become a playground for the 22, 500 people in attendance.

Increasing in capacity from last year’s 15,000, the festival site had a rejig to accommodate more people without compromising on intimacy or magic.

Expanding the woodlands, which offered interactive entertainment in the shape of old tellies playing videos of ant colonies, they also moved the majority of food stalls away from the house’s lawns, which was last year’s main hub of activity. Now it’s home to the kids’ area, Kids Together, and All Curious Minds conversation tent, where queer alt-rock darling John Grant gave us valuable life lessons chatting to Panti Bliss, and Icelandic composer Ólafur Arnalds praised the casual chaos that goes with performing in Ireland.

The festival’s ethos puts a huge emphasis on sustainability, and thanks to light-hearted but insistent reminders on social media to think green, people came prepared with KeepCups for coffee and decanted booze from glass bottles into reusable flasks, with people actually dividing their waste into the right bins.

The fire-spitting Arcadia Soundsystem stage is the manic Mad Max-inspired centrepiece for the otherwise very wholesome and eco-driven festival.

With a heavy Garda presence all weekend, the only reported trouble-makers on site were wasps, who were out in force after their nest was disturbed during the site build. However, Saturday afternoon’s relentless rain put a stop to their messing but it didn’t put a stop to anyone enjoying Father John Misty’s particularly Misty performance on the main stage or joining Sing Along Social’s devoted congregation at the Belonging Bandstand.

The creation of the late John Reynolds, who died last October, All Together Now is the next step for people who have outgrown Electric Picnic, and by booking in acts like Jon Hopkins, Anna Calvi and the show-stealing Loyle Carner, that would normally fill middle-sized music venues, there’s a less frantic but more considered approach to enjoying live music.

Still very much in its formative stages, All Together Now is reshaping what Irish audiences should expect from their festival – quality food, music and entertainment for niche audiences while creating a sustainable and environmentally sensitive set-up . Yet it’s not without its growing pains.