PrettyMuch: ‘Call us a boyband, but don’t call us One Direction’

Simon Cowell’s latest signings are five US-Canadian ‘creatives’ who tick all the right boxes for global pop success. With such heavyweight backing, they may be too big to fail 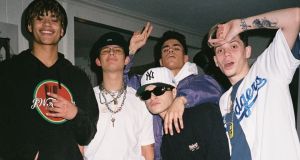 PrettyMuch: ‘We fit the mould of a boyband, but we’re a collective of creators who like to create’

I hear them before I see them. Behind the gates in an old stableyard in a part of London best described as leafy suburb, Simon Cowell’s latest discovery PrettyMuch – or PRETTYMUCH as they prefer – are practising the most energetic part of their recent single Phases, as if they’d timed my entrance exactly. Their eyes follow a wall of mirrors set up along one side, as they dip, slide, turn and one-two at lightning-fast speed, whooping and hollering like it’s the finale part of a Zumba class, only cooler.

The group – Brandon Arreaga, Austin Porter, Nick Mara, Edwin Honoret and Zion Kuwonu, all between 19 and 21, from various parts of the US and Canada – are already building a following of loyal fans (known as “‘Beanz”) across the pond. But today, they’re rehearsing for their first-ever London live show, taking place at the Scala the next day. It comes after their introduction to the UK market as musical guests in the final of The X Factor in 2017, an opening gambit that said more about the support behind them than their audience-pulling power.

The fivesome were discovered and assembled by Cowell in 2016, signed to his label Syco Music, and are managed by ex-Syco president Sonny Takhar. Alongside Takhar’s business-as-usual things such as, oh, just managing Westlife’s stadium-sized return to the road, he tactically left Syco to set up Kyn Entertainment, a joint venture with Live Nation to nurture new acts. PrettyMuch are Kyn’s first signings, so one gets the impression, even before their first European show, that they’re already too big to fail.

At face value, you look at us and think ‘these guys can never ever be friends’, but when you get to know us, you’ll see that the energy is really like that

Not that you’d find complacency in the group, as they concern themselves about the running order of their songs and the sending of correct backing tracks for the night. Arreaga tries to AirDrop the right stems to the sound engineer while the others – dressed in various states of vest/jogging bottoms/trainer combos – kill time individually by going over moves or trying out tricks with the microphone and the mic stands. All this, and it was meant to be their day off, they explain in their supposed break.

“I swear to God, my feet are literally bleeding,” says Kuwonu, pointing at them hidden in their shoes.

“But that’s what it takes,” adds Mara. “There’s a reason hard work is called hard work, because if it was easy, everyone would do it. There’s only so many people willing to do it.”

Endearingly, their enthusiasm makes me recall Bros’s documentary After the Screaming Stops, with their unearned gravitas and mixed metaphors. They’ve yet to master the radio-friendly art of not all talking over each other too; the others have an opinion on their work ethic too, but they’re lost in a tsunami of agreements. Eventually, Arreaga’s point comes forth.

“The young generation is becoming so strong and empowered, and I wish that I would have had something like us around when I was growing up: a squad of creators who are hungry,” he says. “I feel like we’re setting an example for people. I want to encourage everyone. Like if you want to produce, yo, produce. Like, I want to put out a sample pack for producers, with different sounds.”

Arreaga seems like the leader of the group, not least because he’s ready with their mission statement and a producers’ sample pack. But ask what their roles are in the band, and it transpires there’s no one dynamic.

“We used to say that Edwin was like our dad of the group – he’d make sure we were all up and got the car at the right time. But that swaps out, so sometimes Nick does that,” says Porter.

“The dynamic is constantly changing and we all just fall in line. It’s rare to get that,” adds Mara. “At face value, you look at us and think ‘these guys can never ever be friends’, but when you get to know us, you’ll see that the energy is really like that.”

It’s certainly true that they don’t look like a natural fivesome. Arreaga might seem too bookish to hang out with Kuwonu, the cool customer of the group. Porter, meanwhile, seems like he would have been a grunge drummer if he were born 30 years earlier, while Honoret is the observer of the group – softly spoken and ready with some useful insights. Mara is the only one that’s too overshadowed to get a measure of, though it’s he who tries to explain their unlikely friendship.

“We all relate to music, but at the same time we relate to different things, like I’m from New Jersey and Edwin is from New York, so we can relate in that way,” he says. “Austin can relate to Edwin on anime, and Zion and me on video games. It’s all different.”

On March 18th, 2016 (a date the group marked with matching tattoos), they took up residence together in LA, in something of a luxury incubator. It’s here they began drip-feeding their singles.

First came Would You Mind, a Backstreet Boys-esque introduction to the group, though their R&B-tinged releases since – such as Hello and Blind – uncover why they cite Boyz2Men, Bell Biv DeVoe and Michael Jackson as their primary influences.

It begs the question of whether they are, as many have heralded so far, the next One Direction. Certainly, since the 1D posters came down, there have been no other strong contenders for reusing the Blu Tack.

Ask them if they’re comfortable with being called a boyband at least, and they partly concede. “We fit the mould of a boyband, but we’re a collective of creators who like to create,” says Kuwonu.

If you dwell on negative energy, in any sense, and let it be a thought in your head, then it’s going to happen

Their enthusiasm for creativity partly overlooks the world-class writers that also work on their material (Ed Sheeran identifiably wrote Summer on You, the revered Savan Kotecha helped on Open Arms, and One Direction’s writer Julian Bunetta is also in their credits), but, with their street sound and fresh beats (as the kids say), one should take the 1D comparisons with a pinch of salt.

“I think when people say we’re One Direction, they’re not talking about the exact band,” says Porter. “They’re just talking about a boyband who took over the world, and people want to know who will be the next boyband to take over the world. We’re obviously not going to be the same . . .”

To help them achieve One Direction’s success, their shared mentor Simon Cowell is very much present.

“It’s like he bought us a big boat to go across the world with, and he lets us drive but just FaceTimes us when we’re on the boat,” explains Porter. “And we get to spraypaint it, customise it . . . the boat is ours.”

Are there any other acts whose careers they’d like to emulate?

“No, not really. If anything, we want people to look at us, we want to be setting the example,” says Arreaga. Everyone expresses their agreement cacophonously, until Mara cuts through.

“That said, I did watch the Backstreet Boys’ Netflix documentary [Show ’Em What You’re Made Of], and what I liked about them over any group that I’ve seen is that they’ve been together since they were 16, and they’re 40-something now, and in the movie you can still see they’re still a family,” he says. “It wasn’t always about the dancing and the performing, it was about them loving each other, so that’s something we’d like to embody as well.”

If they’re in it for the long term, I wonder if, at this career-plotting time, they’ve discussed the right time to call it a day. But, for a band so determined and dreaming big, it’s not a question to consider. Or, as Kuwonu puts it: “I’m in a good space right now and I don’t want to reflect on what could go wrong. F*** that.”

Mara steps in: “If you dwell on negative energy, in any sense, and let it be a thought in your head, then it’s going to happen. So I try to keep positive thoughts in my head and I think that will help manifest a better life.”

As they tumble back to the dance floor and back to the better life they’ve already created for themselves, it’s exciting times in camp PrettyMuch. There’s no Irish visit planned as yet, and no album release date on the horizon, but with PrettyMuch’s first European concert deemed a success the next day, consider them open for business.