Grammy-winning R&B singer R. Kelly denies sexual abuse charges against him and broke into tears while saying he was fighting for his life, according to interview excerpts released by CBS television. Video: CBS/Reuters 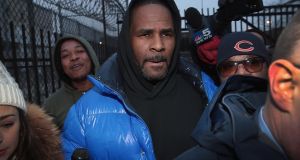 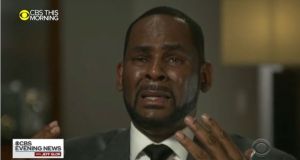 R Kelly: “I didn’t do this stuff, this is not me,” in interview with CBS News’ Gayle King. Photograph: CBS

The allegations that he has sexually, emotionally, and physically abused women and girls for decades are “stupid”, “not true”, and “not fair”, singer R Kelly said in clips from an emotional new interview with CBS News’ Gayle King.

“I didn’t do this stuff, this is not me, I’m fighting for my f*cking life,” the singer said, his voice cracking, apparently on the edge of tears.

The CBS This Morning interview comes less than two weeks after Kelly was released on $100,000 (€88,492) bail after being charged with 10 counts of aggravated sexual abuse against four victims, three of whom were between the ages of 13 and 17 when their alleged attacks took place. The alleged incidents date back as far as May 1998.

Prosecutors allege that Kelly met one of the underaged victims at a restaurant where she was celebrating her sixteenth birthday party, and that he met another victim when she got his autograph after attending his trial for child pornography in Chicago in 2008. He was acquitted in that case.

The criminal charges in Illinois followed increasing scrutiny and protests over allegations of Kelly’s abuse of young girls and women, including parents who publicly accused Kelly of holding women against their will in what was described as an abusive and controlling “cult”, and a new documentary, Surviving R Kelly, in which women who said they had been victimised by the singer shared their stories.

In Tuesday’s tense interview, Kelly at times suggested the allegations against him were absurd, appealing to viewer’s “common sense”, and at other times said it was unfair to constantly return to his history. He emphasised that he had been acquitted in one case already.

Asked about the many accounts of abuse separate from that one case, Kelly called them “not true”.

“You have never held anybody against their will?” King asked.

“I don’t need to. Why would I?” Kelly said, echoing his lawyer’s previous argument that “he is a rock star. He doesn’t have to have non-consensual sex.”

Eric Clapton opens up – even on his bizarre racist period
10 Welcome to Dublin, unless you're black
Real news has value SUBSCRIBE