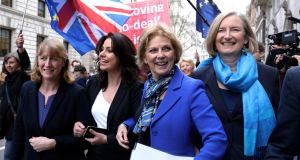 Three MPs have left the Conservatives to join the newly-formed Independent Group, accusing Theresa May of allowing hardline Brexiteers to take over the party.

Anna Soubry, Heidi Allen and Sarah Wollaston joined eight former Labour MPs in the new group, which now has the same number of MPs as the Liberal Democrats and one more than the Democratic Unionist Party (DUP).

Ms Soubry, an outspoken critic of Brexit who advocates a second referendum, said other Conservatives were close to leaving the party.

“The truth is the battle is over and the other side have won,” she told a press conference on Wednesday.

“Dear friends, now former colleagues, who share those one-nation values and principles will deny it. But I believe in their heads and in their hearts that they know it is over. Brexit now defines and shapes the Conservative party. I’m not leaving the Conservative party, it has left us. The modernising reforms that had taken years to achieve were destroyed,” she said.

The Independent Group was formed on Monday by seven former Labour MPs who were joined on Tuesday by an eighth, Joan Ryan. In a joint letter to the prime minister, the three departing Conservative MPs accused her of making no effort to build a cross-party consensus on Brexit.

“Instead of seeking to heal the divisions or to tackle the underlying causes of Brexit, the priority was to draw up “red lines”. The 48 per cent were not only sidelined, they were alienated,” they said.

“We find it unconscionable that a party once trusted on the economy, more than any other, is now recklessly marching the country to the cliff edge of no deal. No responsible government should knowingly and deliberately inflict the dire consequences of such a destructive exit on individuals, communities and businesses and put at risk the prospect of ending austerity.”

“Of course, the UK’s membership of the EU has been a source of disagreement both in our party and our country for a long time. Ending that membership after four decades was never going to be easy. But by delivering on our manifesto commitment and implementing the decision of the British people we are doing the right thing for our country. And in doing so, we can move forward together towards a brighter future,” she said.

A number of anti-Brexit Conservatives on Wednesday dismissed reports that they were poised to leave the party. But a Labour source said the Conservative defections showed that the Independent Group was a “Tory-establishment” coalition.

“What unites the 11 MPs is their business-as-usual support for austerity, corporate tax cuts and big-money corrupting politics,” the source said.