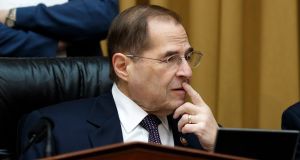 Pressure has intensified on US president Donald Trump after Democrats sent dozens of letters to government agencies and individuals demanding documents and information related to his financial and other affairs.

Chairman of the House of Representatives judiciary committee Jerry Nadler confirmed on Monday that his committee had sent letters to 81 government agencies and individuals including the White House and the FBI, as well as to people who previously worked for Mr Trump such as Sean Spicer, Hope Hicks and Steve Bannon.

“We have seen the damage done to our democratic institutions in the two years that the Congress refused to conduct responsible oversight,” said Mr Nadler. “Congress must provide a check on abuses of power.”

The sweeping move comes days after Mr Trump’s former lawyer Michael Cohen testified publicly before the House oversight committee, during which he accused his former boss of financial fraud by incorrectly stating his tax liabilities; abuse of campaign financing rules through the payment of hush money to women before the 2016 presidential election; and having prior knowledge of Wikileaks’s intention to release thousands of emails hacked from the Democratic National Committee during the election campaign.

Mr Trump is the subject of various investigations by congressional committees, which have become a greater threat to the president since Democrats won control of the House in November’s midterm elections.

These investigations are separate to the ongoing special counsel investigation into Russian interference in the 2016 election led by Robert Mueller.

Asked at an event in the White House if he would co-operate with the investigation, Mr Trump replied: “I co-operate all the time with everybody – and you know the beautiful thing? No collusion – it’s all a hoax.”

Press secretary Sarah Sanders said that the White House would review the judiciary committee’s letter and “respond at the appropriate time”.

The recipients of the letters have two weeks to comply with the request. If they do not co-operate the committee says it will subpoena the documents. It is also possible that individuals could be compelled to testify publicly before the committee.

In addition to the judiciary committee – which would ultimately decide whether to launch impeachment proceedings against the president – other committees are also stepping up demands for information related to the president.

On Monday, the chairs of the House intelligence, foreign affairs and oversight committees wrote to the State Department demanding information about communications between Mr Trump and Russian president Vladimir Putin in person and over the phone.

They are also demanding that translators who were present during Mr Trump’s private meeting with Mr Putin last year in Helsinki be made available.

Mr Nadler said over the weekend that the judiciary committee was seeking information into “abuses of power, corruption, and obstruction of justice”. He said impeachment was still “a long way down the road”, adding: “We don’t have the facts yet. But we’re going to initiate proper investigations.”

Senior Republicans have come to Mr Trump’s defence. Speaking shortly after Mr Nadler’s comments, House minority leader Kevin McCarthy said: “I think Congressman Nadler decided to impeach the president the day the president won the election. . . He talks about impeachment before he even became chairman, and then he says you got to persuade people to get there. There’s nothing that the president did wrong.”

Other senior Democrats have also said in recent weeks that they believe Mr Trump obstructed justice – an impeachable offence.

Adam Schiff, the head of the House intelligence committee, said he agreed with Mr Nadler that the president had obstructed justice, arguing there was “direct evidence” of collusion between Mr Trump’s campaign and Russia.