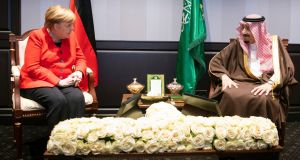 The timing of the Arab-EU summit, which concluded at the Red Sea Sharm al-Sheikh resort in Egypt on Monday, could not have been worse. Brexit overshadowed the first gathering of leaders from these closely-connected regions, while the deeply-divided Arab countries are politically and economically stressed and Europe is squabbling over migration from the Arab world and Africa.

Egyptian president Abdel Fattah al-Sisi, the summit host, called on participants to resolve differences, forge a common strategy on terrorism and co-operate on development and trade. The fact that the summit took place at all and convened in Egypt is seen as a diplomatic boost for Sisi, who has cultivated Cairo’s ties and trade with Europe but remains sharply criticised for domestic repression.

Although 40 senior figures took part in the two-day event, among notable absentees were half the rulers of the 22 Arab League states, some due to ill health, others politics. Uninvited Syrian president Bashar al-Assad was in Tehran for discussions with Iranian president Hassan Rouhani and supreme guide Ayatollah Ali Khamenei.

In the final communique the sides pledged to continue dialogue, strengthen their partnership, regulate migration, recommit to the two-state solution of the Palestinian-Israeli conflict, and end the conflicts in Syria, Libya and Yemen. The EU and Arab leaders, who agreed to meet again in Brussels in 2022, avoided sensitive topics and were short on specifics.

Sisi’s vigorous rejection of European criticism of mass detention of secular dissidents and Muslim Brotherhood members, and executions of convicted “terrorists”, prompted the summit to steer away from the dismal human rights records of Egypt, Saudi Arabia and other Arab states.

European countries remain as divided on key issues as the Arabs. Britain and France continue to provide arms for the Saudi-led war on Yemen, whereas Germany has halted weapons sales to the Saudis. Hungary, Poland and Austria refuse to receive migrants while Germany, Italy, Greece, France, Malta, and Cyprus are struggling with more than they can manage.

Europe is committed to the 2015 deal with Iran to lift sanctions in exchange for curbing Iran’s nuclear programme; Saudi Arabia and the Gulf states seek to overturn the agreement. Iraq and Syria call upon reluctant European and Arab states to repatriate citizens who joined the Islamic State terror group now that its territorial caliphate has been dissolved.

After the summit closed, Britain created fresh difficulties for Lebanon by designating Hizbullah a “terrorist” organisation, even though it has deputies in Lebanon’s parliament and ministers in the newly-formed government.