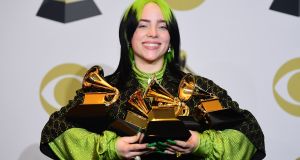 The 62nd annual Grammy Awards anointed a new star in Billie Eilish, even as the mood Sunday night was darkened by the death earlier that day of basketball great Kobe Bryant, who spent much of his NBA career playing at the Staples Centre, the arena where the show was held.

Eilish, an 18-year-old auteur with a moody and idiosyncratic aesthetic, won five awards, including the four most prestigious and competitive prizes – album, record and song of the year, and best new artist. She was the first artist to sweep the top awards since Christopher Cross in 1981, besting competition from Lizzo, Lil Nas X, Ariana Grande and others.

Bad Guy, an international No. 1 hit, took record and song of the year – the latter prize recognises songwriting, while When We All Fall Asleep, Where Do We Go? won album of the year, as well as best pop vocal album.

The Irish Times described the teenage pop sensations’s debut album as “an exceptional body of work. This is a clear portrait of the artist and an in-depth insight into her world”.

Irish band The Cranberries were nominated in the the best rock album category for In The End, the last recording made by singer Dolores O’Riordan before her death in in 2018. They lost out to Cage the Elephant with Social Cues.

Rodrigo y Gabriela, a Mexican acoustic guitar duo who began their career after they moved to Ireland in 1999 – even taking to busking on Dublin’s Grafton Street – won the best contemporary instrumental album for Mettavolution. “To escape everyday strife, Mettavolution provides a ticket to a palatable parallel universe,” was The Irish Times verdict on the album

When accepting the award for best new artist, Eilish recognised the fans – even other artists’ fans, who, she said, would surely be dogging her for years. “I love all fandoms,” she said. “You guys make this worth it.” Finneas O’Connell, her brother, accepting with her for song of the year, noted that they record together in a bedroom in their family home. “This is to all the kids that are making music in their bedroom today,” he said, holding the trophy. “You’re going to get one of these.” Finneas, as he is known, also won producer of the year and an engineering award.

Lizzo and Alicia Keys set a mournful and celebratory tone right from the start of the show, with both addressing Bryant’s death in a helicopter crash. “Tonight is for Kobe,” Lizzo announced as the show began, and went straight into a bold, full-throated medley of her songs Cuz I Love You and Truth Hurts, backed up by a miniorchestra and surrounded by ballerinas with otherworldly lights in their tutus.

Keys, the host for the night, then walked solemnly to the stage and said softy, “Here we are together, on music’s biggest night, celebrating the artists that do it best, but to be honest with you we’re all feeling crazy sadness right now. We’re literally standing here heartbroken in the house that Kobe Bryant built,” Keys went on to say. Keys then invited members of the group Boyz II Men to the stage and sang part of their elegiac song It’s So Hard to Say Goodbye to Yesterday with them.

Lizzo, a charismatic and outspoken performer who had worked in obscurity for almost a decade before her breakout last year, won three awards, but all in lesser categories. Truth Hurts, her breakthrough track, won best pop solo performance, while Jerome won traditional R&B performance and the deluxe version of her album Cuz I Love You took urban contemporary album.

Lil Nas X, a gleeful master of internet memes, won two for his “country-trap” hybrid Old Town Road: best pop duo/group performance and best music video. Well before Bryant’s death, a degree of anxiety had hung over the Grammys, after the recent removal of the head of the Recording Academy, the organisation behind the awards – a clash that brought out accusations of vote-rigging and sexual harassment and criticisms of not enough progress on the academy’s stated goals of becoming more diverse and inclusive.

Keys seemed to obliquely allude to those issues – and more – in a speech and piano medley in which she played with the lyrics to Lewis Capaldi’s ballad Someone You Loved (a nominee for song of the year). “It’s been a hell of a week, damn,” she said, twinkling chords on the piano. “This is a serious one. Real talk – there’s a lot going on.” She added, “It’s time for newness. We refuse the negative energy, we refuse the old systems.”

She also took aim at President Donald Trump, saying he should be replaced by Bronx singer-rapper Cardi B.

There were other nods to Grammy controversies. After Tyler, the Creator won the trophy for best rap album for Igor, an ambitious and genre-defying album, he said he was grateful for the honour but that the categorising of his music as rap still felt like a “backhanded compliment”.

“Whenever we – and I mean guys that look like me – do anything that’s genre-bending or anything, they always put it in a rap or urban category,” Tyler said backstage. “When I hear that I’m like, ‘Why can’t we just be in pop?’”

Hours before the show, the news of Bryant’s death led to gasps in the press room at the Staples Centre, where championship banners Bryant helped the Los Angeles Lakers win hang from the building’s rafters, along with his jerseys. Flags outside the arena were lowered to half-staff as preparations for the event continued.

All but nine of the Grammys’ 84 awards were given out before the TV broadcast, in a separate “premiere” ceremony that was plagued by celebrity absences – but also featured nonstars celebrating how a Grammy can be a career-defining moment. Early prizes were sprinkled among Lizzo, Eilish, Beyoncé, Lil Nas X, and Lady Gaga. Beyoncé’s concert special Homecoming won best music film. Michelle Obama, meanwhile, won best spoken word album for the audio version of her book Becoming. – New York Times

The Call of the Wild: Harrison Ford in one of his most engaging performances
5

Welcome to Sligoville: The story of the Irish in Jamaica
8