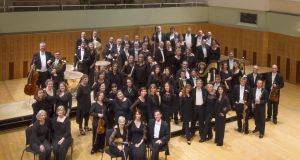 The RTÉ National Symphony Orchestra. What is new in this election is that the country’s orchestral life comes in for a mention in both Fine Gael and Fianna Fáil manifestos. Photograph: RTÉ

Even if I hadn’t heard any news for months I would have been able to tell you when the general election was called. You just can’t miss it when a carelessly attached election poster is so low on a pole that it almost takes your eye out.

What you can miss, of course, is what this, or any other general election might mean for culture and the arts. Housing, pensions, the health service and rural infrastructure all command great attention for understandable reasons. But it wouldn’t be surprising if all televised debates and other broadcast discussions were to pass by without a look-in for the arts.

The cultural sections of election manifestos always make for interesting reading. Wonderful-sounding aspirations rarely have detail. Proposals are mostly aspirational rather than costed. This, presumably, means that whatever the intended real-world outcomes are, they have not been factored in to any budgetary strategy. And the numbers that are given don’t always match up.

Take the Green Party, for instance. Its manifesto, Towards 2030: A Decade of Change, makes a plausible promise of €5 million per year in matching funding for organisations in “rural and peripheral communities”. But what is anyone to make of the party’s proposal to bring Arts Council funding “back up to 2008 levels of €82 million, with a view to doubling investment in the Arts Council to a total of €130 million over the next six years”?

Why not bring funding back up to the higher level of €83 million from 2007? Why not acknowledge the fact that back in the noughties the council had declared a need for €100 million? And why not use the correct figure for the doubling? The council’s current grant-in-aid is €75 million. So doubling it would require €150 million not €130 million. An error of just over 13 per cent.

The Green Party may well be a power broker when the results are in, and it’s good to know the party’s heart is in the right place. But the power is altogether more likely to rest with Fine Gael or Fianna Fáil.

Fine Gael says that “in 2017, Leo Varadkar committed to the doubling of expenditure on arts, culture, heritage and the Irish language by 2025”. Oh, no, he didn’t. What he said in Taking Ireland Forward, issued as part of his campaign to become leader of Fine Gael, was, “We will double the Government budget for arts, culture and sport over seven years.”

So, not only have the areas covered been changed, but, since there was a Government budget announced just months after this, his pledge is actually deliverable in 2023 not 2025. That mis-timing of two years is an error of nearly 29 percent.

Fianna Fáil’s manifesto, An Ireland for All, promises to roll out the Creative Schools initiative to all schools, rather than just those who apply for it, at a cost of €2.7 million. The party will also “fully protect Arts Council funding” (no numbers attached), but will “boost Heritage Council funding by €5 million”.

What is new in this election is that the country’s orchestral life comes in for a mention in both Fine Gael and Fianna Fáil manifestos.

Fine Gael says, “We will develop initiatives so that the national cultural institutions go on tour to towns across the country and enable greater national touring programmes by artists. Included in this will be the National Symphony Orchestra which, funded by the Department of Culture, Heritage and the Gaeltacht, and residing in the renovated National Concert Hall, will be fully staffed and will offer a national touring programme and educational and outreach programmes.”

Fianna Fáil declares a slightly different goal, to “secure the future of our orchestras”. The manifesto says, “The orchestras are a national treasure. They have developed a tradition of musical excellence that has been built up painstakingly over decades and are a key part of our national cultural life. Fianna Fáil is committed to ensuring at this vital crossroads that the two orchestras are protected.” And the party says, “We will support the recommendation of the Boaden report that the National Symphony Orchestra would be established as a national cultural institution in its own right.”

It’s interesting that, while Fine Gael is more ambitious in talking about national touring (currently in a lamentable state), and educational and outreach programmes (which are paltry by comparison with international norms), Fianna Fáil takes care to mention two orchestras, so that the RTÉ Concert Orchestra, which is due to become RTÉ’s only orchestra, will also be protected.

Given RTÉ’s recent track record in its treatment of the orchestras and the extent of the financial woes which the national broadcaster seems unable to manage, it may well be that the Concert Orchestra now has a less secure future than the National Symphony Orchestra.

Maybe it’s time to bite the bullet and revisit the 1950s campaign launched by composer Aloys Fleischmann for a publicly funded orchestra to be based in Cork. He lost that campaign and was given the small but very valuable substitute of a Cork-resident string quartet. That residency has been dismantled, and the ConTempo Quartet, which began servicing RTÉ’s quartet requirements in 2013, has quietly been dropped by RTÉ.

The ramifications of relocating the Concert Orchestra to Cork would be complex. But having an orchestra of that size in the country’s second city would bring Ireland a lot closer to European cultural norms.