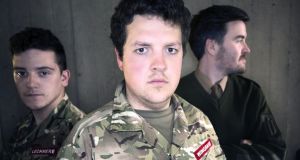 Opera in the cinema may be all the rage. But opera on television has a much longer history, dating back to the earliest days of the medium in the 1930s.

Today’s cinema concentrates on bringing stage productions to a wide audience, though there have of course been ventures by major directors into the realm of opera on the big screen, notably in the 1970s by Joseph Losey (Mozart’s Don Giovanni) and Ingmar Bergman (Mozart’s Die Zauberflöte), although Bergman’s project was originally made for television in Sweden.

The first opera written specifically for television was Gian Carlo Menotti’s Amahl and the Night Visitors, commissioned by NBC and first broadcast by the network on Christmas Eve 1951.

The BBC began broadcasting specially commissioned operas in 1956, and Enniskillen composer Joan Trimble was the first woman to write an opera specifically for television. Her Blind Raftery, which was transmitted by the BBC in May 1957, is not the only Irish connection to the composing of television opera.

Telefís Éireann commissioned AJ Potter’s opera Patrick, which was recorded in 1964 and broadcast the following year. Scottish composer John Purser, whose parents were Irish, wrote The Undertaker for Scottish Television in 1969. And Gerald Barry’s second opera, The Triumph of Beauty and Deceit, was commissioned by Channel 4 and broadcast in 1995.

One way of looking at operas specially commissioned for television is that they should be works which “can only be realised on the small screen”. That was Channel 4’s view of The Triumph of Beauty and Deceit and the other operas that it commissioned in the 1990s. And that was pretty much the view of the BBC when they commissioned an opera from Benjamin Britten, Owen Wingrave, which was first broadcast in 1971.

It has proved to be a pie-in-the-sky way of looking at the issue. Composers want to have their operas presented on stages around the world, the more often the better. The ultimate success of operas written for television has been decided by their fate in conventional performance settings.      It’s a topsy-turvy situation. Television opera triumphs when it succeeds in the opera house. And opera houses love to draw attention to the high numbers they can reach either through television or in high-definition screenings in cinemas.      Britten’s Owen Wingravewas written by a composer not enamoured of television. He did not even own a television set until he received one as a gift in 1973, and his power and influence were such that he was able to have the opera staged as soon as the BBC’s exclusive right expired.

Owen Wingrave, with a libretto by Myfanwy Piper after the short story by Henry James, tells of a typical Britten outsider, the Wingrave of the title, whose pacifism leads him to turn his back on the army and thrusts him into fatal conflict with his military family.

The opera, which divided opinion on television and continues to do so on stage, was given its Irish première by Opera Collective Ireland (the former Irish Youth Opera), using the highly effective reduced orchestration by David Matthews. I caught up with it in Dublin on Friday.

The atmosphere of Aedín Cosgrove’s wall-dominated set has an oppressiveness to match the experience of Wingrave himself. As conveyed by Tom Creed’s production, the work comes across as a wordy, attitudinal piece, populated by individuals as unbending and unswerving in the repetition of their views as British foreign secretary Boris Johnson in reasserting the benefits of Brexit.

This is all the more perplexing given the vividness of the contribution of the Irish Chamber Orchestra under the alert baton of Stephen Barlow.

The Arts Council designated national provider of main-scale opera that will emerge from the merging of Wide Open Opera and Opera Theatre Company has advertised for an executive director.

The advertisement (url.ie/11xyx) reveals that the new company has chosen to adopt the name Irish National Opera, making it the third company to do so, following the original Irish National Opera, which toured piano-accompanied productions from the 1960s to the 1980s, and the failed enterprise created by arts minister Martin Cullen in 2009, which managed the rare feat of coming into existence, just, and disappearing without presenting a single production. The deadline for applications for the new post is Friday, October 6th, with interviews scheduled for October 24th and 25th.

Another new venture, Sounding the Feminists, held its first public meeting last week and the event, which took place in the Dublin offices of Imro, was streamed live online.

It’s usually a strange experience to witness the start of what promises to be an important movement. Aspirations mingle deceptively with goals, and the importance of any particular declaration can depend as much on who is making it as on what it’s about. The doers may deliver much more than the thinkers.

Wednesday’s meeting certainly laid out what will be a very full agenda, and some of the contributions made by members of the establishment made it very clear how steep the climb is actually going to be. The full meeting can still be viewed at url.ie/11xyy.